What Does a Community in Fortaleza Brazil Discover as they Exercise their “Right to Research”?

The following post is the second in a four-part series on the right to research at PalmasLab. The first post summarizes the development of PalmasLab’s inaugural research project – a mapping of community wealths, poverties, desires and aspirations – through a Participatory Action Research process with MIT CoLab.

“So, we discussed and we developed this new survey… We did focus groups, we talked between us, residents of Conjunto Palmeiras, because as residents [we] know our problems. This is the idea of PalmasLab. We work on solutions from the bottom up. So we talked to community agents that know the problems and that fight to resolve the problems – community leaders, people who have fought for the community since the beginning. We arrived at these four words: wealths, poverties, desires and aspirations that affect the community ecosystem.” 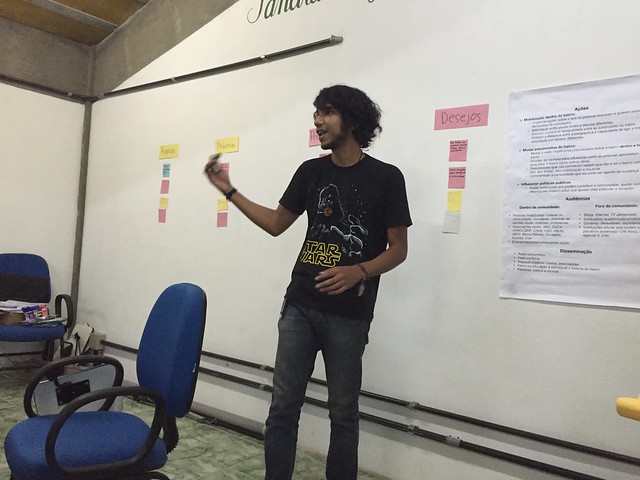 In January of 2016, the PalmasLab team focused their efforts on implementing the community survey they had created. They worked with a group of youth participants in a long-standing community activism course to introduce them to the research framework, to lead them in conducting the survey in over 200 households, and to engage in collective analysis and reflection. I joined the team in this process as a continuation of the collaboration that CoLab Research Associate, Alison Coffey, and I had started with PalmasLab the previous summer. First, we took the participants, referred to as consultores comunitários (community consultants/agents), through an exercise of naming wealths and poverties in the neighborhood and discussing their own desires and aspirations. The concept resonated with the consultores, who contributed inputs to the survey based on their own understandings of and questions about community wealths and poverties, especially in the area of security and policing. 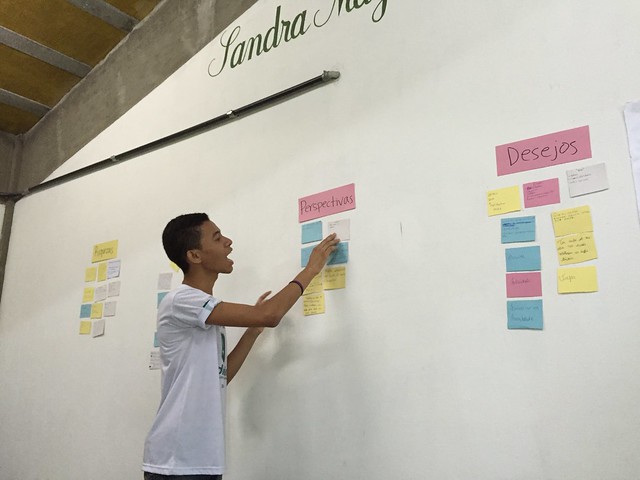 During survey implementation, the consultores were surprised by the willingness of residents to open up their homes and be interviewed; often the survey led to larger conversations about the community. Each day after fieldwork the group brought back a wealth of information about the individual experiences, hopes and grievances of residents, in addition to their own reflections about what they were seeing and experiencing. Through these discussions, we realized the survey process was providing us with two sources of rich information: the survey data itself and the reflections and insights generated through the process; we worked to capture both. 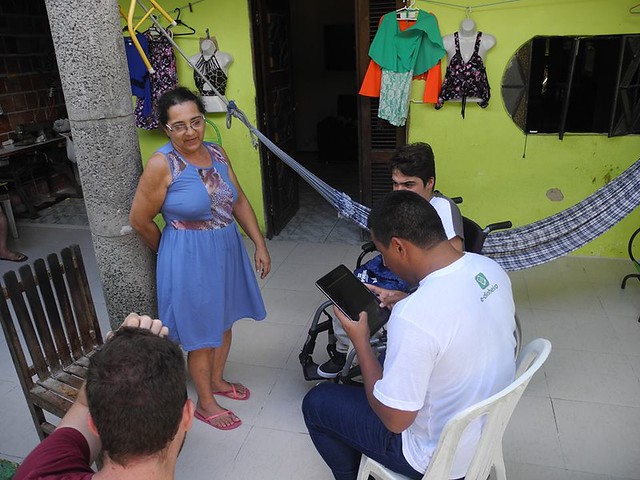 In their reflections on the experience, many of the consultores expressed surprise that they held many of the same views with residents they had previously assumed to have little common ground with. For example, many of them found that residents were highlighting “poverties” in the two areas that they themselves felt were major priority areas – a need for more opportunities for leisure and concerns about policing and security. The consultores also emphasized the power of individual stories – recounting specific conversations they engaged in that taught them something new, made them hopeful or angry, or challenged a previously held assumption. As one participant explained, “it is important to get to know people’s reality; you see things that you aren’t used to seeing, so it’s good for changing your point of view.” 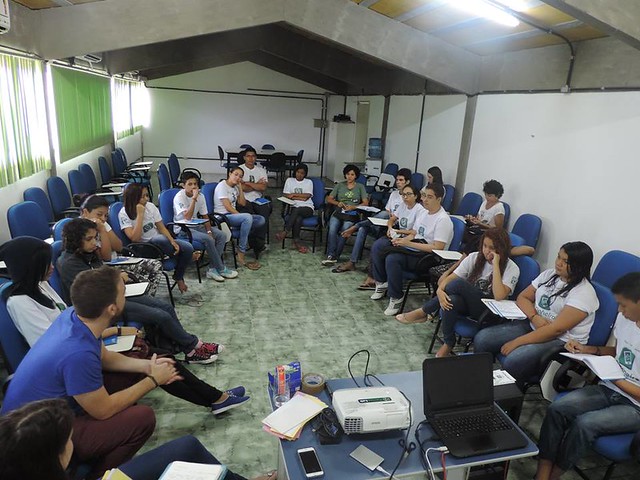 Reflection session with the consultores at PalmasLab

In a collective analysis session run by the PalmasLab team, the consultores interpreted and debated some of the initial survey results. One issue that emerged for the group was the fact that most residents did not express ideas about what they would do to address the challenges that they identified in the survey. Although most residents reported to believe in the collective capacity to drive change, when asked what their individual contribution might be, many chose not to respond, or answered that they would join an effort if it were already in motion. As PalmasLab team member Erberson explains: “You ask people what they would do to change – ‘What would you do?’ And people say, ‘Well if there was a movement I would participate.’ The first step is hard, but after the first step things are more fluid, people see that something is happening. The first step is hard but I think that we are almost there, we aren’t there yet but almost. I think the research will help us in this aspect.” 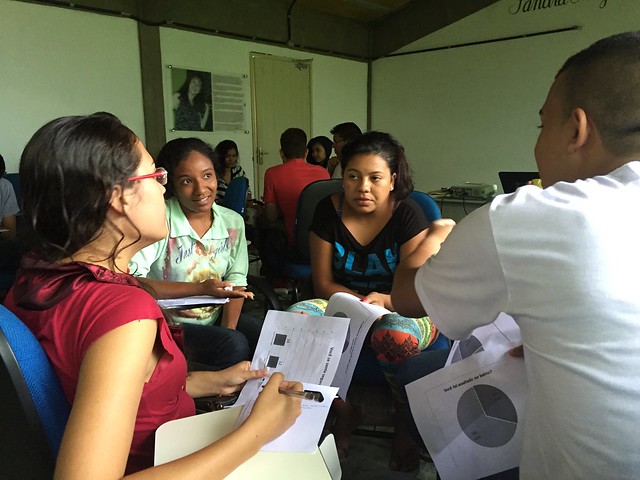 Many of the consultores understood the first step as providing space for individuals to be listened to. As a way to act on this, they proposed finding ways to reach people at an individual level in their homes, in order to draw them out to join a collective effort. Disseminating information was also highlighted as a priority action, and a way to address some of the concerns around security, for example. One participant described that she had become informed about her rights as a way to defend against police abuses: “What did I do to resolve this problem? It was with information, knowledge. I started to get informed about my rights to be able to defend myself with them, when they [the police] do the wrong things…If I hadn’t had that knowledge they would have done whatever they wanted.” 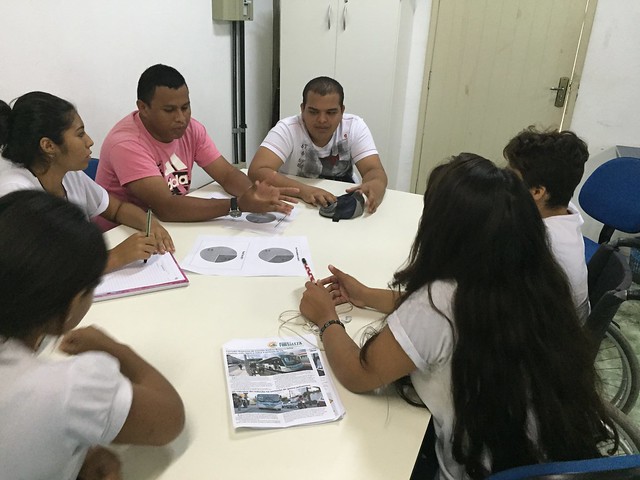 Collective analysis session with the consultores

Finally, like the PalmasLab team, the consultores felt that Conjunto Palmeiras’ rich history of mobilization and struggle presented a valuable source of shared identity and pride. As Luiz put it, “identity is one of the greatest wealths; when everyone feels the same pains, indignations and sense of pride, we are able to be united in the development of the neighborhood.” Many of the consultores suggested that teaching community history in schools and other local forums would be a strategic action, as familiarity with the past could facilitate collective action in the present. As one participant explained, “I think if people knew the story, they would wake up to move and fight to improve the neighborhood like before.”