Posted September 9th 2014 at 9:56 am by Marisela Gomez
in People Matter: The Human Impacts of Planned Redevelopment

Who are we attempting to benefit and how will this be measured? 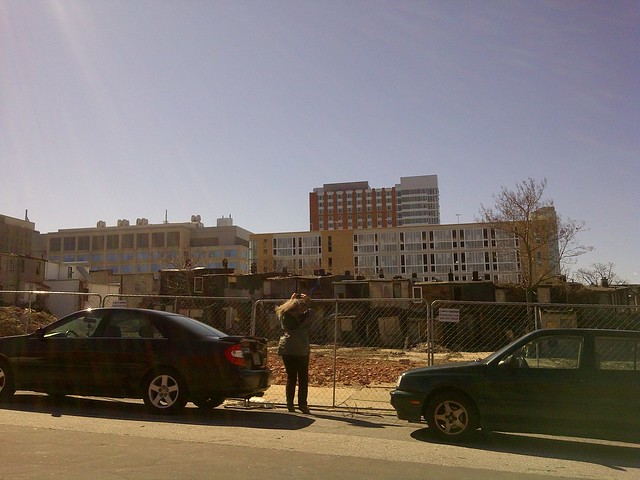 In the US and abroad examples abound of development projects and processes which remove the ‘eye-sore’ of the targeted area by changing the faces of poverty, of people and place, by building structures which attract a different race and class of people. Where these projects occur range, from areas occupied by low-income and racial minorities to single public housing complexes. Such plans often result in either direct or indirect displacement. In the former, residents and businesses are forced to move to make way for the new population. In indirect displacement, new housing, product, and service costs are unaffordable to existing residents. When combined with new cultural norms that are unwelcoming to existing residents the result is often eventual displacement. (1,2,3) These patterns suggest that development seldom initially intends to primarily benefit the health or socioeconomic status of existing residents. Rather, it accommodates existing residents only in as much as that creates benefits for those with power in the planning and development process. (4)

Reconceptualizing the processes of redevelopment by asking at the beginning, ‘who are we attempting to benefit and how will this be measured?’ may lead to more equitable goals and outcomes instead of the often seen disproportionate benefit to powerful developers and stakeholders. (5) In the US, development projects are promoted as housing and economic development for those living in the targeted area but the disproportionate capital expansion for the developers, sub-contractors, real estate companies, construction firms, banks and mortgage lenders, and brokers-facilitated by public-private partnerships- has not been measured. (6) Most development projects result in capital expansion for these entities and temporary employment for local residents during the project’s construction phases with minimal or no new locally owned or co-op businesses. While new businesses may exist, inadequate workforce preparation of the existing population results in little benefit to local residents. The working assumption is that an increase in property values for existing owners will be beneficial to those who remain. This assumption gives no consideration to those who cannot afford the increased property tax and must sell. The same scenario is true for those who relocate out of the area into communities of higher SES who must pay an increasing portion of their income toward housing cost with little or no increase in income. (7)

In regard to affordable housing in new developments, weak policies and laws to assure construction or rehabbing of affordable units have been insufficient in addressing the largest gap in housing affordability and low-income renters recorded to date. (8) This disparity is a direct testament to the failure of redevelopment to address the needs of abandoned communities. Defining and making transparent the beneficiaries and goals, and measuring the accrued benefits is one way to proactively document how a development project will accomplish its goals while offering an avenue for accountability for all stakeholders. Reconceptualizing development as a process that benefits all stakeholders and redistributes benefit more equitably would require the presence of existing community members with decision-making power at the table before, during, and after the development project. Such a shift in development practices can mitigate potential displacement or offer appropriate assistance to minimize the impact of displacement. (9)

Finally, we must reconceptualize development to be ‘community’ development. It must address all the parts and systems that facilitate the health of people and places: housing, health, economic opportunity, education, transportation, recreation, security, and nutrition. (9) This requires that all these departments are at the table from the beginning to the end to assure that a primary goal and outcome of all community development processes is the health and well being of the impacted people.

1. Fried M. Grieving for a lost home. In Urban renewal: the record and the controversy. Ed Wilson JQ. 1964.The M.I.T. Press, MA. http://www.geos.ed.ac.uk/homes/tslater/Fried_GrievingforaLostHome.pdf

7. Results from the Moving to Opportunity experiment. http://www.nber.org/mtopublic/interim/Academic_Achievement.pdf

Marisela B Gomez is a scholar activist, physician and author of Race, Class, Power and Organizing in East Baltimore: Rebuilding Abandoned Communities in America, published by Lexington Books. She is director of Social Health Concepts and Practice in Baltimore, an action research organization focused on community development, social determinants of health, and mindfulness practices in social justice activism.