A Conversation on Economic Democracy in Boston 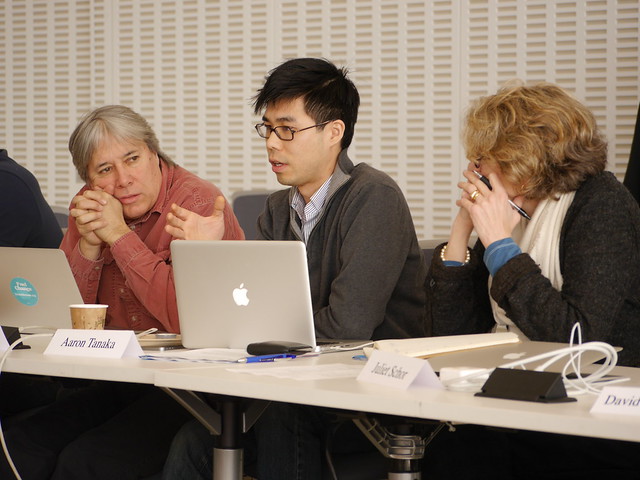 Aaron Tanaka, interviewed below, speaking at the Strategy Workshop.

A couple weeks ago, a meeting of minds took place around building a movement for alternative political and economic systems. The Next System Project, convened by the Democracy Collaborative, brought several leaders in the new economy movement together to refine ideas and plan for the future. I spoke with Aaron Tanaka, an attendee and the Managing Director of the Boston Impact Initiative, Co-Founder of the Center for Economic Democracy, and Co-Founder and former executive director of the Boston Worker’s Alliance about his work.

Danya Sherman (DS): The meeting was intergenerational; as a younger leader in the movement, how do you think about your work as it relates to previous generations of thinkers?

Aaron Tanaka (AT): I think the main differences I see between our generations of activists is that we are more grounded in grassroots organizing, more racially diverse, and ready to talk about the intersections of many movements which in the past were single-issue based. My orientation is rooted in people doing the work on the ground; all the conversations I want to have is anchored in that. So the nature of the folks I am working with may be very different than those working mainly in academic circles. My point of radicalization regarding the economy came when I was doing prison reform work, and I realized that you cannot abolish prisons unless you abolish unemployment, and you cannot do that without abolishing capitalism.

DS: Tell me more about your work.

AT: I’m working with two large initiatives right now that relate to economic democracy: the Center for Economic Democracy and the Boston Impact Initiative. The Boston Impact Initiative was started in 2012 by father-daughter team Michael and Deborah Frieze, who have a background of success in business and philanthropy and wanted to experiment with an impact investment fund. The goals are to bring capital to communities that have been excluded from access to capital and to demonstrate a model for social impact investors who want to carve out a piece of funds in their portfolio and make an impact locally. We are place-based, seeking to invest mainly in Roxbury, Dorchester, and other underinvested neighborhoods in the City of Boston.

I first became involved in impact investing through organizing around discrimination in employment practices towards previous offenders through the Boston Workers Alliance. At the BWA, we realized that while discrimination is a key issue, there simply aren’t enough jobs to go around. So I got involved in starting Roxbury Greenpower, a worker cooperative project to organize underemployed and unemployed people in Dorchester to create new jobs around recycling food waste. This project ultimately failed due to lack of capital, but was then successfully re-born as Cooperative Energy, Recycling & Organics (CERO). We realized through this process that to successfully form a coop we needed access to patient capital and substantial technical assistance. These are issues that many entrepreneurs in underinvested communities face, which is why I feel that while business development is important it needs to be connected to the broader movement on the streets that is calling for economic equity.

The Boston Impact Initiative is funding and supporting CERO along with many other partners (the Boston Center for Community Ownership, the Boston Worker’s Alliance, the Barr Foundation, and others). BII is currently a $5 Million pilot fund—which we plan to open up to other investors and probably triple by 2016—that funds mainly minority-owned businesses and non-profit organizations through grants, loans, and private equity. It’s an integrated model- to use the appropriate form of capital for the specific state of the business. We also help promote Direct Public Offerings (DPOs), which are like a crowd-sourced equity investment. We are often able to take on more risk than banks might be willing to do – for example, we have given out zero-interest loans- acknowledging that the current system of lending is exclusive and discriminatory.

The Center for Economic Democracy (CED) is a long-term political project. The idea is to work at the intersection of the funding world, think tanks, and grassroots organizing. It got started after a realization that grassroots organizing has to be at the center of long-term change: that those who are experiencing harm should be leading the movement. At the Boston Worker’s Alliance, I was running a radical base-building strategy and working with other issue-specific movements; while we all shared the anti-capitalist analysis, our work did not relate directly to the economy at all. Many movements do not because of fear of alienating funders, but more central is that we do not know what we want – we don’t have an alternative system to propose. We can do Marxist analyses of exploitation all we want but if we don’t have an alternative this can only go so far. Gar Alperovitz and I agree that the alternative is not going to capitalism and it’s not going to be socialism. So at CED, we use the term “economic democracy” – building off of generations of thinkers (these are not my ideas) – and framing it realistically and with ontological promise. The premise is about self-determination—that people should self-determine their economy. Within the American context, this idea is a rhetorical concept that holds promise because of Americans’ priding ourselves that we live in a democracy. If that’s true, we need a more robust and actualized version of democracy – what does that look like? What we have now is a democracy subjugated to capitalism. We use the term “economic democracy” because it allows us to talk about concrete models that exist now while also holding an analytical space that is long-term. Democratic planning is a key component for economic democracy. The literature on what this actually looks like is thin, though one model is Michael Albert and Robin Hahnel’s work on participatory economics. I don’t fully agree with it but it’s great that they are trying to sketch a full-scale alternative. What’s clear is that their vision and others like them are not intersecting with people who have the ability to popularize ideas with oppressed communities on the ground.

In a practical sense, CED started off with a $500,000 grant – making and funding pool to fund new economy projects. We’ve funded the formation Boston Jobs Coalition and give staff time and support to projects like participatory budgeting with the City of Boston, growing a community land trust in Chinatown, and using anchor institution strategies to build market share for co-ops. This summer we started a community finance group that is focused on engaging grassroots organizing. We are also funding eight organizations to do a learning and capacity building project around education and analysis for longer-term visions of alternative economies. We want to expand the definition of what economic justice organizing looks like, push it past organizing for a higher minimum wage and include proposals that both raise equity and control over our economy.

DS: How does your work connect with the energy around the Black Lives Matter organizing happening right now?

AT: These movements are connected – I don’t think you could abolish prisons without abolishing the system of white supremacy and neoliberalism that is driving the prison industrial complex. Ultimately we have to deal with the underlying economic system. People are saying – in the current movement – that the system is working exactly as it was meant to. The criminal justice system was built to regulate surplus populations. This is an essential moment. In the same way that Occupy was able to raise broad awareness on economic inequality, I hope this is the moment to raise broad awareness on the racism of the criminal justice system. But I hope we can continue to build the movement for a more viable alternative so that when there are these moments – these important moments of rage, solidarity, and existential healing – that they can help to build towards that alternative in a sustainable way. We are all talking about the same thing – a new democracy movement, and I believe that we need a coherent economic strategy to stay sustainable.

DS: For those looking to work in this field, what skills and capacities are most needed?

AT: I could definitely use the help of those with expertise in business development and technical assistance. Other gaps relate to understanding capital structures within investment scenarios, and helping small businesses negotiating terms with a lender or investor – so that you don’t get screwed. There’s also a whole question around policy regulations for the new economy and we need more research on that. I’m interested in looking at what it would look like, for example, to have a democratized city charter – what are all the ways that decisions get made and how do we democratize them – policing, budget, education, procurement, and more.

But in general, the biggest issue is the lack of funds. I don’t really think it’s an issue of people having skills, it’s that there isn’t enough money to hire people. For people with privilege and skills, how can they be creative about supporting themselves so that they can work with communities that can’t fund them?