Posted January 19th 2015 at 7:15 am by Acacia Robins
in Perspectives on Current Events

A Reminder from a Child: Dr. King was Murdered 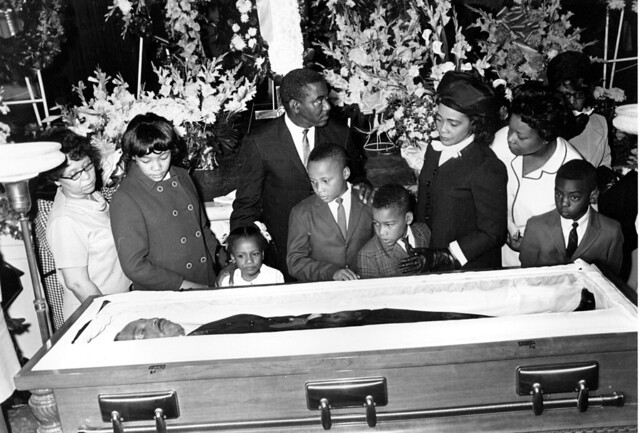 Two years ago, over a macaroni and cheese dinner three-year-old Henry stopped his Mother cold in her tracks as from his seat at the dining table she heard him singing We Shall Overcome.

She asked him where he learned that song. “At school,” he replied. Then he got out of his chair and with his body fully animated, told her why Martin Luther King, Jr. was shot. “He was a hero. People weren’t nice to Black people and he told them to stop it. And then they shot him. He was a hero.” Then he showed his mother how to march around the kitchen of their rented duplex. Everyday that week when his mother picked him up from preschool, Henry showed her a book that had a black and white photo of King’s body in it.

Henry went to a Montessori preschool in a small town in the Southern United States. The Montessori philosophy is centered on the “garden of truth.” Nothing gets sugarcoated (with the exception of Santa Claus—where his teachers instead demurred and advised the children to ask their parents). The Montessori philosophy is also focused on “following the child.” Each pupil dictates what subjects he or she will learn each day and all of the materials are kept within the children’s reach. If he chose to, Henry was free to hold onto the book with the photo of King’s body all day.

Exactly one year later, over a rare dinner with just the two of them, Henry’s mother told him that a long weekend was coming up, in recognition of King’s birthday. She asked him what he remembered about Martin Luther King, Jr. Henry stood up, eyes wide with the seriousness of what he was about to convey. “Martin Luther King was a great leader. He was outside of his hotel room when a man pointed a gun at him and shot him. An hour later Martin Luther King was dead.”

Then Henry sat back down and asked his mother if his daddy knew about Martin Luther King, Jr. “Yes,” she told him, “he learned about him a long time ago in school when he was little like you.”

“Well, I better remind him then, since it was such a long time ago,” he replied.

One response to “A Reminder from a Child: Dr. King was Murdered”