A Return to “Normal” for Black Men and Boys in Ferguson and around the Country? 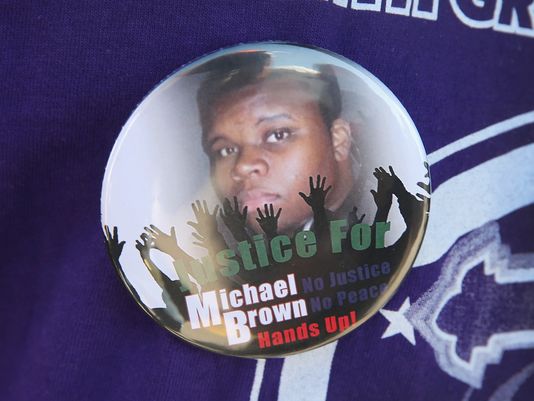 Driving through New York City streets in the wee hours of Monday morning, free of the usual anxiety that comes with trying to navigate the city’s gridlocked traffic when more cars are out, my older sister and I were finally able to have a real conversation.

Even though she’d been visiting for the past few days, we’d been so busy running around with her three kids— ranging in age from 21 months to 9 years– that we hadn’t had time to really check in. Weeks ago she’d sent an email about a Washington Post article titled: My son has been suspended five times. He’s 3. In the article, Tunette Powell, the mother of 2 black boys, aged 3 and 4 tells the story of how her sons have been suspended numerous times. Having spent a lot of time considering the patterns, she’d come to the realization that their behavior, though inappropriate, had not warranted such harsh discipline. She tells of her conversations with parents of white children who’d acted out in ways that were similar or much worst than her sons but whose punishments from their schools had been much less severe.

With my 9-year-old nephew having recently been unfairly suspended, my sister wanted to send the Washington Post article to his school principle. She hoped to spark a conversation about the role racial bias plays in criminalizing relatively minor offenses and draw attention to the key findings of a recent study quoted in the article: that blacks boys tend to be viewed as older and less innocent than their white peers. This often leads to them receiving punishments that are incommensurate with their misconducts.

Tunette Powell’s article was top of mind for me not because of my 9-year-old nephew but because we’d started talking about my 21-month-old nephew, Joshua. Joshua is brilliant. He has a 95% success rate at one of his favorite games, “Where is your blank?” where his mother calls out a body-part and he points to it. More in tune with pop culture than me, he can convincingly hum Pharrell’s Happy and Becky G’s Shower. Joshua is a sweetheart. He says thank you after you change his diapers. He gives hugs to anyone who asks. And, he blows kisses that could melt the coldest heart. But, Joshua is also aggressive and he has a temper. He does not take kindly to being messed with. At the tender age of 21 months his vocabulary isn’t quite sharp enough to argue with his siblings when they take his ball or refuse to give him an apple; but his teeth and nails are. So he scratches and bites until he feels you understand him.

My sister and I talked about our concerns for Joshua as we drove home. Would the world realize his brilliance? Would his aggression get in the way? With the odds stacked against him as a black boy in America getting his temper under control was a huge priority; what were the best ways to do that? Even still, if she were successful on that front, how much would that protect him?

As we inched closer to home, we switched topics and I eventually drifted off to sleep.

The next day, I woke up to the news of Mike Brown’s death.

Mike, an unarmed 18-year-old black boy, walking in the street with his friend, was gunned down by a Ferguson, Missouri cop on August 9th. Most sources report that Mike held his hands up high in a clear sign of surrender, but the trigger-happy cop fired shot after shot anyway, eventually shooting him dead and leaving his bullet-riddled body to lay on the street. Since Mike’s brutal death, protests have erupted in Ferguson. The Ferguson police department has famously taken an insane militarized response to the protestors; using drones, tear-gas, rubber bullets and tankers on protestors exercising their First Amendment Rights.

Reading the articles, tweets, and analysis about Mike’s murder, the resulting protests and the militarized police response I am heart broken for Mike’s friends, family and community. I’m heartbroken too for black boys and men and those of us who love them; And, I’m worried again for Joshua. For Mike’s death, just the most recent in a long line of killings of innocent black boys and men is rooted, I believe, in the same reasons little black boys get suspended more often, the same reasons I worry about Joshua: the pervasive fear throughout this country of black boys and men, a fear that leads to their right to innocence often being stripped away.

My sister and I ended the conversation about Joshua on Monday morning brainstorming ways to curb and channel his aggressiveness. We talked about enrolling him in karate classes, about carving out more 1-on-1 time with him, and came up with a list of other black moms my sister could talk to. Our conversation focused entirely on the things my sister had control over. Mike’s death however makes me wonder anew, what good any of these strategies are, in an America that fears him simply because of his race and gender and their implicit biases?

In a NYTimes article published today, a local storekeeper in Ferguson, referring to the protests and reactions to Mike’s death, is quoted as saying he wants things to return to normal. For black men and boys in Ferguson, and across the country, I wonder, what does “normal” mean?