A Sensory Approach to a Megacity Main Street

This is the last in a series of four posts on the impacts of pedestrianizing Bogotá’s Carrera Séptima. To learn more about pedestrian main streets, scroll through this global conversation on the topic.

This video begins with the words “Cierra los ojos,” or “close your eyes.” Then you hear a mix of voices and sounds representative of what you hear on Bogotá’s Cra. Séptima. Finally, you see the experience of a regular person walking from beginning to the end of the street’s pedestrian portion on a common day. 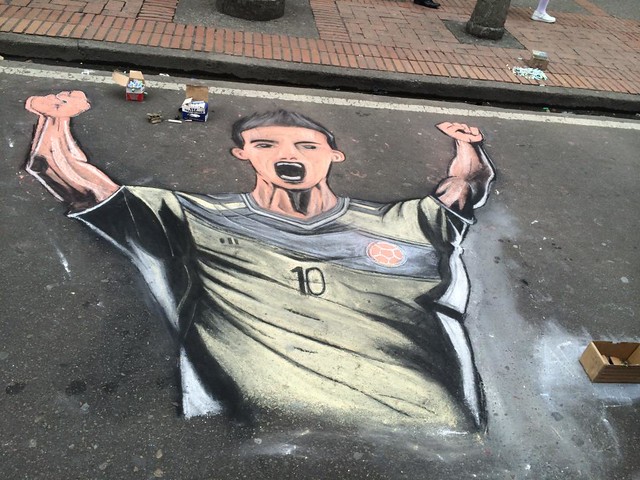 We (four engineering students at Universidad de los Andes) want to transport you (the viewer) to our bustling main street, even if you’ve never been to Bogotá before. The video is in Spanish, but you can get a feel for life on the street, through sounds and images, even if the words are foreign to you.

We recorded the opening sounds on the same street segment, but on different days and at different times of the day. We also recorded the whole journey starting in Plaza de Bolivar and ending just before 24th Street. In addition to capturing the pedestrian journey with a video camera, we also took photos, which we included in 1-second bursts throughout the video.

In order to capture enough material, and different kinds of people and situations, we filmed the journey on three different occasions. The experience of each of those walks was very different. The street is changing constantly and it was full of life and movement on each journey we took.

We focused on places and situations that seemed shocking or surprising. We conducted random interviews with people who caught our attention through their behavior or their work. Every time we thought that there were no more stories to be told, another experience appeared and we couldn’t let it go.

For us, analyzing the life of Carrera Séptima was not simply an academic exercise for the university. This project allowed us to experience our city in a new way. For that reason we invite you to watch our video “Vida y cotidianidad en la Carrera Séptima”.