Posted July 30th 2015 at 8:58 am by Rounak Maiti
in Audio Portraits, Listening to the City

A Soundwalk through the newly Gentrified York Boulevard in LA 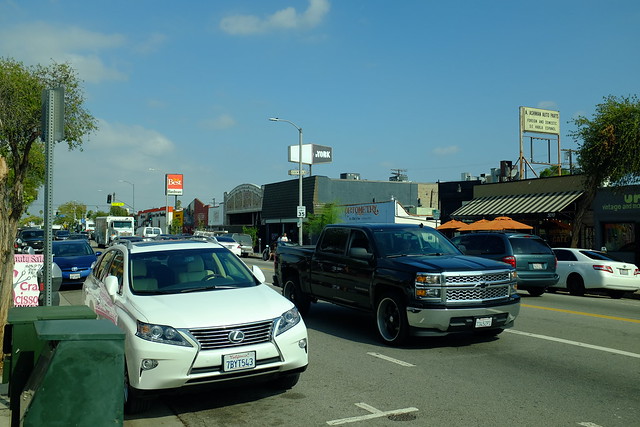 Los Angeles is a sprawling city that is constantly in flux. The daily rhythms of rush hour traffic dominate most of the auditory space within the city and the phenomenon of gentrification works it’s way through the city, always changing and re-imagining. York Boulevard, located in the Highland Park neighborhood in North East Los Angeles is one site where these transformations are most apparent.

Interested in the contradictions there, I set out on a soundwalk with some of my colleagues at Occidental College’s Critical Making Studio to study some of the sonic qualities that underline the urban facelift York Boulevard is currently experiencing. 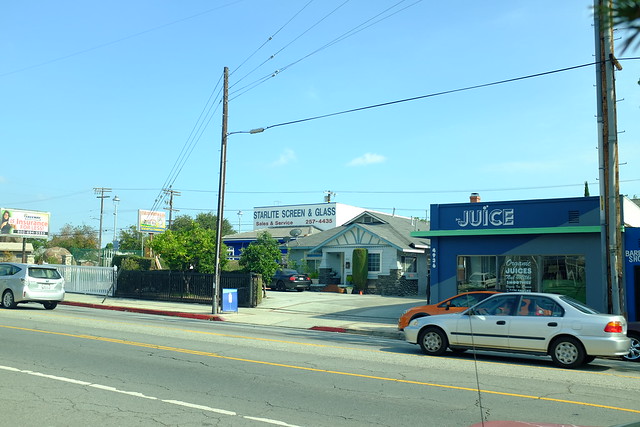 York Boulevard, near the corner of Avenue 50

Our first stop was York Park, a brand new addition to the corner of Avenue 50 and York Boulevard. The sharp contrast between the chic reptilian themed park and adjacent juice bar against the Screen and Glass Service Center (pictured above) is arresting. It’s a visual testament to the tension between the area’s new gentry and the older working-class population. 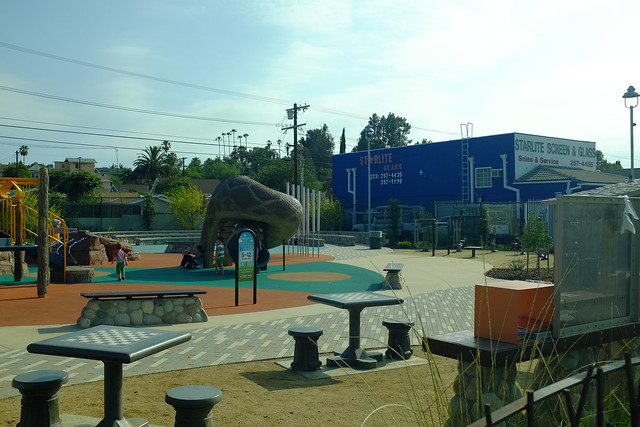 The park, furnished with chess tables, an open library and public seating, welcomes an audience beyond those looking for playtime. The most interesting aspect of the park, resonating with children and adults alike, is an instrument installation bringing together mallets, xylophones, and bongos. This installation invites the public to engage with the space on a deeper sensorial level than just the visual. It also makes the park’s sonic environment much more interesting than if the monotonous and harsh sounds of surrounding vehicular traffic were left to flare uninterrupted or unmasked. As multimedia artist Charles Morrow argues is the purpose of sound art, the installation “direct[s] the visitors’ perception of scale, balance and intimacy.” 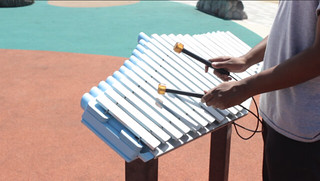 In the park, visitors are given respite from the all-too-familiar street soundscape and their sonic experience is transformed. The eerie combination of a xylophone and bongo drum jam with the sounds of children laughing, screaming and playing. It provides a sweet though unfamiliar symphony for this quiet intersection typically
accustomed to passing cars.

Our soundwalk continued into Café De Leche, an establishment only a few years old. The café is usually visited by young-professionals: new-comer entrepreneurs, musicians, artists and college students. Again, this is in great contrast with the Hispanic/working class Hispanic population that Highland Park is usually associated with. The soundscape inside of this café might be the very soundtrack to gentrification. Conversations about “what Horchata is” reveal the novelty and confusion surrounding a traditional, authentic beverage that long time residents of LA and Highland Park regularly consume. Ambient indie music and sounds of coffee machines are relatively new sonic entries to York Boulevard. Even then, they are confined within the four, air-conditioned, overpriced walls of Café De Leche. 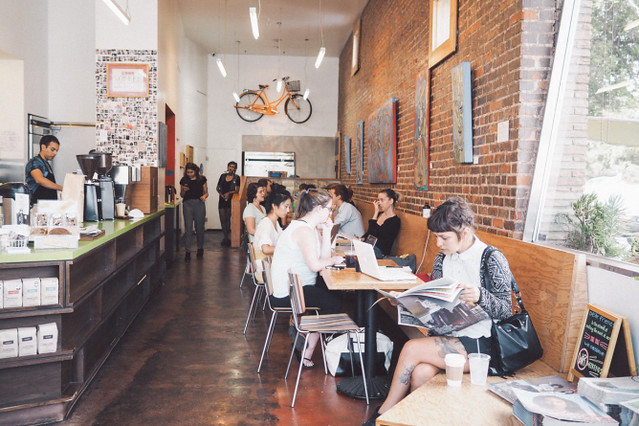 Near the end of our walk, we record a representative of KPCC Southern California Public Radio recording vox pops of Occidental College students in advance of a visit by our most famous alumnus, President Obama. Moving back outside after Café De Leche, we are reminded of how aggressive vehicular traffic can be. A passing motorcyclist, donning a leather jacket, black jeans and shaded helmet, completely dominates the soundscape for a few seconds. A not so subtle reminder that even as Highland Park’s sounds change as the area gentrifies, the rumbling of motor vehicles continues to be the most audible vibration on the streets.

Post and Photos by Rounak Maiti, unless otherwise noted.

This is one of many posts where CoLab Radio contributors take readers and listeners on a soundwalk in their city. Read and listen to the previous soundwalk in the series from Houston, Texas here. If you’d like to submit an example from your own city, see the easy steps here.