Painting the Dream Machine, which is now for sale.

What is your true desire for your life, and for your community? When was the last chance you had to think about this? So often, the structures we operate within muffle our dreams. Affirmative Art is a process in which people can express their deepest desires.

This spring, a team of three artists (Eirik Trondsen, Marcus Christensen, and Claudia Paraschiv) went on a cross-country Affirmative Art tour, hosting workshops in communities to empower individual dreams, and collect them as a constellation of visions of purposeful lives.

The Red Line Gallery in Denver is a place where social justice and fine art uplift each other in a productive feedback loop. We were lucky to have Michael Anderson, a long-time local activist, connect us to the gallery.

We held the workshop in the Reach Studio, a space for “socially engaged artists who may have experienced homelessness or hardships to collaborate, create, and share ideas in an inclusive community.” The many people who attended were experienced in art and social justice. Several were already looking to further personal initiatives of community engagement through creative means.

With a room full of practicing artists before us, we decided to try something new: after drawing your dream, the others around the table could interpret what they saw. The artists themselves didn’t have to speak for their drawings until after they heard from the others.

Artist-activist Zee poses with his dream and part of the group at Red Line Gallery.

Zee drew a palm tree for his self-portrait. Some artists around the table responded:

“The palm tree again…I see when the coconuts come off and start sprouting.”

For others, this interpretation inspired honest reflections and encouragement in a way that didn’t happen when people directly stated their drawn dreams.

The youngest participant that day drew diverse aspects of the future she was imagining for herself. “I see the peace and the love,” responded one participant. “You want to bring those qualities into your practice. It feels scattered now, but coming together. Hold on to that peace and love.” 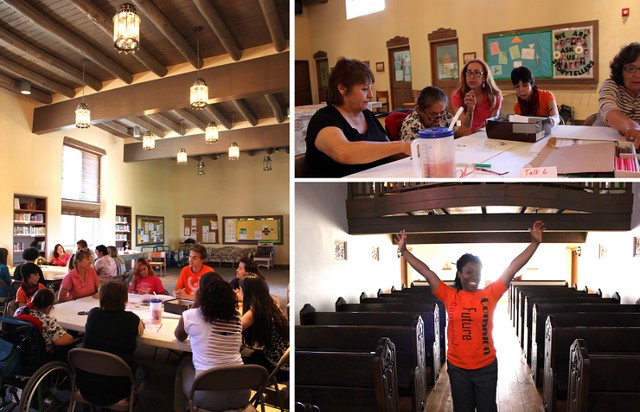 We had one of our largest groups in the beautiful St. James Church. The diverse participants were part of a long-standing community, tight-knit with overlapping pasts and dreams.

One participant began talking about her future dreams of more time to be in nature and to travel to historic places she’s seen on TV, but as she spoke more about the town she lives in, the hometown of several people at the table, she identified the abandoned St. Anthony’s Church as a prime place for her dream of “building a nursing home in my home town.”

Another participant had a dream of volunteering more with seniors. Yet another participant, Darla, said she dreamed of opening a Flower Shop and Bakery up the street from the church. These individual dreams coalesced to a communal vision of hometown betterment.

Our eldest participant dreamed of returning to her hometown. She drew on her own, but couldn’t speak, so her caretaker filled us in: “She is an artist, and will give people there competition.”

My aunt from Texas had suggested that I contact her old high school friend, now a pastor in Albuquerque. I spoke with Pastor Dan the next day, and he invited us that evening to dinner, to host Affirmative Art with the youth ministry, and to even stay the night. We were lucky since the youth group happened to be meeting on just that day. The Sandia Baptist Church welcomed us with open arms.

The seamless process of organizing this workshop illustrated an almost continuous feeling we all had along our cross-country journey: things came together and happened just as they should when we set aside rigid expectations and opened up to genuine wonder.

Ranging from pre-teen to teenagers, the friends joked a lot, but gave each other clear space to be heard. They had diverse dreams. One pre-teen wanted to become a DJ, and another hoped to be a pharmacist. Another dreamed of acceptance from others, “for everyone to be ok with who I am.”

We were excited to hold our final Tour Stop along the Los Angeles River. Many Angelenos have big dreams for their city’s river, which is currently encased in concrete. We didn’t plan on a workshop in LA, but instead hoped to add the finishing touches on the Dream Machine, the van we outfitted and painted for our cross-country Affirmative Art tour. Many people had painted their dreams on the outside of the van.

Wall of Dreams at the Spoke Bicycle Cafe on the LA River.

In LA, we parked the Dream Machine outside Spoke Bicycle Café’s courtyard to display the many dreams collected across 21 American cities. As friends, family, and strangers came to see dreams from the East Coast to the West, they too wanted to draw, so we offered them paint and paintbrushes.

Talking, sharing, and painting at the final Tour event in LA.

Along our journey, inspiring community leaders gathered friends, colleagues, and anyone interested to join our workshops in art centers, community gardens, shelters, cafés, churches, and sidewalks. We were always grateful for the people who came and the honesty of the conversations, which were especially meaningful when longtime friends learned new things about each other. I felt great joy seeing old friends in a new light through the cherished dreams they drew. New friends also came and wanted to draw.

When we were in Los Angeles, our last stop, our hosts from Taos, New Mexico, who were coincidently in town, came to draw again. They drew a dream for a “self-sustainable house,” and finally a dream to travel the perimeter of the United States, to trace the edges of the country, and “meet people along the way.”