Posted May 12th 2017 at 9:27 am by Lawrence Barriner II
in Alternative Futures

Alternative Futures: Benders of the Arc

As Julian bent down to pick up his briefcase, he noticed the all too familiar feeling of his Sense going off. The three-day board meeting had been long and he was finally ready to go home. Unless he could make quick work of the initiation he’d just been signaled to do, home had just gotten a lot farther off.

He looked up and saw the new administrative assistant for the board walking towards him. He’d never seen him before, but he was still feeling the déjà vu so this had to be the initiate.

“Hi! I’m Matias, it’s so nice to finally meet you and the rest of the board in person!” the young man said cheerily with his hand thrust in front of him.

“Julian,” he responded, wearily extending his arm for a handshake.

“I saw on your NetMap profile that you know my friend Curtis! I love Curtis! He’s one of my favorite people in the world! He trained me a few years ago in reading networks and network mapping. It totally changed my life!”

NetworkMapper, or NetMap, was the social media platform that had finally splintered the Facebook empire. It used DNA and other social media profiles to create a visualization of everyone a user is connected to.

Julian had just signed up over the weekend and he was surprised that someone he didn’t know had already seen his profile. The previous generation of Benders (his generation) had to be trained for years in order to Sense effectively. Because of NetMap, the younger generation could do it with some keyboard strokes and a few mouse clicks. Julian wondered if that would replace genuine, internally developed Sensing, but he didn’t have time to muse now…

He snapped out of his internal monologue as he noticed two of the other board members side-eyeing his conversation with Matias. Were they Unbenders? Either way, it was time to move.

“Yes, Curtis is quite the person. Say, Matias, will you walk me down? I have a plane to catch, but need to ask you a question as well.”

“Of course! It would be an honor!” Matias practically oozed with excitement. It made Julian sad (almost) for what he was about to do. 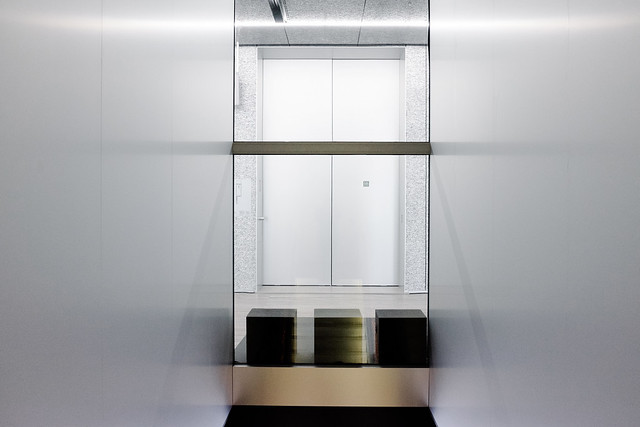 Julian led Matias out of the conference room’s large oak double doors and down the hallway to the elevator. Thankfully, all the other board members were either already downstairs or still in the boardroom.

The kid was going on and on about Curtis’ work until Julian raised his hand and cut him off.

The elevator door closed and began to descend as Julian asked, “How old are you Matias?”

Julian dropped his briefcase and pressed his right thumb precisely in the middle of Matias’ forehead. He simultaneously pointed his left index finger at the elevator camera and its protective screen fogged us. Matias stopped talking mid-sentence.

Julian whispered intensely, “Do you know what you are?”

“Kid, you’ve got a lot to learn and only a little time to do it so listen closely. Lesson one: learn to stay quiet in public. Got it? Good. Lesson two: get caught up on the Canon. Fast.”

The elevator was halfway down the 80 floors and there were only a few seconds left before the door opened. Julian rattled off the titles of five books and asked Matias which of the books he’d read.

“I’ve only read three of those, s…s…sir. But it was a w…wh…wh… while ago… Wh…wh…when I was younger.” Julian removed his thumb, reached down into his bag, and grabbed a slim book.

“Good. It’s pretty common for young Benders to be drawn to parts of the Canon without external guidance, but you need to read all five books in order to begin your training.”

“Just read the book. Before you finish it, you’ll find your way to the fifth book… well, technically, it’ll find its way to you, but now I’m getting into semantics. Just get in touch when you’re done with both. You have my contact info. Don’t use email.”

Julian picked up his briefcase as the doors parted and he started to walk off the elevator.

“Oh, and lesson three: learn to control your damn stutter. Stuttering will not serve you well under pressure in the future, got it?” Matias nodded vigorously.

As Julian walked away, Matias, still on the elevator, shouted after him, “Hey! Do you know Alexandre Royce?”

Julian kept walking but turned his head and spoke over his shoulder, “I don’t yet, but now that you Mention her, I’m sure I will soon enough.”

Matias started to say something else, but he was stuttering and the elevator doors slid shut in the middle of his sentence. “S… ss…she wanted me t…t…t…o let you know…“ and that was the last the two would see of each other for many months. Julian had done his job, though, and at this point, that was all he could do. Whatever the message was, it would have to wait.

He walked out onto Beaver Street and tapped on his watch to find the nearest coffee shop. He felt himself slipping out of déjà vu. Given how long he had stayed in, he knew he was going to need coffee. No matter how much he trained, following and staying in déjà vu was always mentally and physically exhausting. He made his way towards the Fulton street train station to take the A/C train to JFK airport.

The plane ride home was a long one and he wanted to make sure he had enough energy to get work done on the flight. And he hated that god-awful garbage they had on airlines these days. He stepped into the shop he’d looked up and bought a cup for a large coffee. As he pumped his coffee from the tall, black container on the counter, a nearby conversation grabbed his attention. The two, dramatic New York accents were thick but Julian overheard all he needed to: “… really unlucky for him to get mixed up with Alexandre. She is not one to mess with.”

Two Mentions in less than 24 hours. Julian was fully aware that frequency of the Mentions was related to how quickly a connection would be made. He’d be meeting her within the week now, for sure. One more mention and he might even find her in a couple of days.

He walked outside and continued on towards the train station. He smirked as he looked down and realized he’d still be on time to catch his plane. He was getting to be quite good at starting initiations these days…

As the elevator started back up to the 80th floor, Matias regained his breath and looked down at the book: Moral Letters to Lucilius (Letters from a Stoic) by Seneca. It was on his reading list, but he hadn’t yet gotten around to it. Odd.

Back at the top floor, he walked absent-mindedly back to this desk, still staring down at the tattered book cover. His forehead was hot from Julian’s thumb. He sat down in his overpriced office chair and opened the frayed copy of the book.

Inside on the left cover was a note scribbled in blue ink. The ink was faded and several spots were blurred because of what looked like water droplets (tears maybe?) but he read what he could.

If you’re reading this, you are almost ~~~~~. Welcome. You are a Bender of ~~~. We are few but charged with a most important task. Over the course of human history, it is our work to continually bend the path of human progress. We are bound not by ~~~~, but by ~~~~~ and energy. Our spirits, scattered across physical space and time, are unable to be kept apart. We find each other, often ~~~~~ by accident. With training, our Sense becomes so strong that we can find each other through almost any circumstance and barrier. If you are reading this, it means an Elder ~~~~~~ intercepted you and has confirmed that you are ~~~~ training. Our texts, written by other Benders throughout ~~~~~, must be read before ~~~~ your trainer. The training will hone your ability to follow energy (your own and the energy of those around you), see patterns, ~~~~ stretch déjà vu, and make interventions to support the Bending. Do not let this ~~~~ its way into hands ~~~~ than yours.

Matias closed the book as he realized someone was staring directly at him. His boss, the Board Director, was standing on the other side of desk. With the most intense look he’d ever seen on her face she said, “Matias, what is that?”