Posted December 8th 2010 at 10:06 am by Daniel Hawkins
in The Thoughtful Coal Miner 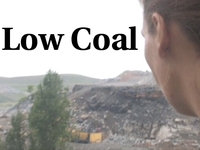 A couple of weeks ago I was given the opportunity to join a few great friends from various portions of the Appalachian coalfields to lobby in Washington, D.C. for the Appalachia Restoration Act.

While there we were given the chance to meet Jordan Freeman and screen a new film he and Mari-Lynn Evans had been working on entitled Low Coal. I was already familiar with their well known documentary film Coal Country that had aired many times on Planet Green’s Reel Impact and was eager to see their latest film.

My friends and I struck out from the hotel to locate the small townhouse within the chaotic maze of roads D.C. is known for. We wanted to arrive early to enjoy some fellowship with friends who were attending from the Appalachian Voices’ D.C. office as well as to meet new friends, and perhaps share some of our tales with a few who had never seen mountain top removal in person. I was also looking forward to meeting Jordan Freeman in person.

After a bit of socializing and a lengthy discussion with Jordan Freeman about underground mining we began the screening.

Low Coal provoked a range or emotions within me: rage, sadness, hope, fear. To say it “hit close to home” would be a gross understatement. The segments relating to the Upper Big Branch disaster and the portion in which a miner spoke from the shadows with an altered voice about “actual” safety in underground mines brought back memories of my life from only six month ago.

Just as the man said, as soon as a federal or state inspector was on the property the mine phones would light up with someone outside letting us know which section they were heading to we could get things right, things we weren’t given time to do before. Only when an inspector was on the way would a boss be willing to spare men from the well-oiled production machine in order to tighten up curtains and dust the ribs.

There was also a segment of the movie where a man who’d been injured was left hanging by the coal company. If you talk to anyone who has been hurt in the mines you’ll find them singing a much different tune about how “great” the company is. As one of my older co-workers put it, “All these fellars runnin’ around here sucking up to the company and bleeding them company colors will figure out what color they’ll bleed if they get hurt. I betchya it won’t be the company colors, I betchya it’ll be red.”

Many times during the documentary I became choked up and was glad the darkness of the room covered the tears on my face. To be in such a foreign place, in a stranger’s townhouse in Washington D.C., I felt as if I was in the mountains for an hour and twenty minutes.

Daniel Hawkins is a former coal miner from Virginia. Having finally gotten fed up with current labor practices and environmental destruction within today’s Appalachian coal mines, he has left the mines in search of a better future for his family. In this series, he looks into Appalachia’s past and possibilities for the future. You can find his full series on his own blog, http://thoughtfulcoalminer.blogspot.com/. This post originally appeared on Daniel’s blog on Tuesday, November 30, 2010.

2 responses to “An Appalachian (former) Coal Miner Goes to Washington”