An Exploration of Daily Life in a Refugee Camp 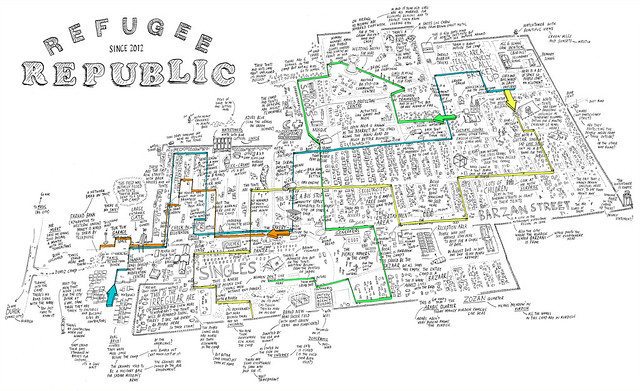 Refugee camps are often thought of as temporary and their residents as passive. But the reality is that people can spend decades in these settlements. As a result, many refugees living in camps are very innovative and concerned with building a life for themselves.

In 2015, artist Jan Rothuizen, multimedia journalist Martijn van Tol and photographer Dirk-Jan Visser keenly aware of the power of media to shape an understanding of refugee camps and their residents, produced the interactive transmedia documentary Refugee Republic. Their goal was to tell the story of everyday life in one refugee camp: Camp Domiz in northern Iraq.

“Mainstream media,” said van Tol, “is always communicating the same type of images: kids behind barbed wire looking into the lens of the photographer, from the bottom up; women sitting in front of tents waiting for help and the UNHCR truck to arrive; people waiting for food; people who are largely passive waiting for us to help them.”

In his direct experience with refugees, van Tol had seen a completely different reality. As a university lecturer in international relations at the University of Amsterdam, he was asked to teach in conflict zones. He taught students in Kosovo, Lebanon, and on the border between Syria and Turkey.

“There was a discrepancy between refugees as presented to me by the media– passive, waiting and very dependent– and the people that I met in real life who were very innovative, busy with the future, creative, entrepreneurial, and full of life,” van Tol said.

In the Q&A below, van Tol reflects on the process of making Refugee Republic, the stories he and his team heard, and the questions he was left with.

Nse Umoh Esema: First off, why did you choose Camp Domiz?

Martijn van Tol: There are a couple of camps in Iraq. Camp Domiz is in the north and has existed almost 3 years. It is a relatively young camp. But the Iraqi government has made a lot of investments for things like sewage infrastructure, so this is a refugee camp that may turn into a more permanent city.

NUE: What was your process once you got to the camp?

MvT: We just wanted to wander around the camp for 10 days and see what was happening. What kinds of people are in the streets? Who is not in the streets? How do people move about? Do they have jobs? How do they live? Do they work on their houses? Do they expand their houses? Do people who are in love date? How do they meet? Are there restaurants and bars? We just wanted to see with fresh eyes what is going on in the refugee camp.

After gathering all of this information, we looked at it without our usual journalistic frame where we focus on what is special, incredible, or very sad. Every night we would talk about what we saw, the people that we met and interviewed and gradually themes would emerge as patterns through all the stories. 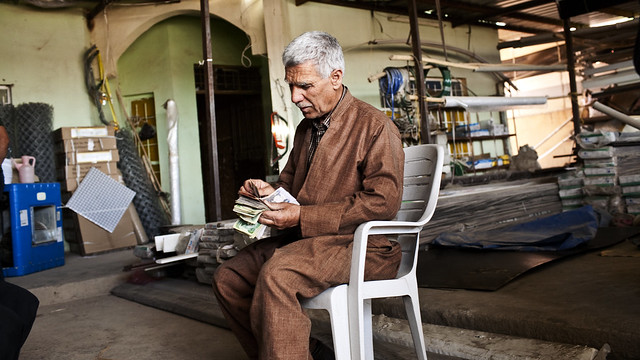 Firas started selling building materials in Camp Domiz and was forced to move right outside of the camp after his business blossomed.

NUE: What are some of the stories you heard?

MvT: One thing we noticed is that a lot of money is made inside and outside the camp. For example, one refugee started a bakery and was so successful that the United Nations High Commissioner for Refugees (UNHCR) started to buy bread from him.

There was a money transfer business, people were starting taxi businesses, and money was even being made in the camp and sent to family abroad. This is something we wouldn’t expect from refugee camps; Camp Domiz actually generated capital.

People were constantly busy with improving their houses. When they arrived at the camp, they would get a UNHCR box with a tent and some cutlery and some plates, a cooking stove and blankets. They would put a tent up and start living there. And they would use wooden sticks and tarp to create little pieces for expanding their house.

If you’d forget that this was a refugee camp you’d start to see a city being born. One refugee made a lot of money by opening a construction store where people could buy all sorts of material. According to this man, when war in Syria became more intense in 2012 and more refugees came to the camp and UNHCR didn’t have tents they all came to him to buy tarp and wooden sticks. In his words, UNHCR didn’t like that, so they threw him out of the camp. He re-started his business outside of the camp. 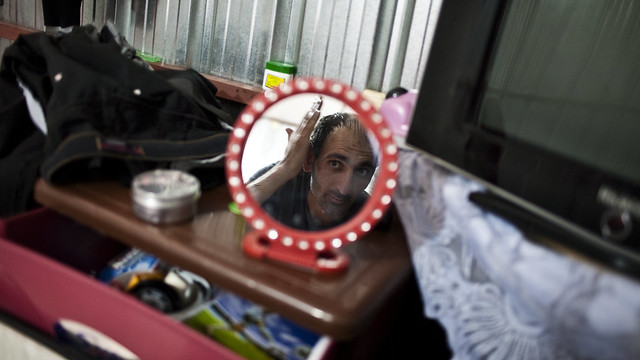 Ahmet, who is on vacation from the Netherlands visiting his family in Camp Domiz

When we were shooting some video on a street corner, a person, Ahmet approached us speaking Dutch. He said, “hey guys, are you all from the Netherlands?” He spoke in a regional dialect that we know in the Netherlands so we were a bit surprised. I asked him, “What are you doing here?” and he said he was on holiday. He was on holiday in a refugee camp visiting his family. That blew my mind. A refugee camp is a place people go on holiday to visit family.

NUE: What are some of the questions raised by the stories you heard?

MvT: I am a political scientist and what I thought was so interesting is that the refugee camp is constructed in relation to crises and emergency situations, but the reality is that people will live their lives there, probably for 10-20 years.

What kind of society are we talking about if this is no longer a place which people will leave after a couple of years or months? Should we look at refugees as citizens, and aid organizations and local authorities as the governments? How does that work? Do the citizens of the camps have rights or obligations? Are they represented in a way or are they living under a humanitarian dictatorship? What kind of political structure is there, if any?

NUE: What impact do you hope Refugee Republic might have?

MvT: When people look at refugees from Chad, Burma, Congo, or Syria, we often feel empathy. We think oh my, we should help these people. But there are so many refugees that need our help. The human crises becomes interchangeable. One week it is Burma, the next it is an earthquake in Iran, then war in Syria. We see all the images of people needing our help, what I think is happening in that process, in the ultra burdening of our empathy, is that we begin to look at refugees in a top down way.

Enforced by the NGO communication model, of the little boy looking up into the camera, we start to look down on refugees as people who are passive and need our help. They are so many of them and we Westerners should choose who we will help this week. This is a very unequal relationship.

What I hope we will reach with a focus on daily life and portraying refugees as people— who think about how they want to live, how their love life is like, how their children are doing in school, if they can find a good nanny for their children when they are working— is to humanize them and bring them much closer to us in our imagination. 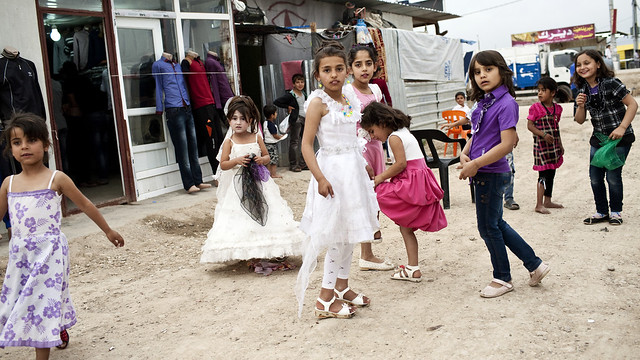 Children hanging out in preparation for a wedding

Maybe that guy who started his own garage and deserted from the Syrian army because he didn’t want to shoot at demonstrators will have us thinking, what would I do if I ended up in a refugee camp? Would I also be successful? What would I do to generate more revenue than the food coupons? What would I do to improve my housing situation?

Readers in New York can see Refugee Republic at the Musuem of Modern Art’s Insecurities: Tracing Displacement and Shelter exhibit through January 2017.