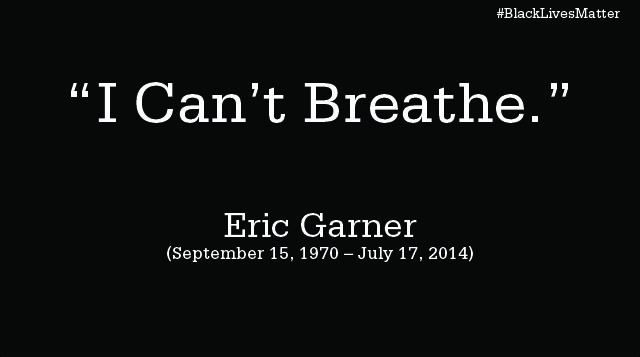 Defenders of the police chokehold used in Staten Island to strangle Eric Garner are still using “the broken windows theory” as justification for harassing Black and Latino low-level “offenders.” We should be clear on what this theory is and where it comes from.

The broken windows theory came as conservatives’ response to the civil rights movement demand for full employment in the mid-1960s. Martin L. King and other advocates said that unemployment was the cause of disorder in poor communities. They pointed to historic racial discrimination and injustice in work, education and training, business ownership, and public policy. They also said that Native Americans, poor Whites, Latinos, and Asians, were also victims of oppressive policies. The conservatives said it was the people themselves, and not the system, that caused slums, most crimes, and disorder.

The original proponent of the “broken windows” theory that led to policies such as “Stop and Frisk” and other “order policing” tactics was University of Chicago social scientist Edward Banfield. Banfield was followed by his more famous student and later colleague, James Q. Wilson. Banfield believed that class position (poverty, for example) was determined by the social disposition of individuals and groups themselves, “no one knows how to change the culture of any part of the population—the lower class or the upper, Whites or Negroes, pupils or teachers, policemen or criminals.” (14, Harcourt) Banfield favored repealing the minimum wage, reducing the school leaving age, intensive birth control guidance of the ‘incompetent poor,’ and “Stop and Frisk” policing, to alter the incentive structure for people culturally predisposed to violate acceptable social norms. Black men, he argued, had been culturally disfigured by the absence of traditional family life during slavery. He characterized Black men as “wondering,” without strong attachments to family or mainstream social norms.

James Q. Wilson thought similarly, arguing that, “Wicked people exist….Nothing avails except to set them apart from innocent people.” (14, Harcourt) How does one know a “wicked” person? Wilson wrote in 1968 that: “A teenager hanging out on a street corner late at night, especially one dressed in an eccentric manner, a Negro wearing a ‘conk rag’ (a piece of cloth tied around the head to hold flat hair being ‘processed’—that is straightened), girls in short skirts and boys in long hair parked in a flashy car talking loudly to friends on the curb, or interracial couples—all of these are seen by many police officers as persons displaying unconventional and improper behavior.” (16, Harcourt from Wilson, 1968).

Wilson later co-authored a short 9-page article in Atlantic Monthly in 1982 entitled, “Broken Windows,” in which he and co-author George Kelling maintained that there was a link between controlling minor disorders (such as littering, loitering, public drinking, etc.) to producing an environment likely to attract criminals and more serious crime. In the article, Wilson and Kelling also nodded approvingly to reports that police, “Kick Ass.” “None of this is easily reconciled with any conception of due process or fair treatment,” they wrote, but it was needed just the same. They ask, “How do we ensure that age or skin color or national origin or harmless mannerisms will not also become the basis for distinguishing the undesirable from the desirable?. . . .We can offer no wholly satisfactory answer….” [Harcourt, 139] NYPD Police Commissioner Bratton said in 1998, that Wilson and Kelling’s article, “articulated and put into beautiful words what I had found from experience.” [Harcourt, 48]

In line with its racially charged origins—“Stop and Frisk” does not target White “white collar” criminals that sell and pass off predatory toxic mortgages to unsuspecting homeowners and investors, or detain Soccer Moms illegally paying domestics sub-minimum wages off the books—and repeated studies show that “Stop and Frisk” policies have NOT proven effective in reducing crime. Moreover, there are also other community policing strategies that do not involve “order-maintenance” policing, practiced in cities such as San Diego–that experienced even more dramatic reductions in crime than New York during the height of “Stop and Frisk.” [Harcourt, 92]

Order policing advocates do not consider that black criminals may not be “deviants” at all, but that they have alternatively absorbed some of the prominent—and let me say real– values of the society they inhabit: with regular violations of civility by police who “kick ass” and often confine innocent Blacks (such as the recent video-taped lynchings in Staten Island and Ferguson); with its centuries of naked economic exploitation of Blacks and others, right up to current attacks on public sector unions (the last bastion of income stability in many Black communities); with its ruthless inter-personal competitiveness and hedonism; with its hands-off treatment of wealthy elite criminals who brought the world economy to a standstill in 2008; with its systematic denial of these facts and blame heaped upon its victims.

It may be that Black criminals, and others, are cynical realists who have simply lost faith in Black solidarity, or in Rev. Martin L. King’s “beloved community,” much less in the American Dream, and pursued the same path as other exploiters of the Black community—who do quite well by it. The solution to this kind of thinking among criminals, who in my experience are often highly perceptive social critics, is certainly not “order policing.” The solution may be to instill confidence among young skeptics that government will take on the real problems: unemployment, unprecedented income inequality, mass incarceration, demeaning police harassment and disrespect from public agencies, failing schools, and homelessness.

Over Policing as a Response to Demands for Economic Justice

The conservative arguments of Banfield, Wilson, Patrick Moynihan, and others, led Black activist Stokely Carmichael and theorist Charles Hamilton to coin the term “institutional racism.” They said the new fight against racism would be against the hidden barriers to equality that were embedded in seemingly neutral, but in fact highly discriminatory policies in the school system, police practices, employment practices, etc.. The response of the Black Congressional Caucus in the early 1970s, who rejected Banfield’s and Wilson’s arguments completely, was to make full employment their main demand.

Decent Democrats like Hubert Humphrey joined the CBC in this, pushing for a full employment bill with a federal guaranteed job for every citizen. This bill split the Democratic Party. The AFL-CIO opposed the full employment bill, and so did “moderate” Democrats and Republicans. “Neo-liberalism,” meaning more power to the private sector and less to government, was their response to demands for economic justice—this did not work to produce jobs in inner cities, it did lead to unprecedented wealth disparities. New York Mayor Giuliani, a true conservative, brought broken windows back to life in the early 1990s—focusing initially on “Squeegy men” and street peddlers. He said social conditions and policies don’t cause crime, “criminals cause crime.”

Why go into this history? Because the furor over policing is and always has been a struggle over what to do with millions of Black people who after the civil rights movement demanded economic justice, and refused to work again under conditions of semi-slavery–even if this meant drug dealing or selling illegal cigarettes. One answer was that government should make fair and full employment the keystone of policy; the other answer was to repress them. From exactly such an analysis, the Black historian Manning Marable predicted in the late 1970s, before “the War on Drugs,” that government would incarcerate unemployed black youth in mass as a social control strategy. That’s exactly what happened.

Broken Windows is a repressive response to the historic demand for economic justice claimed by black people. It’s obvious who gets harassed and who doesn’t. The unwillingness of the NYPD and political officials to come clean on this makes real conversation impossible. It becomes pure b–s–; and a leading cause for real disorder to come.