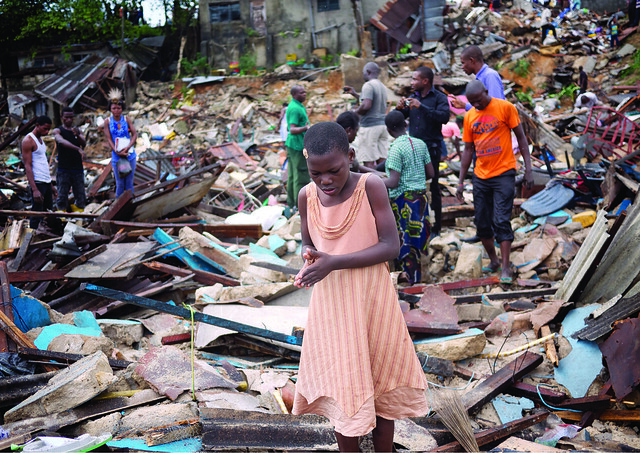 On a gloomy morning in late August of 2009, a swamp buggy bulldozer careened through the tight layout of Njemanze, a waterfront community in Nigeria’s third largest metropolis, Port Harcourt. Propelling through the neighborhood, the bulldozer violently pulled down residences, stores and community spaces. These belonged to and were inhabited by residents who had not been adequately compensated. Wood and cement, zinc roofs and gates came tumbling down. By the end of the demolition process, thousands of people were left homeless, their sources of livelihood destroyed. Sanctioned and led by the Rivers State Government, where Port Harcourt is located, the state’s emissaries are described in newspaper clippings as having beamed in satisfaction.

This demolition and those that have followed in other waterfront communities in Port Harcourt are driven by the State’s vision for the city as articulated by the 2008 Greater Port Harcourt: New City Master Plan. In this official imagination, Port Harcourt will be reinstated to its colonial antecedent, a British inspired, “Garden City.” Port Harcourt will be a “world class city,” that is “internationally recognized,” and the “preferred destination for investors and tourists.” These aspirations are laid out in flowy text and in diagrams and renderings that could be culled from any city in the West. Together they constitute, as African urban planning scholar Vanessa Watson has coined, “an urban fantasy.” 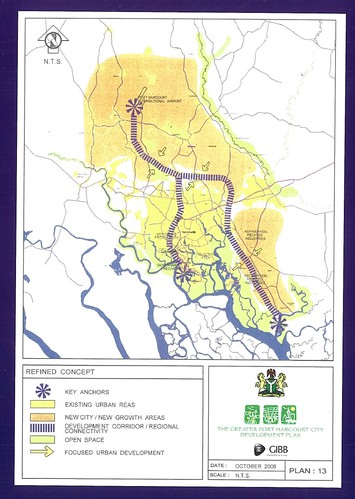 These fantasies leave no room for Port Harcourt’s marginalized residents who live in the waterfront. In fact, in the Master Plan’s maps, waterfront areas are labeled as open space.

The development model that the Rivers State Government (RSG) seeks to enact in Port Harcourt ignores these realities around informality. Instead, the RSG treats informality like a peripheral condition defined by scoundrels living on the edge of town as opposed to the ubiquitous reality that it is. Certainly, different development models, which shun this urban dystopia and are grounded in the city’s reality, are possible. One notable place to look for this is an almost 6-year old intervention: the Human City Project (HCP). The Human City project is helping to imagine and prototype through stories and physical interventions, different development models for the city. 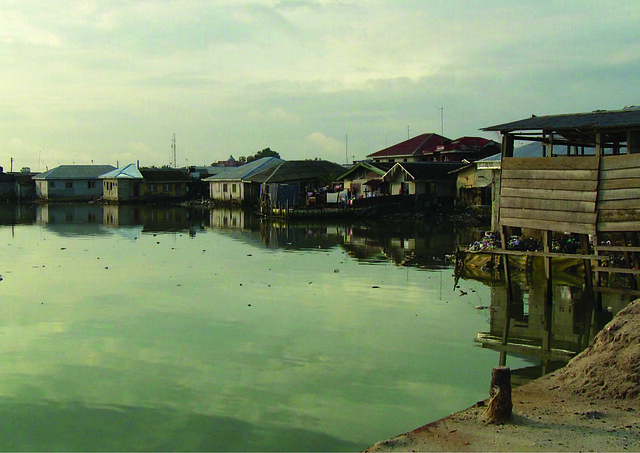 Because stereotypes can make one story become the only story, storytelling is a profoundly political and powerful act. With this assertion as a core departure point, the Human City Project (HCP) aims to change the way Port Harcourt, and especially the waterfronts, are planned, built and imagined through centering a different set of stories than those told in the mainstream.

The project focuses on sharing narratives about the city and the waterfront from the perspective of waterfront residents. Through centering the expertise and experiences of waterfront residents, the Human City Project produces various representations of the city: audio stories, short films, legal cases, maps, and community action plans. Listen, for example to this short audio story produced by a resident participating in the project. It is a conversation between an architect, an engineer and community residents. They are discussing the design of a new market. Much to the chagrin of the traditional experts, a market woman asserts that she too brings a unique perspective and expertise to the market design process.

How the Human City Project Began

The Human City Project’s explicit entry point into the planning and development of the waterfront via stories is strategic but not surprising. Michael Uwemedimo, one of the early founders of the Collaborative Media Advocacy Platform (CMAP), which houses the HCP, is a filmmaker. Of Nigerian and British heritage, Uwemedimo spent many of his formative years in Calabar, a city just four hours east of Port Harcourt. He was initially commissioned by Amnesty International to produce a short film for their Demand Dignity Campaign on forced evictions in waterfront communities. One day, in the middle of a demolition, he went out to shoot footage with a community resident.

“During the demolition, the lines are very clear. You have one side with soldiers, police and bulldozers, and community on the other [side]. Most journalists are on the police side,” he recalls. Standing with the community and allowing his camera to be a tool for residents to tell their stories, Uwemedimo ended up getting arrested. His detention quickly signaled to those who doubted his intentions, which side he was on and laid the initial groundwork for trust. Residents, “pretty immediately saw my camera as an instrument that they could use to articulate their interests,” he reflects. It is out of this trust that The Human City Project was born.

The Components of the Human City Project

There are three interrelated components to the Human City Project: communications and campaigning, human rights action and research, and planning and building.

Under the human rights action and research program, the project trains community residents to provide paralegal support around human rights issues, pursues litigation, produces documentary films and conducts participatory action research on the long-term impacts of forced evictions. Activities under this program are united by the goal of changing how the waterfront and its residents are viewed in policy and law.

Uwemedimo asserts that something powerful begun to happen “once [community members] saw the documentary films and recognized themselves.” This process “opened up a new sense of possibility for lots of people.” For example, one particular documentary features the case of unarmed protestors from Bundu Ama, a waterfront community, who were shot and injured by the Nigerian Security Forces in late 2009. The film became a part of Amnesty’s International campaign against forced evictions and was integrated into a legal case brought before the regional Economic Community of West African States (ECOWAS) Court. 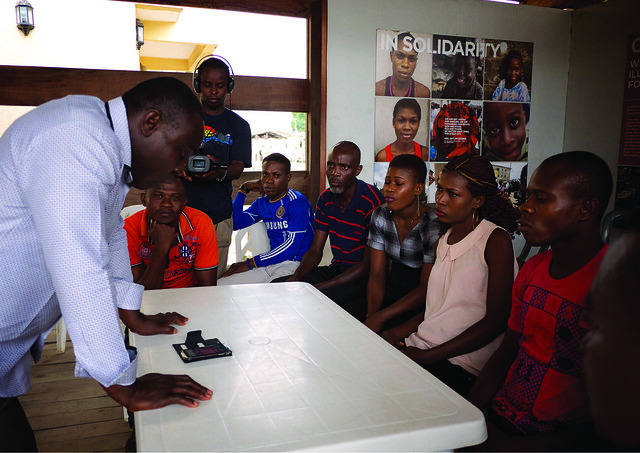 Securing an ECOWAS victory in 2014 was an incredible feat for the plaintiffs and for the HCP. But, arguably, it was not the most important outcome of the process. According to Uwemedimo, along the way, “something everyone said was that they lack voice… what people focused on was [the need for] spaces where they could come together and spaces where they could speak out, where they could project.” Uwemedimo and the rest of the CMAP team took that sentiment literally and with interested community members began to build a platform for community voice in the form of a community radio project, Chicoco Radio. 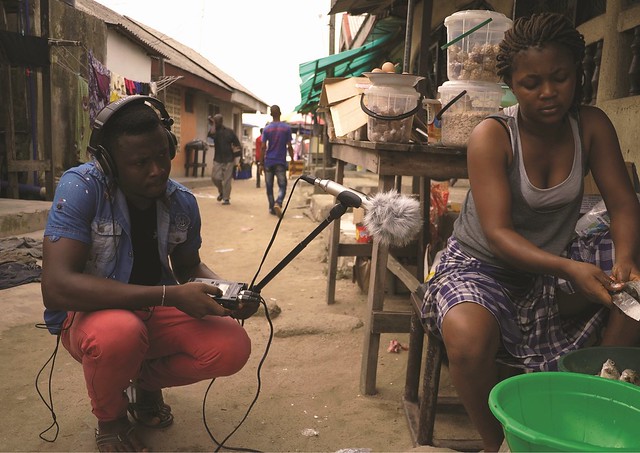 Now, a community-owned radio station, already offering production and storytelling training for an initial cohort of about 40 youth, is one of three components of HCP’s Communications and Campaigning program. The other two components are, a mobile and inflatable cinema used for community film screenings drawing hundreds of waterfront residents; and lobbying activities, such as visits from European ambassadors, directed at putting pressure on the Rivers State Government.

Below is another one of the audio stories produced by Chicoco Radio trainees. It is focused on challenging stereotypes around who waterfront residents are:

The Communications and Campaigning program aims to strengthen voice and visibility. At the beginning, these goals translated to the HCP taking an oppositional approach to development. But over time, Uwemedimo says, the project has “moved from opposition to proposition.” Or, in other words, “from just saying no to illegal demolitions to saying yes to participatory development.” One of the areas where this move towards proposition has been clearest is in the HCP’s planning and building program. 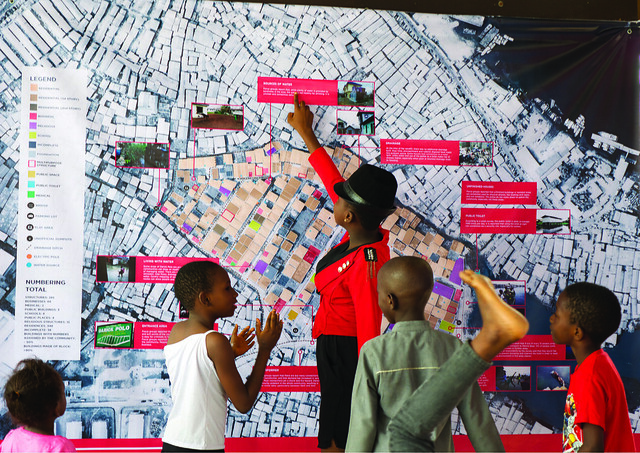 As part of this program, waterfront residents and HCP collaborators are focused on: constructing a physical media center to house the community radio station; incubating pilot projects that improve the physical environment and serve as catalyst for small scale high impact projects; implementing a participatory community mapping process; and developing community action plans.

In each of these components, The Human City Project’s emphasis is on using, Uwemedimo explains, “a deeply responsive and collaborative process.” For example, the final concept for the media center is a hybrid structure that is grounded in part on land and floats on the sea. This amphibious design came out of stories and design charettes where waterfront residents articulated their sense of historical attraction to the river and the ways that forced evictions threaten that connection. Relatedly, a governance board is currently being constituted to ensure that once fully built the media center is owned and controlled by waterfront communities and not outside stakeholders. 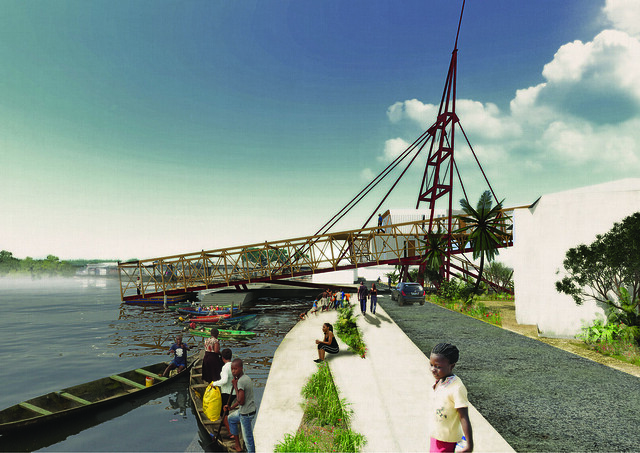 A rendering of Chicoco Radio Station

Michael summarizes the HCP as “driven by collaborative media, media advocacy and collaborative design.” The deliberate bringing together of planning and storytelling is a reminder of how much the two have in common. As a filmmaker, Michael is very aware of this. He argues that, “the relationships between researching to develop a narrative focused on the process of editing and framing, is transferable in a direct way to [the task] of shaping space.”

Said another way, there are parallels in the process of developing a story or a community plan, and parallels in the final artifact or outcome that is produced. As urban planning scholar Leonie Sandercock argues, planning and storytelling can both be creative acts that open up imaginative spaces. And, when they serve as successful catalysts for change, it is because they have stirred up an imagination of new alternatives. This speaks squarely to what Uwemedimo argues is the core ambition of the HCP, to show “that a different development model is possible.”