Posted November 17th 2014 at 11:48 am by Callahan Seltzer
in Faith and Planning, Racial Justice & Urban Planning: Reflections on Facing Race 2014

When was the last time you took notice of the number of churches and places of worship in your neighborhood? I suspect I walk by five churches a day, but I can scarcely name a single congregation or tell you who worships there. They are not my churches but they are my neighbors. 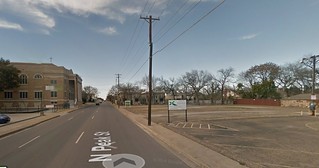 My parent’s house (where I grew up) in East Dallas stands near a quadrant of large, vacant lots—four large parking lots for the historic East Dallas Christian Church (EDCC). It’s a commuter church: a community of predominantly white worshipers that drive in just for Sunday services. On Sundays, this empty space becomes a place. All other days of the week, the lots are a hub for prostitution, drug trafficking, and violence against women. There have been murders and beatings in these lots. Adding lighting, or cameras or surveillance was not the answer. When the police have increased their presence, the activity has just migrated to other areas of the neighborhood.

At the Facing Race 2014 Conference, I happened to sit next to one of the congregants of the Church at breakfast one day. We talked about the ups and downs of the neighborhood over the years from our insider and outsider perspectives. Midway through our conversation, he asked a pointed question: “In your opinion, has the church been a good neighbor over the years?” His words filled me with possibility and regret: why couldn’t we have started this dialogue years earlier? Could we have prevented any of the violence and struggle if we had formed an alliance around our shared fate?

When we ignore religious institutions, we ignore the power of their constituencies to our own detriment. We miss a promising opportunity to create long-term partnerships across racial and cultural lines, partnerships that are rooted in a shared perspective of human dignity. Churches in the south have historically been strong political forces, at the nexus of power and capital. If we believe in the power of communities to shape a new future for themselves, religious communities are a critical partner for us.

Talking about race and religion can be difficult—and the work may sometimes be messy—but spaces for reflection, like churches, can also be a safe space to begin these dialogues and action. In Texas and across the south, faith-rooted organizations and communities are enacting new yet realistic visions of faith as an emancipatory force. At Facing Race, we heard about The Freedom Center for Social Justice in North Carolina led by Bishop Toniya Rawls, a wonderful example of this. Or we can look to the work of Friends for Justice, a faith based nonprofit organizing narrative campaigns across southern states. We at DUSP must pay attention to and learn from this work if we truly want to build the alliances necessary to improve our neighborhoods and cities.