Posted November 8th 2016 at 7:29 am by Grant Williams
in Narratives of Self-determination

Fourtee Acres is a 195-acre family farm managed by Tyrone Williams in rural east North Carolina. Tyrone’s grandfather acquired the first tract of land in 1916 and became the first in his lineage of sharecroppers and enslaved farmers to own their own property. For the last 100 years, the farm has been a key source of wealth for the Williams family, producing cotton, tobacco, soybeans, peanuts, and timber. But, in 2012, Tyrone began asking himself some key questions about the future: “What kind of legacy do we want to leave here? Our family left us the sustenance, the land, and we want to leave a roadmap for our children and grandchildren.” 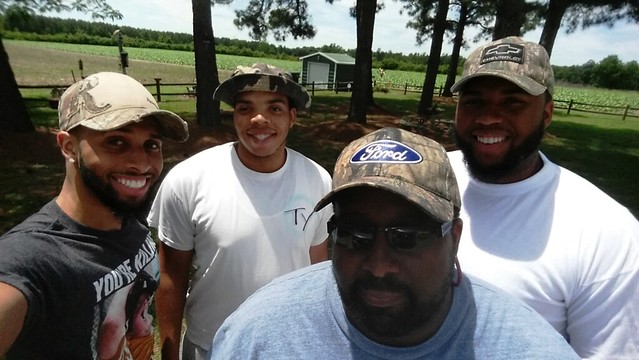 Tyrone is one of many families concerned for the future of family-owned small farms and land. In this impoverished region of the Black Belt, where agriculture and timber industries dominate the economy, preserving the 1 million acres of at-risk family land is a critical strategy for local economic development and local wealth. Land loss and out-migration has plagued ancestral land across the south, with African-American-owned land decreasing from 15 million acres to 2 million acres over the last 100 years. Tyrone considers himself as one of the lucky ones: “By the grace of God, we have been able to keep the land, and it dawned on us that, the long tenure of family land wasn’t looked at as a real income-generating entity.” 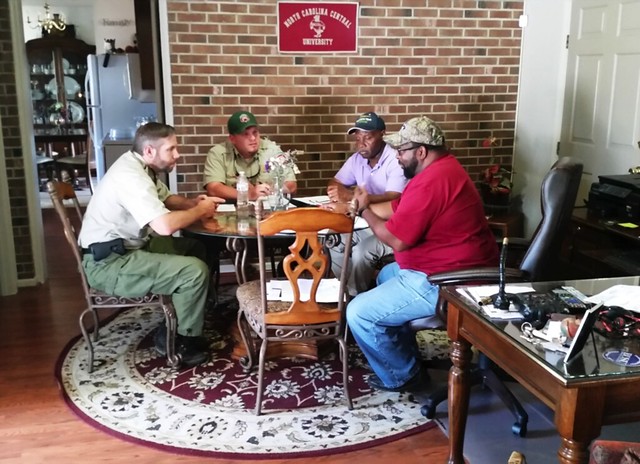 The Roanoke Electric Cooperative is playing a key role in land preservation through the Sustainable Forestry and African-American Land Retention Program. This program builds a support system for landowners and provides resources for landowners to develop strategies for sustained wealth. As director Alton Perry, describes, the program allows “those who own property to demonstrate to the next generation about the capacity that this land has – whether its income, social benefits, and environmental benefits.”

So far, 117 land-owners and 7,500 acres have benefited from the program and the resources it offers, including $200,000 in financial assistance for timber planning and management. Growing the Roanoke region’s locally-owned timber supply can have much deeper impacts on the region’s economy. “It really empowers everybody down the chain,” Alton Perry suggests, “from private contractors to foresters and timber company jobs to the mill yard. Even down to the local country stores where people are buying fuel and food. But it all starts from the land.”

After two years enrolled in the Sustainable Forestry Program, Tyrone is teaching his children to recognize those deeper forms of wealth, not just money, that the land can offer them and their community. “When I look at the crops, I’ve always thought where will that food end up?” Tyrone reflects, “now, when I see a table in a restaurant, I think, did my trees end up here? Being a contributor to that whole system. To me, that’s wealth.”

The Sustainable Forestry and African-American Land Retention Program is one of many initiatives that have emerged from the Roanoke Electric Cooperative in the past twenty years. Roanoke Electric’s CEO, Curtis Wynn, describes the cooperative’s approach as grassroots economic development. “We bring like-minded partners together that have similar interests and goals, to work as hard as they can to collaborate with each other.”

The electric cooperative has cemented the opportunity for collaboration through quarterly convenings of the Roanoke-Chowan Partners for Progress (RCPP2), open to all cooperative members, non-profits, businesses, and elected officials. “We are a feedback loop to inform and guide Roanoke Electric’s strategic agenda,” says RCPP2 Director, Reba Green-Holley. This group’s purpose, as Mr. Wynn describes, “is for folks to come together, explore the needs of our community, … and look at ways we can selectively have economic development activities around the means that we all realize are there.”

The largest effort to date is launching this fall to address the lack of internet access for 65% of the service area. For Mr. Wynn, the cooperative’s broadband infrastructure program is a landmark opportunity, since “most of the economy is basically dependent on having broadband service. It can open up doors for quality of life and [attract] potential industry in our area.” 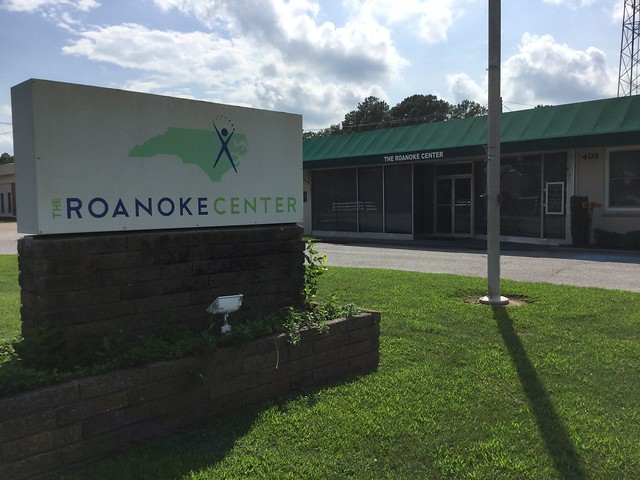 The Roanoke Center, a non-profit subsidiary to the Roanoke Electric Cooperative, hosts many of the cooperative’s community programs

It may seem strange to have an electric utility leading the charge for community development. But this role was actually one of the original mandates of electric cooperatives under the Rural Electrification Act. Electric cooperatives are one of the few institutions with designated access to millions of dollars through the USDA’s Rural Economic Development Land and Grant Program. In rural and impoverished areas, electric cooperatives often have the most resources and capacity of any local-based institution. Those resources are intended to be collectively-owned and managed by each and every household that receives electricity from the cooperative. Member-driven solutions is core to the Roanoke Electric Cooperative, where, as Mr. Wynn explains, “members must be at the center of every activity we do on a daily basis.”

Member driven solutions didn’t happen over night for Roanoke Electric. It started in the 1960’s, when Matthew Grant, a leader in the community, began organizing black cooperative members to become actively engaged in the cooperative. At that time, Roanoke Electric had an all-white board and nearly all- white staff despite serving a majority African-American area. The cooperative was run strictly as a technical operation; its goal was to provide electricity at the lowest cost possible. But Mr. Grant understood that, as an owner and member in the cooperative, he had a right to have a say in its operations. After years of educating and organizing the community, Mr. Grant became the first African-American elected to an electric cooperative board in 1969.

Under Mr. Grant’s leadership, Roanoke’s members became deeply engaged in the cooperative’s activities. Marshall Cherry, Roanoke Electric’s COO, recalls Mr. Grant as taking an active role in ensuring equality and fairness in the cooperative, but also in the business activities of the cooperative’s partners. “He would ask (the vendor) a question like, What percentage of your employee makeup is African- American?” Mr. Cherry recalls. Over the last fifty years, black representation on the Roanoke Electric board grew to a two-thirds majority, reflecting the demographics of the area. Employment diversity increased across all staff positions, and Roanoke Electric hired the first African-American electric cooperative CEO in 1997 – Curtis Wynn.

Mr. Wynn and his team has been building off of Mr. Grant’s deliberate leadership approach by deeply engaging and empowering cooperative members’ in all of its activities. At the heart of member empowerment are Roanoke’s Straight Talk Forums, town hall meetings held in each county to inform the members of their efforts and receive input. As Curtis Wynn explains, “most of the things we do are a direct result of input they’ve given us. Over a six month period, we’re out in the community having these meetings… we provide them with information, with a fellowship meal…and [get] feedback of their perception of what we do.” 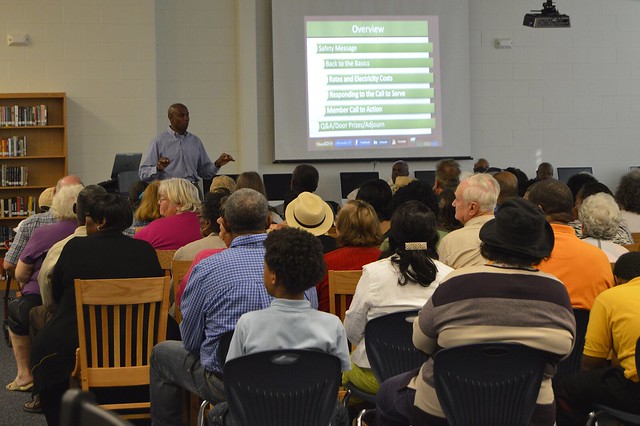 About 400 members attend the Straight Talk forums each year and their input has become a breeding ground for new ideas, now driving Roanoke Electric’s efforts. One of the key efforts developed through member concerns is Roanoke’s “Upgrade to Save” energy efficiency program. Through “Upgrade to Save,” cooperative members can access weatherization, HVAC upgrades, and efficiency education with no upfront cost and immediate savings. A key “pocketbook issue,” lowering members’ utility bill can be essential to community economic development. It creates new opportunities for local contractors, energy auditors, and producers of high-quality building materials. Additionally, when members save money on their bills, they can spend that money in their community and support local businesses.

Mr. Wynn believes that the democratic forums and the Roanoke-Chowan Partners for Progress put the power back into the people’s hands. “We can’t do it without them,” Mr. Wynn declares. “The questions being asked by the membership are pushing our own thinking. They are asking thought-provoking questions.“ The engagement of Roanoke Electric’s members and the responsive strategies of the leadership team has become “a catalyst to improve the quality of lives, homes, and place in the Roanoke Electric Cooperative service area,” says Sondra Dickens, Executive Director of the Roanoke Center – a non-profit subsidiary of Roanoke Electric.

Across the country, rural communities suffer from economic disinvestment and persistent-poverty. Few solutions are being offered by state agencies, national policies, or an increasingly urban-centric economy. But, Roanoke Electric is demonstrating that when empowered community members take over their local institutions, they can begin to turn a community’s dreams into reality. Watching these dreams come true has convinced Mr. Cherry that “the possibilities for this organization are endless. I am very optimistic about the legacy that we are building here at Roanoke.”