Cooperative California Cities and the “New Economy”: Learning From History, Starting from Success

The “New Economy” label is used by a rising generation seeking to promote economic democracy, and build an economy which achieves the three e’s of the famed “urban planner’s triangle”: environmental sustainability, social equity, and economic development. For those interested in actionable, place-based strategies towards this end, the San Francisco Bay Area is currently a hotbed of activity, featuring a rich ecosystem of worker cooperatives, employee-owned firms, support and advocacy organizations, and local government initiatives, making it an exciting case study for those in other city-regions. What can those seeking to grow a “New Economy” learn from the Bay Area? 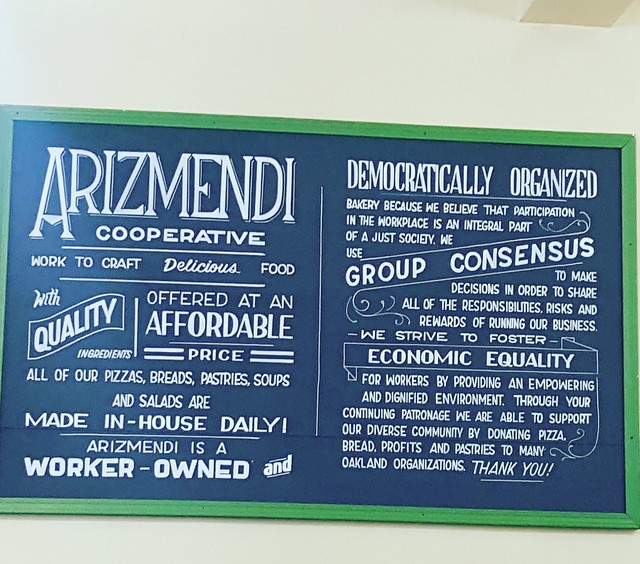 The Arizmendi Association of Cooperatives, started its first bakery over 20 years ago, and how has five locations in the Bay Area. All are worker owned.

It’s Really the “New to YOU Economy”: How History Matters

Many “New Economy” ideas aren’t new at all: cooperatives and worker ownership, linchpin strategies of this movement, have a long history. A critic might ask, is this really just the “New-to you-Economy”, a retread of ideas cyclically popular after major economic and political crises, ideas that simply seem new to the next generation?

In meeting with Bay Area cooperatives, the importance of history was clear. The Bay Area was famously a center of such activity in the 1960s and 1970s. In the wake of recessions and the Vietnam War, the region was a national center for alternative approaches to organizing the economy, with movements like the People’s Food System, which built a flourishing network of cooperative food organizations, part of a broader group of cooperatives and collectives. By the 1990s, most of these entities were gone, as the tech sector arose to dominate the local economic landscape. Though new businesses, coop or not, have a high failure rate, many whom I met with were acutely aware of the past, and mindful of learning from the prior wave of coops. One of the chief lessons they had taken from their history? Start from success.

Starting from Success: Models and Strategies

Converting to a cooperative to save a failing business, a common strategy 40 years ago, may be a bad idea. Why? Because changing to a coop may not eliminate the issues causing the business to fail to begin with. Similarly, starting a business with little chance of success, just to “escape capitalism”, also a common strategy of the past, may not work, either, especially if you go into a highly-competitive, struggling or rapidly changing industry. Instead, entrepreneurs interested in using the cooperative ownership structure today often seek to either start-up from scratch with a sound, well-researched business model, or convert a highly successfully business with retiring owners.

The Start-Up Approach. A great example of this model is the Arizmendi Bakeries, which employs well more than 150 worker-owners across five Bay Area bakery-cafes, and are networked through a central support cooperative that handles shared services. As one of the founders of Arizmendi relayed to me, they were very aware from the start, two decades ago, that coops had often used a haphazard business strategy, entering businesses that might not build on one another, or might not be very promising. So they started out by focusing on what were the high profit-margin, easily replicable aspects of a long-running, successful Berkeley coop, the Cheeseboard Collective, and focused on pizza and breads. One bakery became five, and today they are preparing to launch another new cooperative.

Another example in Oakland is that of Prospera, formerly known as WAGES, which works primarily with immigrant women seeking to build their own businesses, be they cooperative or not, providing them training and technical assistance. For others interested in starting new cooperatives and employee-owned firms, there is a host of support organizations with a local presence to work with them. These include well-established groups like the , and the US Federation of Worker Cooperatives. Newer entities include the Sustainable Economies Law Center (SELC), Uptima, and Workers Lab, all of which are housed in Oakland’s Impact Hub. 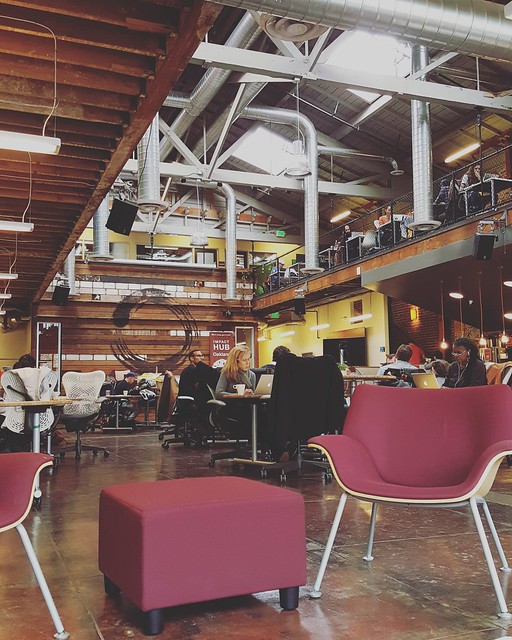 The Impact Hub in Downtown Oakland houses many social economy organizations, including a number of groups working to promote cooperative ownership in the Bay Area and the nation.

SELC has been working to educate local entrepreneurs on the full range of ownership models they can use, including coops, while also advocating to change state and city laws to make them friendlier to cooperatives. Just law year, SELC was part a coalition that helped change California’s cooperative statute to make it more flexible, and easier to raise external capital. Uptima Business Bootcamp, meanwhile, is a cooperatively-owned business accelerator that works to promote minority entrepreneurship and start-ups, be they coops or not. Unlike other start-ups and accelerators, Uptima is partially owned by the participants, who therefore maintain a relationship even after they’ve completed the training modules. Workers Lab is a non-profit seeking to disrupt low-wage work in the US by deploying a hybrid of cooperative, union, and other pro-worker strategies in the economy.

Converting from Success. Another strategy for starting from success involves converting an existing successful business to employee-owned. Of course, the question is: why would a successful business owner WANT to sell their business to their employees, if it’s so great? The answer? They’re getting old! A wave of Baby Boomer small business owners is facing retirement. If they have kids, the children may not want to go into “the family business”. How are those owners going to sell that business and retire? How can they leave a legacy, knowing the work goes on? They can sell to their workers. This is a strategy being promoted by a host of organizations either based in the Bay Area or which have a presence there, including the ICA Group, US Federation of Worker Cooperatives, the National Center for Employee Ownership, and Project Equity.

City governments, too, can play a role here, as Oakland and Berkeley are both currently exploring. They can help by working with local organizations to track the age of local small businesses, to conduct outreach campaigns about the option of conversion. They can also either directly provide technical assistance and educational resources to small businesses interested in this, or they can link businesses to support organizations, like those listed above, to help them make this conversion.

Whether or not this new wave of cooperatives in the Bay Area will survive longer-term remains to be seen. Regardless, they are strategically planning for a long and healthy future, by starting from success.

3 responses to “Cooperative California Cities and the “New Economy”: Learning From History, Starting from Success”