“Bolivia has the potential to be a prototype regionally and globally for a restructuring of economic and political systems. But it is still in the pot, in a sense, it is still being cooked.”

It is with this bold assertion that Eugene Toland, a Catholic priest who has been living and working in Bolivia since 1971, opened his presentation to a group of CoLab staff and students last week. We were intrigued.

To Toland, a major factor in Bolivia’s potential is the strong indigenous culture throughout the country. Despite the fact that Bolivia has been a system of apartheid for the indigenous majority for over 500 years, Toland insists that this history has not squelched the rich legacy of native resistance nor weakened indigenous cultural values. 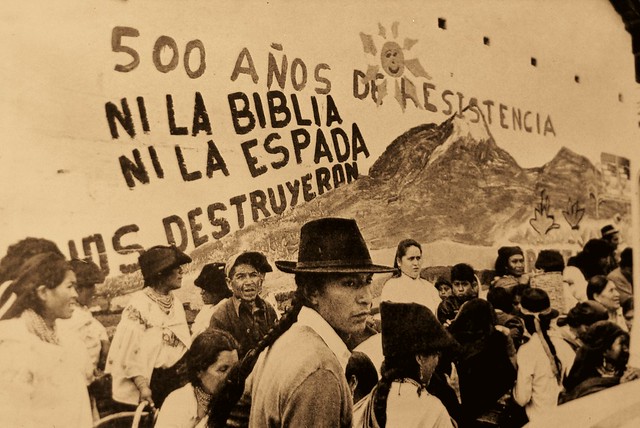 A picture of Bolivian Miners with the phrase, “500 years of resistance, neither the bible nor the sword has destroyed us.” Source: Flickr/Obi.

One example of resistance Toland shares is a rebellion led by Tupaq Katari and his wife Bartolina Sisa in the late 18th century. Bolivia’s elite, from the days of Spanish colonial rule to the present, have feared that they would be cut off from La Paz, the center of power. This fear, it turns out, traces back to Katari and Sisa’s rebellion. In 1781, Katari and Sisa leading indigenous communities against the Spanish Empire, laid siege to La Paz for half a year, wreaking havoc on the Empire’s emissaries.

While Katari and Sisa were eventually captured and the rebellion suppressed, Toland says those six months have been imprinted in the collective conscious of Bolivians. Before Katari was brutally quartered by the Spanish, each limb tied to a horse running in opposing directions, he declared, “I die but will return tomorrow as thousand thousands.” The fulfillment of this promise is but one source of continued inspiration for indigenous resistance. This legacy and core indigenous cultural values of reciprocity, embracing duality and seeking balance have heavily influenced politics in present day Bolivia.

One example of indigenous cultural values is on display this month in La Paz. As part of a festival that predates the coming of the Spanish, called Alasitas, Bolivians crowd the streets of the capital city every January. Surrounded by booths selling ‘little things’, people will buy miniature figurines: bundles of money, houses, cellphones, diplomas, and even pocket-sized statues representing a new boyfriend or girlfriend. The “little things” are the desires people have for the New Year. 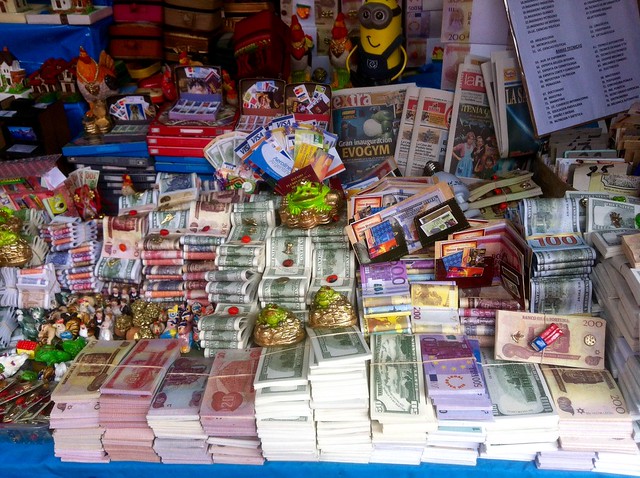 “Everybody gets these little things —medical doctors, professional people, government people —-and brings them to Ekeko, an Indian spirit of abundance,” Toland explains. “The ritual is that then you will buy a bottle of beer or wine or alcohol and shake that bottle and spray Ekeko with a blessing. People might say, well that is superstition. But for many, it is a form of faith, to do something and hope they will get their reward from that. The interesting thing is that after [the ritual], they will go to the Catholic cathedral.”

To outsiders, this embrace of indigenous and Catholic rituals might appear to be contradictory. But Toland argues that for indigenous Bolivians, neither ritual implies a denial or nullification of the other. The implications of this lay way beyond culture. In adopting Catholic and indigenous rituals, “the [cultural] value is seeking harmony and balance. It is [in particular] an Andean mentality and it has an impact on how the people will operate in a more established economic political system. That is what is happening now in Bolivia.”

For the better part of three centuries, indigenous people in present-day Bolivia were under subjugation by the Inca and then the Spanish empires as many were forced to work the country’s silver mines. Conditions did not improve significantly after Bolivia fought and won independence in the early 19th century. As the silver deposits were depleted, tin mining became a critical source of wealth and the local elite implemented new systems to exploit indigenous labor to excavate the metal. This continued through years of war with Peru and Chile, decades of on–again off–again control by military juntas, and years of US intervention and subversion.

Bolivia’s wealth from tin would eventually slow tremendously. During World War II, the US convinced Bolivia to enter on the allied side, in exchange for a US government commitment to buy significant portions of the country’s tin. When the war ended Bolivia was orphaned by the US, as Uncle Sam dumped large amounts of the resource on the world market causing the price to drop dramatically.

In Bolivia shockwaves were felt throughout the entire economy, GDP fell and inflation grew out of control. Toland recalls that in 1982, he used to go around with “shoe boxes of money.” As economic conditions worsened, the US increased its provision of aide to Bolivia while also strengthening its grip on the country’s puppet strings. For “any word or direction of policy change, the word on the street was that the [US] embassy wanted it,” Toland remembers.

Bolivia adopted a new national economic policy, supported by the World Bank and IMF that imposed a number of neoliberal economic changes including, closing the country’s mines, floating the currency, privatizing state-owned enterprises and ending protectionist import substitution industrialization policies. For over a decade, Bolivia followed to a “T the neoliberal Washington consensus,” Toland critiques.

“Bolivia has been seen as [a place where] you go in, you grab what is in the ground, take it out, industrialize it, make money on it and government will get whatever [is given to] them, but [it] won’t be much,” he remarks derisively. Throughout the 1980s, a growing consciousness around having had enough of this became increasingly prominent. As the adoption of neoliberal macroeconomic polices grew, so too did grassroots social movements.

The Growth of Social Movements and the Rise of Evo Morales 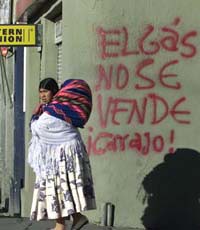 Graffiti that reads: The gas is not for sale. Source: Wikipedia.

Laborers no longer able to find jobs in the country’s struggling mines moved en mass to Cochabamba, Bolivia’s breadbasket, to make a living in farming coca. As in the mines, these primarily indigenous farmers created trade unions to defend and protect workers’ interests.

One of the most formidable members of the coca growers union was a charismatic young indigenous man named Evo Morales. Displaying formidable leadership skills, Morales rose up the ranks quickly and eventually became Secretary General for the coca growers union. Both Morales’ and the union’s influence increased as the Bolivian and US governments sought to dismantle coca cultivation in the country.

By the mid 1990s, popular social movements, including the union of coca growers, movements comprised of women and indigenous people began to come together. Eventually, they formed a political instrument known as the Movimento al Socialismo- Instrumento Político por la Soberanía de los Pueblos, popularly known as MAS, led by Evo Morales. Toland remarks that, “together they made the decision that the vanguard was no longer labor. It was indigenous people.”

Through the 1990s and early 2000s, Morales’ popularity grew as indigenous Bolivians became more dissatisfied with the state. In a series of critical and prolonged social confrontations, the infamous Cochabamba Water War and the Gas War, indigenous communities and others revolted and ushered in changes at the national level that continued to invigorate the growing MAS.

Eventually, in 2006, Evo Morales ran for the presidency and won in a landslide victory. Morales’ victory facilitated nationwide transformation. Looking back on the ten years since, Toland reflects, “Since I’ve been there, since 1971, there has never been a more stable economy and government.”

“But,” he continues, “that doesn’t mean there aren’t factions and fissures and difficulties. They are doing it their way. A cultural current that is very strong in Bolivia is reciprocity. I give you and you give me. We would call that corruption.” But, Toland implies, that is not how indigenous Bolivians would perceive it. Just like the following up of indigenous rituals with Catholic rituals, this new political economy is also about a balancing of forces.

Toland continues, “the government has been able to take back ownership shares in a number of companies but not cut itself off from the global economy. They have been given gold stars from the IMF, World Bank, and US as a place where the economy is stable. On the other side, this is a government that has fallen into Evo as a cacique, the patron who runs things. It is very vertical. A lot of people in government don’t have the skills and it sort of moves from crisis to crises. You have right now a mixed thing.”

The Revolution: A Consciousness of Indigenous Dignity

Yet, even with this mixed assessment of Bolivia’s current political economy, Toland still sees something revolutionary. The impact of the election of the nation’s first indigenous president in a country where indigenous communities have lived under an apartheid type system for centuries cannot be overstated.

Toland ended his talk with a powerful memory from Morales’ inauguration in 2006. The President’s official swearing-in was preceded by an Indian ceremony held at Tiwanaku, a pre-Incan site that Bolivians believe endows its visitors with strength. Toland watched this ceremony unfold with a colleague, an indigenous woman who worked the kitchen of the Maryknoll compound.

Admiring a barefoot Morales clad in the attire of a sun priest, tears welled in her eyes. She whispered, “all our life we have lived humiliated, until this moment.” Her statement embodies what to Toland is perhaps the most critical impact of Bolivia’s political transformation: “the consciousness of their own dignity, their own history and their own traditions, among people who have been told for centuries, ‘you are Indian, you don’t belong at the table. This is not your country, it is our country.’”

Much hangs in the balance for Bolivia’s political economy but certainly this consciousness is one of the most significant successes of the social movements that have brought Bolivia to this point.

For a comprehensive history of Bolivia under Evo Morales’ leadership, see: Evo’s Bolivia by Linda Farthing and Benjamin Kohl, recommended by Gene Toland.