Posted March 29th 2016 at 10:58 am by Insiyah Mohammad Bergeron
in Equity & Climate Resilience 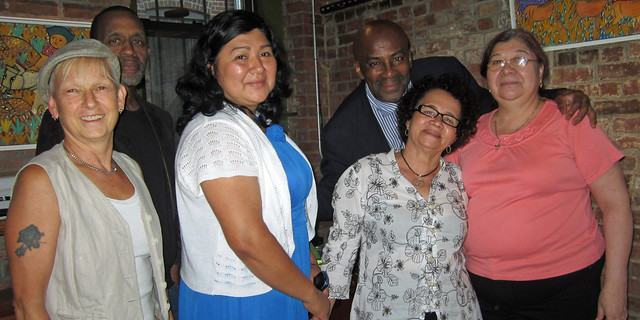 The team behind CERO

What does it take to tap into the green economy to build community wealth? How can anchor institutions help amplify such efforts? Insiyah Mohammad from CoLab Radio interviewed Lor Holmes of CERO (Cooperative Energy, Recycling, and Organics) to find out. CERO is a cooperatively owned composting company that is based in Dorchester, MA.

IM: What is CERO’s origin story?

LH: A group of grassroots folks in Roxbury, Dorchester and East Boston started CERO. They were an unusual mix in Boston because they included Latino immigrants and African American folks who have been here all their lives. They came together because they wanted to create good jobs for themselves, and they wanted those jobs to be part of what they saw as the emerging green economy. They weren’t seeing these opportunities in their neighborhoods, so they felt that they had to create their own. They were also tired of working dead end jobs where they were undervalued and unappreciated.

They knew from the beginning that they wanted to use the worker-owner cooperative model. So they started with that broad scope, and were able to get some small grants from local non-profits to educate themselves about what it would mean to form and run a worker owned cooperative. And then they decided to hire a start-up manager; that’s when I came on board. With marching orders from them, I began looking for business opportunities that met the criteria for our workforce. It’s the opposite of what you see in a traditional business model, where companies enter communities because they want to sell something, or they want to access the workforce. In this case workers are deciding what kind of jobs they want to have for themselves.

We conducted a lot of feasibility studies and in the process came to learn about the new 2014 Food Waste Ban in Massachusetts, that requires commercial producers of 1 ton or more of food waste to divert 50% or more of their waste from landfill and incineration to be used in beneficial ways for the environment. This was exactly the kind of opportunity that our team was interested in, and we ended up building a business plan around it that took into account the different skills in the group including truck driving, community education, and sales. We started to raise money through our crowd funding campaign and then through a Direct Public Offering, which allowed folks in the community to buy shares and help us finance the business. That helped us get some name recognition, and we got a lot of community support- we were famous way before we were profitable!

IM: Can you tell us a little bit more about the founders and what this company means to you all?

LH: Timothy Hall and Steven Evans, two of CERO’s founders, were born and raised in Roxbury, MA, which is one of Boston’s communities of color that not only has lower income and employment rates, and higher incarceration rates per capita, but is also a frontline community that has been impacted by environmental destruction for a long time. There was a time that Roxbury was known for being an illegal transfer station and treated as a landfill site. Tim and Steve got exposed to Van Jones who was the green jobs king in the first Obama administration, and thought “where are all these green jobs, and how come the black and brown people aren’t getting them?” 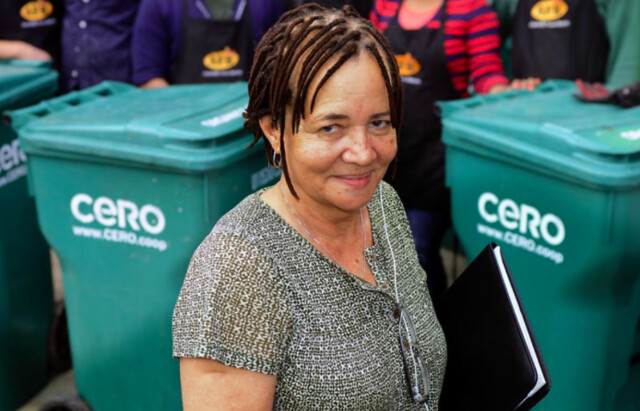 Josefina Luna, one of CERO’s founders

Tim and Steve were part of the Boston Workers Alliance that has done a lot of great work around worker’s rights. Meanwhile Massachusetts Coalition for Occupational Safety and Health (MassCOSH), ran an immigrant workers center where there was a simultaneous conversation going on. These Latino immigrants were trying to make ends meet with their lousy jobs and a lot of them were involved in environmental work within the informal economy- collecting recyclable bottles and scrap metals. BWA and MassCOSH helped these two groups find each other and that’s how they started to have the conversations that led to CERO.

IM: What does tapping into the green economy look like? Where is CERO now?

LH: We started in 2014 and in our first year of operation diverted almost 400 tons of compostable waste back to the land. Now we’re in the next phase of growing our business. Wegman’s grocery store is one of the big companies that we work with. They started with us one week ago, where our agreement was to collect 10 tons a week; they already think that we will need to increase capacity by 40%! We are also now working with a food repackager called DiSilva’s in Chelsea, helping them compost whatever can’t produce be eaten, which we estimate will be more than 4 tons a week. 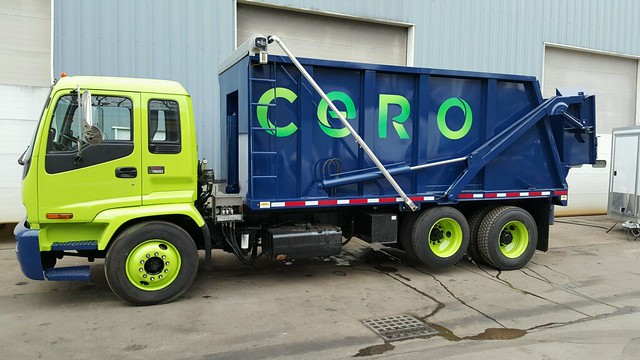 IM: How does CERO’s work connect with climate mitigation efforts?

LH: Compostable waste is the largest methane producer in landfills. Methane has an arguably greater impact on climate change than carbon dioxide because of its potency. When you compost you not only eliminate the production of methane from organic waste, but you also allow the compost in the soil to act as a sponge for carbon in the air. This process of carbon sequestration literally pulls carbon out of the air into the earth, at the same time improving the nutrition, and moisture retention properties of the soil. So much of our farm soil has been depleted by over farming, non-diverse farming and commercial farming. There is a huge immediate benefit to applying compost to soil.

IM: What has your relationship been like with local anchor institutions as you try to grow your business?

LH: This has been a challenge for our organization because a lot of anchors around Boston are not connected with local communities. Education and healthcare are two of the biggest economic sectors in Boston, but getting through to procurement departments at these institutions is difficult. We often spend months just to find somebody to hear our message. It would be great if anchor institutions would prioritize working with their local communities and making sure that the jobs that they provide directly on their campuses, and support indirectly through procurement, could benefit local people.

Some universities have “community liaisons” who go to community meetings and sometimes offer to provide food for picnics, for instance. But those are not perks that drive the local economy. You could feed somebody a hot dog, but it would be better to make the hot dog in the community! I have a lot of great conversations with folks at sustainability offices at anchor institutions. But there seems to be a disconnect between sustainability and procurement offices.

I am far from the only one that is experiencing this problem. There are some organizations locally that are trying to connect small local businesses with anchor institutions like the Ujima Project and the Black Economic Council of Massachusetts. And there are even local politicians like Councilwoman Ayanna Pressley and Councilman Tito Jackson who are interested in this issue. Anchors are certainly an important market that companies like ours would benefit from tapping into more extensively, for a more stable and sustainable future.

Post by Insiyah Mohammad Bergeron. Photo Credit: CERO. Insiyah is a Masters student at the Department of Urban Studies and Planning at MIT.

To learn more about the role of anchor institutions (such as hospitals, community colleges, universities and nonprofit institutions) in climate change mitigation and efforts around economic resilience, join our Twitter Chat from 3 p.m. to 4 p.m. EST on Tuesday March 29th. Check out this post for more information.