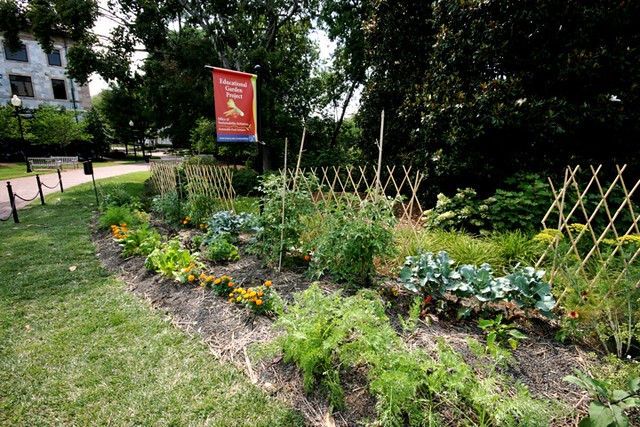 Anchor institutions like universities, play a vital role in helping build community and not just campus sustainability. For example, in Emory’s sustainability initiative, born out of a 2005 strategic plan, one of the most important values is not letting Emory’s campus become a green oasis of privilege where the rest of the community is not also benefiting. From the beginning, we have focused on local procurement and other efforts that directly benefit the community.

When Emory’s first strategic sustainability vision and plan was developed in 2005 it had a lot of ambitions and goals related to local procurement. One of the most striking was the goal of 75% of local or sustainable food in our hospital and campus cafeterias by 2015. We didn’t make that goal this year but we think it is highly likely that in the next year or two we will get to a consistent 50% or better.

Even though Georgia is a very big agriculture state, when we started, most of the agriculture was conventional and not within the standard 150-mile definition of local. So, we started discussing what local meant to us and settled on our 6-state local region. Atlanta is in the center of our state and we just don’t have enough agriculture. Even if I spent every dollar we had at Emory, I still couldn’t have gotten 75% of our food within 150-miles of Atlanta. It just wasn’t there.

When we settled on what we meant by local procurement and set this ambitious goal it was a game-changer. One of our very first hires was a farmer. His role was to go to big agriculture shows to interact with farmers and work with non-profits like Georgia Organics. He disclosed Emory’s commitment to local procurement, sharing that we needed to purchase more local produce. Knowing that they would have a dedicated customer inspired a lot of entrepreneurial farmers to switch from conventional to organic.

A specific example of this is Atlanta Lettuce Works. It came to us through the Community Foundation for Greater Atlanta. They approached Emory to gauge our interest in their Atlanta Wealth Building Initiative, which aims to provide low-skill local jobs in areas that are impoverished and where jobs are scare.

They had looked at the model of the Evergreen Project in Cleveland, Ohio, which followed a similar approach to develop a solar panel factory. At the time, Georgia did not have very positive regulations to support the solar industry. So we discouraged them from pursuing that. We shared that we have a 75% local and sustainable food goal and needed to purchase more local, organic, or otherwise sustainable produce.

One of the most important things we did, was to share that we buy a lot of lettuce and that we’d love to buy lettuce to support the Atlanta Wealth Building Initiative. We signed an MOU to give our assurance. Ellen Macht, the Emory University Goizueta Business School graduate who birth the Atlanta Lettuce Project, tells me that this assurance made a tremendous difference. Atlanta Lettuce Works didn’t want to just be a business that depended on charitable contributions. It needed it to be a viable business that could support itself over time. Enrolling Emory and Emory Healthcare, given the quantity of lettuce that we buy, gave that anchor and allowed them to move forward.

It was very attractive to Emory to support the Atlanta Wealth Building Initiative, an effort to employ people in the hardest hit areas of our community. It is a win-win because we are able to feel really good about the lettuce, but honestly we’d be buying lettuce anyway. So instead of buying any old lettuce we are able to support a program that can uplift people from poverty, a tough situation or joblessness and give them meaningful fulfilling work.

Emory’s official mission is to help affect positive transformation in the world. We are known for doing that in the areas of healthcare, research, teaching, and community outreach programs but we also want to do this through our sustainability initiative and our procurement policies.