The Work of One Organization to Ensure Buffalo's Future

This is the third and final post in a series exploring revitalization in Buffalo, NY. 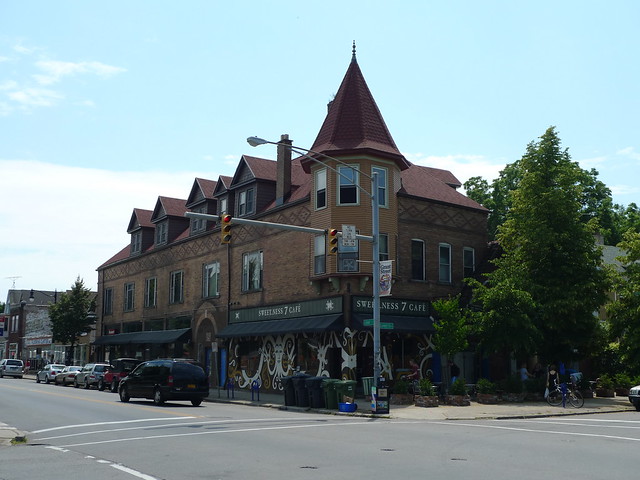 In recent years new businesses have moved into properties along Grant Street in the West Side of Buffalo. Photo Credit: Flickr/Mark Hogan.

Lonnie Barlow was born in Buffalo, New York and works as the communications director for People United for Sustainable Housing or PUSH Buffalo. He cares for his hometown deeply. In a recent exchange I asked him how he envisions the city’s future.

His response began with a reflection on new and old time Buffalo residents. On the one hand, recent arrivals in Buffalo have brought with them fresh energy and ideas to improve the city. On the other hand, longtime residents, have been working on resolving the city’s challenges for many years. Lonnie believes that the two must realize that they complement each other in their work. If this doesn’t happen, Buffalo risks becoming a city of stark dichotomies where gentrified neighborhoods are islands surrounded by areas whose economic fortunes remain grim.

His next point was about immigrants and entrepreneurship. Families from Burma and various nations in Africa, amongst other places, have settled in the West Side of the city. Seized by an entrepreneurial spirit they have opened restaurants, grocery stores, and boutiques along Grant Street (where PUSH does a lot of its work). Lonnie argues that they are now breathing new life into Buffalo, a city lost to some but to these good people from far away a golden opportunity for a better life. I would like to note as well that they are a perfect illustration of how immigrants contribute to America’s prosperity.

Our exchange ended with Lonnie reflecting on PUSH Buffalo’s mission. Helping people to improve the quality of their lives is not a new concept, he argued. But PUSH has adapted it for the second decade of the 21st century. PUSH’s innovative efforts have involved the creation of a social enterprise called PUSH Green, which aggregates homeowners’ projects to lower overall costs and brings in local contractors who adopt high road practices. They have also secured funding for building weatherization, housing redevelopment, land reclamation and even the production of geothermal energy in the West Side of Buffalo. Their resolute focus is on building a sustainable and democratic economy that coexists with and respects the environment. In so doing, they are working to pass on an environmentally and economically healthy Buffalo to future generations.