Posted July 21st 2015 at 1:55 pm by Jason Spicer and Lily Steponaitis
in Banking On Values in Action

Everyone is Entitled to Be A Banker

This is the first in a series of blog posts by Jason Spicer and Lily Steponaitis, who are both conducting research on values-based banking in association with the work of the 2015-2016 class of Mel King Fellows. They are based at the offices of the Global Alliance for Banking on Values (GABV) in the Netherlands this summer, and are also traveling to meet GABV member banks around the world. 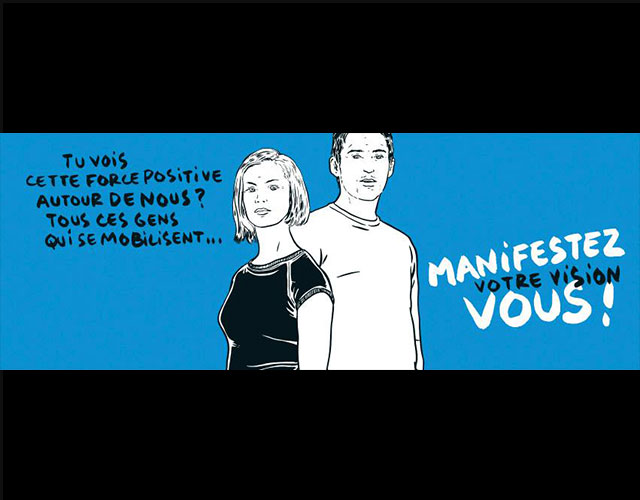 A Crédit Coopératif ad that reads: Do you see the positive force all around us? The people are mobilizing. You can make your vision a reality!

We had the privilege of spending last week in Paris, France, housed at the offices of Crédit Coopératif, which is perhaps the largest cooperative, values-based business bank in the world. With total assets under management (AUM) in excess of $25B, the bank is, by that measure, the largest member of the Global Alliance for Banking on Values. Established over a century ago by France’s cooperative sector to finance cooperatives cooperatively (got that?), Crédit Coopératif is entirely owned by the member customers, who are predominantly businesses. Many of these businesses are cooperatives. In fact, almost half of Crédit Coopératif’s business is accounted for by cooperatives. We believe this business banking orientation makes Crédit Coopératif unusual in the developed world. There are other large cooperative banks and values-based banks, but to our knowledge, there are none of this size focused primarily on commercial and industrial loans and investment products.

Why does France have such an institution, when countries like the United States, for example, do not? It’s partly because French law, in addition to guaranteeing all citizens a right to a bank account, doesn’t restrict the membership criteria for cooperative banks or credit unions as much as in the US. Over the course of 27 meetings with employees and clients of the bank, we saw that France’s banking and legal system is quite different than that in other countries. In going beyond what the law requires in order to serve its member-owners and clients in innovative ways, Crédit Coopératif is also very different than a typical French bank.

One example of this is in the area of equity and inclusion. In France, a 2005 law requires that if handicapped people or individuals with disabilities don’t account for at least 6% of the workforce at a firm with 20 or more employees, the employer must pay a fine. Responding to this law, Crédit Coopératif legally exempted itself from meeting the 6% requirement by signing a contract with the unions. The exemption was allowed due to the high qualifications and specific skill sets needed for employment in much of the banking sector, making it very difficult for a bank to achieve the 6% benchmark. However, despite this exemption, and in contrast to many of its banking sector peers, Crédit Coopératif embarked on an aggressive – and costly – human resources campaign to increase the share of their workforce comprised of handicapped persons, increasing it from roughly 2% to nearly 5% in less than a decade. While still short of the 6% goal, Crédit Coopératif’s independent pursuit of inclusion among its employees is a reflection of its values in action.

Crédit Coopératif’s pro-social policies aren’t just responding to French laws. They also reflect innovations unique to the firm that are embedded in its core banking practices. For example, when lending to small and medium-sized industrial enterprises, Crédit Coopératif could use an existing, legally-created guarantee facility. This is a type of “loan insurance” used to pay the bank back if a loan goes bad. Banks can combine this with the borrower’s personal liability, to make sure their customers’ money is safely lent to these businesses. Instead, Crédit Coopératif worked with industry associations to create a mutually-owned liquidity guarantee fund for each sector, allowing it more security and enabling it to lend more money to these businesses so that they can grow. In doing so, Crédit Coopératif demonstrates its commitment to serving its clients’ needs and growing the social economy.

At the core of Crédit Coopératif’s business model is the belief that money isn’t just money. A dollar isn’t just a dollar, a euro isn’t just a euro. Your money should be used to advance your business, your community, and the causes you care about. Emerging from this idea is a new push for the traceability of money. That is, members have the opportunity to decide where and how their deposits are invested: Do you want your deposits used to fund environmental advocacy organizations and enterprises? Done. Do you want it used to provide loans to fair trade businesses and economic cooperatives? That’s an option, too.

These products, which are available for bank customers who are individuals, businesses, and foundations, go beyond “typical” progressive bank practices, such as allowing depositors to allocate a bit of their interest, or have the bank make a matching interest donation to a charity. Crédit Coopératif is different. The bank builds these options into the structure of its loan portfolio, reflecting “participatory banking” and economic democracy in action.

In the Crédit Coopératif culture, everyone is entitled to be a banker. Keeping with that spirit, we ask you: What sector would you choose to fund at your bank, if you could? And, what would your economy look like if businesses and foundations directed their assets to be lent to specific sectors, through banks that are run like Crédit Coopératif?

Jason (MCP ’14) is a PhD student in the Housing, Community and Economic Development (HCED) group at the Department of Urban Studies and Planning (DUSP) at MIT. Lily (MCP ’14) is a Post-Graduate Fellow at the MIT Community Innovators Lab (CoLab).