Posted May 3rd 2016 at 5:58 am by Grant Williams
in Perspectives on Current Events 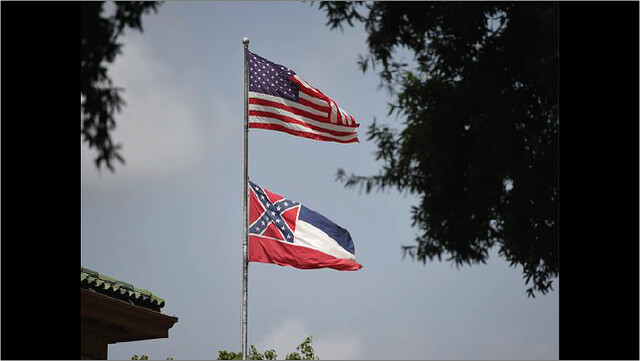 As Black History Month drew to a close, Mississippi Governor Phil Bryan proclaimed April to be Confederate Heritage Month. This has spurred protests across the State, and has given new strength to a quiet movement of faith leaders that have been calling for the Governor to take down the State’s flag for the past 9 months. The flag prominently features the emblem of the Confederate States of America which fought for secession in the American Civil Way, largely in order to maintain the institution of slavery.

The call to take down the flag is not a new fight, or a new message, but a reawakening of the long-enduring legacy of Mississippians taking a stand and leading from a place of love and faith. This past summer I had the privilege of joining alongside many of them in this fight. The audio clips throughout this piece are snippets from their rallies and prayers calling for an end to the State flag and the oppressive structures it represents.

Father Jerry Tobin Transcript: Black Lives matter. No I’m not saying all lives matter. I say black lives matter. Because black folks are being used as cannon fodder. But the Lord hears the cries of the poor. The Lord is a stronghold. Oh we are gonna take down that flag.

The Mississippi flag has long been debated vehemently in the state. William Thompson, the designer of the flag was quoted in 1870, as explaining that it was created as a symbol of white supremacy. “As a people, we are fighting to maintain the heaven-ordained supremacy of the white man over the inferior or colored race,” he said.

When the flag was put to a popular vote in 2001, 65% of Mississippians voted to keep it. The vote was of course, highly racialized. Over 90% of African-Americans opposed it while over 90% of whites stood in favor of maintaining the flag. Yet, the white supremacy that has operated to keep black Mississippians down, has also kept the state down. Mississippi leads the nation in every unfavorable statistic. It seems clear that, as Booker T Washington said, “You can’t hold a man down without staying down with him.”

After the 2001 vote, advocacy around removing or changing the state flag receded for many years, but a group of interfaith leaders in Jackson, Mississippi have taken up the call once again. They have been propelled to action by the racially-charged murders of nine African-Americans worshippers at Emanuel AME church in Charleston, SC on June 17, 2015.

Inspired by ‘Moral Mondays’, the weekly actions held in North Carolina to protest state legislature efforts to rollback democracy and slash public spending, the religious leaders have held weekly prayer vigils, calling on Governor Phil Bredesen to take down the flag. While many may say the flag is merely a cloth and a stick, the faith leaders believe that it is reflective of deep-seated racist prejudice and an ever-present reminder of the dark history of slavery and Jim Crow that continues to plague the State and the Nation.

Bishop Thomas Jenkins Transcript: Father, in the mighty name of Jesus, that name that is above every name, God we ask today that a fire will be released in our city, amongst our people, amongst folks who understand the importance of justice. Father, we pray that a fire will stir them to action. That they will understand that this flag is a curse over our State. They will understand that grandchildren cannot grow up with this curse. That no children can grow up under this curse. That it is time. That it must be removed. And we pray God, that beginning this night, we will see a fire that will zoom over this State.

The message delivered each Thursday night is rooted in the spirituality of southern Black Christianity, replete with praise dance teams, gospel songs, and emotional sermons that echo off the rafters and shake the soul. To many, including Pastor Curtis West, the weekly actions sprout from a tradition of black liberation theology. “The prayer vigils on Thursday night are a reflection of our commitment beyond church. It reminds us that Christianity is a daily walk with the people of God from bondage to freedom, from humanity to divinity,” West says. 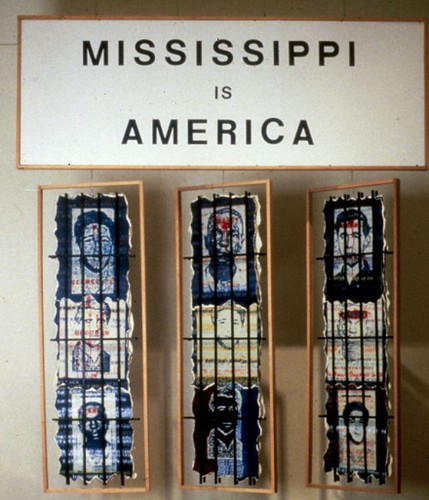 To this group of faith leaders, the immediate issue is the removal of the flag flying over Mississippi. But, their deeper fight is against the enduring legacy of white supremacy that plagues Mississippi and America. While the nation may not be paying attention yet, the faith leaders believe that only by addressing the issue of racism in Mississippi can the United States begin to heal from the spirit of hate that has its roots in Mississippi chattel slavery. As Pastor Curtis West solemnly declares, “If it started with us, it has to end with us.” Mississippi is America.

Reverend Curtis West Transcript: If Mississippi ever repents, you’ve gotten to the root of America’s greatest issue. America’s greatest issue is racism. It is hate. And when Mississippi repents and acknowledges what it has given birth to in America and throughout the world. When Mississippi repents you will begin to see transformation all over the world, not just in America but all over the world. If it started with us, it has to end with us.