Posted May 7th 2015 at 5:48 pm by Kasope Aleshinloye
in Transportation 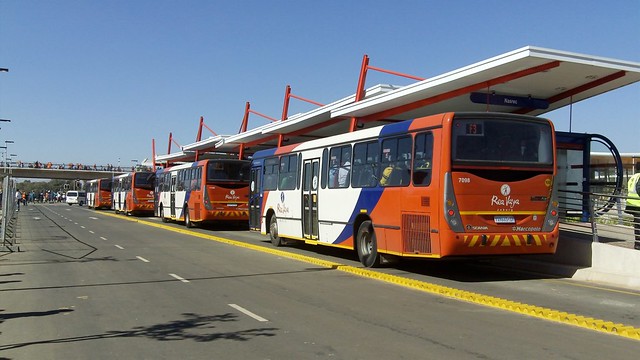 In the last decade, Bus Rapid Transit (BRT) has arisen as a popular means to alleviate congestion and streamline public transit in African cities. The increased formalization of the mass transport industry through BRT demands a high degree of institutional capacity, to construct, operate and maintain the system, as well as guaranteed revenue streams, to ensure the system continues to be financially viable. In previous posts about the success of Lagos BRT and the construction of the Dar Rapid Transit (DART), I wrote about the challenges and opportunities in transitioning towards BRT systems in those cities. Building on those analyses, I would like to examine some of the larger questions surrounding the financing of BRT systems that have aided recent interventions in the mass transit sector.

In addition to the political commitment to improve urban mobility, the availability of financing determines whether a BRT project will be implemented or not. For capital-intensive projects like these, multi-stakeholder partnerships are required. One key group of stakeholders are municipal planning agencies and transit authorities. They can finance infrastructural development with internally-generated revenue or through allocations from regional or national governments. While there is often significant political will at the municipal level to increase mobility and tackle congestion through BRT, these institutions are often restricted by budget constraints and highly dependent on allocations from the central government. Moreover, because there is inter-city (and inter-regional) competition for these allocations, the amount of funding they can allocate for urban infrastructure improvements is often constrained.

Another group of potential BRT backers are private sector institutions. For example, Ecobank Nigeria, a local commerical bank, underwrote the risk for the investment in the Lagos BRT bus fleet by guaranteeing loan repayment for the purchase.

A third set of stakeholders are international development agencies; many have influenced the mass transit agenda in African cities. The World Bank, United Nations Environmental Program (UNEP) and the African Development Bank (AfDB), among others, develop and advocate their own solutions to improve urban infrastructure in Africa. Along with supplying technical advice, these agencies have played an important role in closing the financing gap for BRT.

To illustrate, the Lagos State Government (LASG) developed the 2006 Strategic Master Plan, which included the ensuing Lagos BRT, four years after the World Bank approved a specific investment loan of $100 million to enhance the efficiency of the public transport network in the Lagos Metropolitan Area. A similar project cycle can be traced in the case of Dar es Salaam. The World Bank initially financed the Dar es Salaam Rapid Bus Transit and Traffic Management Study, and DART has received a total of $290 million through the Bank’s International Development Association.

Diversifying the Sources of Funding

While each group of stakeholders remains autonomous in their contribution to BRT project financing, the relative influence of each group may be distorted by its financial capacity. The reliance on international donor support demonstrates that it is particularly important for African cities to diversify their sources of financing for BRT and other capital projects.

An alternative method of filling this financing gap is through the sale of municipal bonds. By raising funds from capital markets, which offer ample financing with attractive interest rates, African cities can focus on long-term planning to carry out multiple, infrastructural development projects. This also enables cities to retain a high degree of autonomy and be less dependent on development financing or allocations from central governments.

The city of Johannesburg has been selling municipal bonds since 2004. Most recently, the city of Dakar, Senegal set up an integrated municipal finance and fiscal framework to enable it to sell the first non-government guaranteed municipal bond outside of South Africa. The proposed $40 million issuance would have funded the construction of a new market hall to house informal vendors and by extension, improved the city’s capacity to generate tax revenue from this sector. Municipal bonds could be issued to finance improvements in public transit infrastructure such as BRT systems. While Dakar’s attempt was ultimately blocked by Senegal’s national government, the city’s comprehensive strategy to build its credit rating and its path to the bond market offers lessons to other African cities in need of infrastructural development funds. 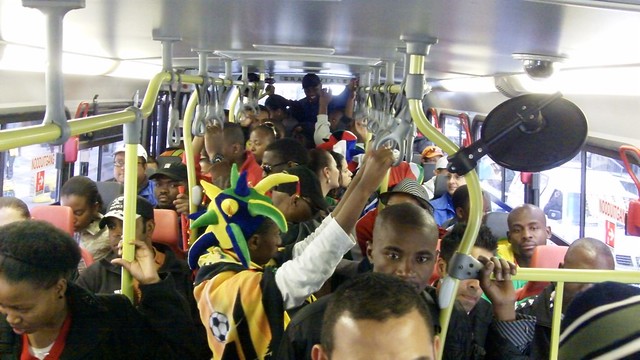 Focusing events can also be used to attract investment in mass transit. In 2006, the same year that South Africa emerged as the host of the 2010 FIFA World Cup, there was a renewed thrust to improve the standard of public transport services. That year, the National Land Transport Strategic Framework (NLTSF) was released. The emergence of BRT in South Africa was closely tied to the goals of the NLTSF for urban transport infrastructure as well as the country’s World Cup transport commitments.

Thus, in Cape Town, Nelson Mandela Bay and Johannesburg, city officials deployed World Cup investments, from the national government and the private sector, to secure long-term benefits for both cities. BRT starter services were initiated immediately prior to the start of the tournament and municipal authorities have expanded and upgraded these networks since. These cities effectively leveraged the World Cup to attract BRT investment.

With the increased rate of urbanization on the continent, other African cities that do not have access to either development assistance or co-benefits of focusing events like the World Cup must also attract investment to improve mobility and reduce congestion.

How then can city officials leverage the political will for BRT (or other improvements in urban mobility) to obtain the required fiscal commitment from central governments or private capital?

While collaboration with development agencies should be encouraged in order to reduce the financial risk incurred in delivering these improved transit resources, African urban planners and policymakers should be equally proactive in developing home-grown, sustainably financed solutions to improve mobility and address climate change. Apart from diversifying the sources of finance for long-term planning, city-level initiatives like the issuance of municipal bonds and inclusive budgetary programs will also improve accountability as urban citizens began to demand more involvement in decision-making. I hope that more African cities apply this paradigm shift in municipal planning and fiscal management to the development and financing of rapid transit options.