Fjord City, Oslo– Planning for Whom?

In the previous post in this series I introduced Fjord City, Oslo’s extensive plan for urban development and renewal of waterfront properties in the heart of the city. Covering 11 areas spanning 2261 acres, the project is estimated to be completed by 2030. Its goal is to create better connections between the city and the fjord.

This post takes a closer look at Tjuvholmen and Bjørvika, two districts in the Fjord City development. The former is one of the first districts to be completed, while the latter is one of the most extensive urban projects in Oslo in recent times. Public debate in the media about progress and change in Tjuvholmen and Bjørvika has raised cultural and socioeconomic questions about the Fjord City developments. 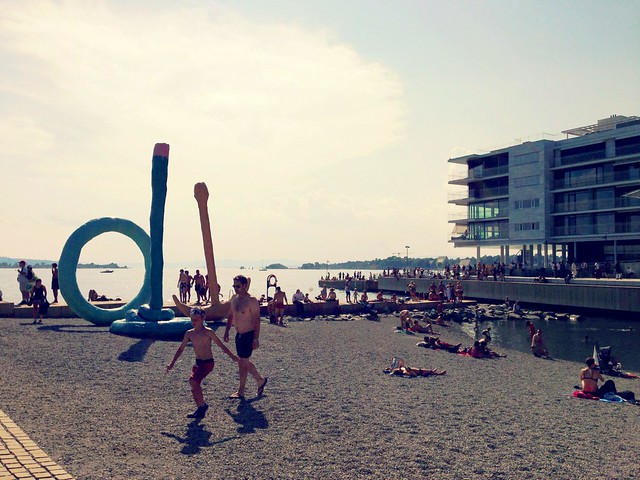 Who owns the sea?

Recent incidents in Tjuvholmen elicit concern about the values being expressed by the planners of Fjord City.

At the end of July, the national newspaper, Aftenposten, wrote about Tjuvholmen residents complaining about bathers going for a dive in the sea during the evenings. The district, idyllically located along the capital’s outstretched shoreline in the west by the new Astrup Fearnley Museum of Modern Art, offers an intimate, yet public, space for visitors and locals to turn a city stroll into a beach retreat. The residents, however, demanding peace and quiet, responded by setting up a sign with restricted access hours to swim at Tjuvholmen. The ban caused a stir among city residents and the local media; the closing time was eventually extended from 8pm to 11pm. 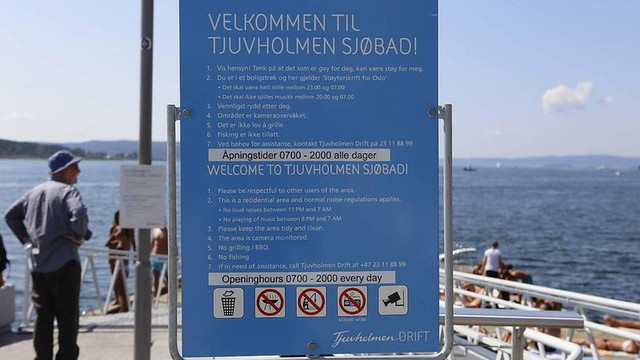 The incident exemplifies emerging tensions in Fjord City. One of the main principles of Fjord City affirms that “the sea is for everyone”. Relatedly, in the planning stage, Tjuvholmen, was imagined as new development that would meet the housing needs occasioned by the expected population growth. Instead, Tjuvholmen now houses the most expensive properties in Oslo. It cannot be the case that those who live by the sea, only those who are able to afford the high, record-breaking prices per square meter, also own the sea. On the contrary, public space ought to be owned by everyone.

Bjørvika is the largest district in the Fjord City plan; it is currently best known for being the home of the National Opera House. Designed by Norwegian architectural firm Snøhetta, whose work also includes the 9/11 Memorial Museum, the building attracted a lot of international attention after it opened in 2008. Unlike Tjuvholmen, whose main challenge was to reclaim land for construction, historical Bjørvika has, for many years, been characterized by strong physical barriers such as highways, railways and confined port areas; these divisions separate the city from the bay area. 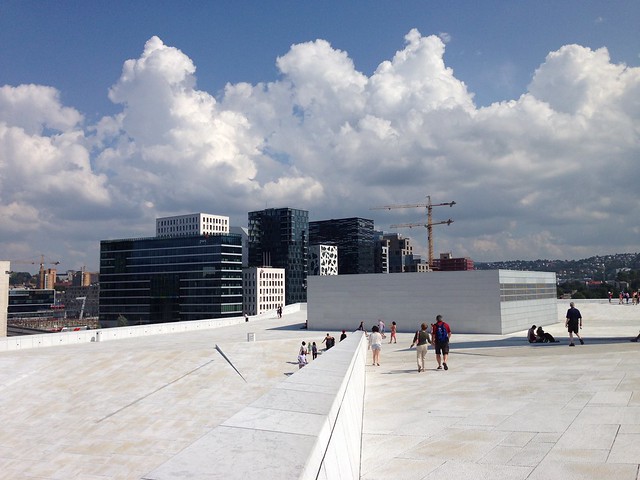 Additions to Fjord City 2007-14. The new corporate blocks known as Barcode, hosting firms like PwC, Deloitte and DNB (the National Bank), as seen from the Opera House.

As such, when plans for the corporate-serving “Barcode Blocks”, pictured above, were announced at the beginning of the 2000s, people feared that corporate buildings would become the new barrier between the city and the waterfront. The first of 12 low-rise buildings in the Barcode Blocks was finished in 2007, though not without the extensive criticism of city inhabitants and other architects. Many argued that the office spaces would destroy Oslo’s character as an open and green city with low-rise buildings. However, since the initial criticism, the public has grown accustomed to the assaulting architecture of Barcode. Most of the buildings are now completed, and the criticism has dissipated extensively. Perhaps, there is a general acquiescence that this is part and parcel of the efforts to “modernize” Fjord City.

While there are plans for incorporating ‘public space’ into the Barcode Blocks, the area is likely to devote more space to corporate activities, and like Tjuvholmen, will have high-end housing and exclusive shops. The 12 buildings hold 10,000 office units and only 500 residential units. According to the plan, some of the country’s most architecturally notable buildings, in addition to the Opera House, will be located within Bjørvika, across the street from Barcode. Though delayed by more than a decade by the city government, The Munch Museum and the Deichmanske Public Library is planned to be completed by 2030.

Recent findings by national engineering experts have stated that these monuments will be resting on some of the country’s most unstable land. With speculations about whether Oslo literally is sinking towards the sea, the future of these monuments is tenuous. But, if everything goes according to the Fjord City timeline, Bjørvika will certainly become a new cultural emblem for Oslo, if not Norway.

Only time will shed light on this tension between balancing corporate headquarters and monumental cultural attractions.

Essentially, the development of Fjord City is supported by public resources; as such, the broadly shared vision is that the end result will produce new, rejuvenated, city spaces for the public – locals and visitors alike. As the case of Tjuvholmen demonstrates, this vision can be easily compromised and threatened. The city government and major agencies responsible for Fjord City cannot allow the development, built through extensive public funding, to end up being reserved for private residents. Bjørvika was planned with the hopes of maximizing public space and with clear architectural standards; these ideals seem increasingly elusive. The city of the future is supposed to be a result of strategic democratic long-term plans. For Fjord City, debate spurring from Tjuvholmen and Bjørvika suggests paradoxes in city planning that envisions of a waterfront for all.

Posts and photos by Diana Hunyh, unless noted.