How do you Humanize the Planning Process to Prioritize Gender Equity? 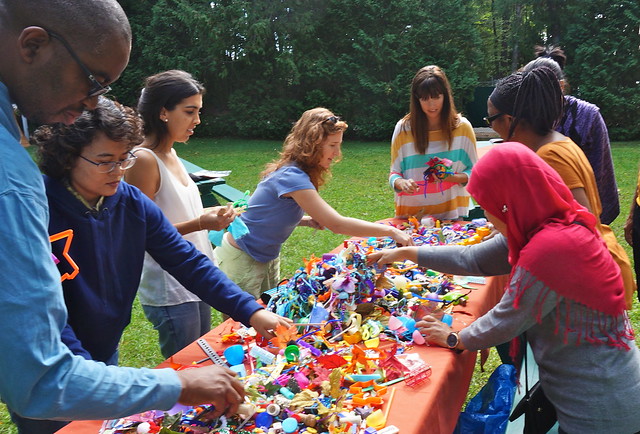 As the eldest of three siblings I used to defend my sister against my younger brother. He is a type A male and would always try to manipulate every situation in his favor. My sister was passive and would be forced to give in if I didn’t intervene.

Today as an urban planner I witness this same situation unfolding between aggressive and passive participants in public meetings. I am tired of attending public meeting where the loudest voice dominates the conversation.

Recently I collaborated with MIT’s SPURS Fellows to investigate gender equity in creating public spaces through a Place It workshop. The SPURS program brings together mid-career professionals from developing countries to study urban planning for one year at MIT. This year’s cohort consisted of nine women and six men from Africa, Asia, Europe, and Latin America. 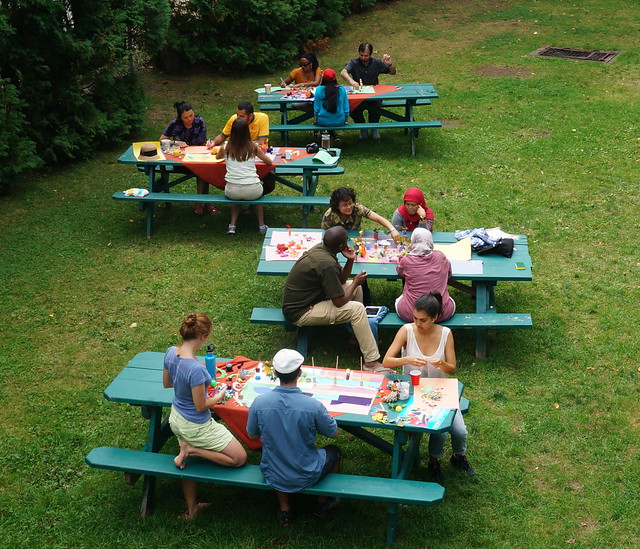 As urban planners we strive for inclusion. Sometimes, however, we forget what makes us human and how we relate to one another. The SPURS fellows, like everyone else, experience the world through their respective lenses based on gender, race and geography. My Place IT workshop created a format for the fellows to share, respect, and celebrate these perspectives.

The workshop began with storytelling and did not use standard urban planning communication tools such as maps, numbers, computer models, and policy. These tools are excellent at capturing various aspects of urban space and life, but necessarily do so in an abstracted way. Instead, we used found objects. This made it possible to engage the fellows in spatiality rich and subtle ways of knowing that aren’t possible using other communication methods.

This approach to exploring gender equity was not a competition among different interests, in which the loudest person or the biggest group wins but a collaborative one. Collaborative experiences and activities — not competitions — allowed fellows to listen, and learn from everyone’s needs and values. 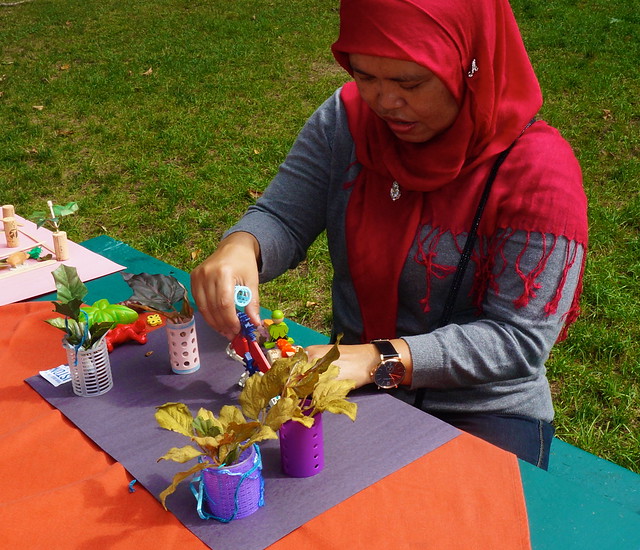 As an initial icebreaker the fellows were asked to build their first childhood memory of a safe place outside their home. They had fifteen minutes to self-reflect and construct their memory by choosing from hundreds of small objects. The activity began with no discussion, maps, or power point presentations that would taint their memory.

They were given no constraints and were assured that there were no right or wrong answers. This lack of rules allowed them to think quickly, freely and take ownership of the process.

Once the fellows started to explore and touch the objects, the creative process began. Their first step was to choose pieces that they liked, or that could help them reconstruct a memory, or experience. 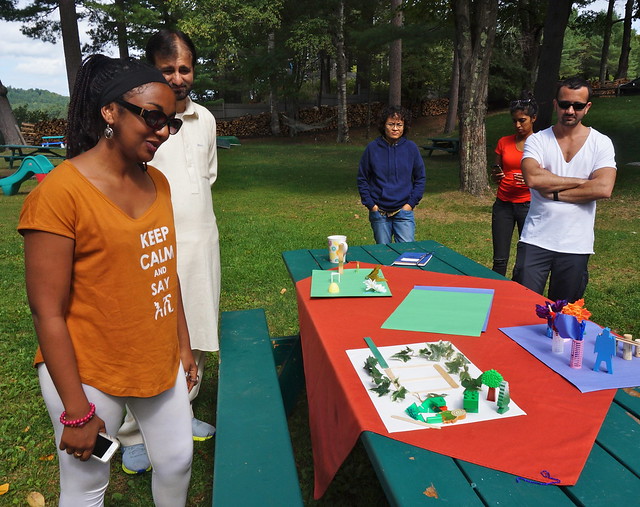 Organizing the objects on a piece of construction paper, the fellows moved furiously as their designs began to unfold. For the next ten minutes the participants conjured up their childhood safe spaces in a meditative state.

As they slowed down, looks of satisfaction began to appear. The fellows walked around looking at the dioramas created by their colleagues and pulled out their cell phones to take pictures of their models.

The fellows listened with great enthusiasm to each other’s brief explanation of their models. From the woman who built a model of her grandmother’s farm in Brazil to the man who modeled a rail road tracks in China, the activity brought up diverse landscapes and experiences.

After each participant presented their model, the fellows discussed common themes that were consistent through everybody’s memories. These included: family, community, nature, physical activity, access, sharing, curiosity, imagination, and familiarity. No matter where, when, and how the fellows had grown up, they learned they shared similar experiences.

Through storytelling, the fellows quickly became empathetic toward each other and bonded. Building their story with objects allowed participants to investigate the physical details of place that matter and what they remember. For example, most of the models had trees, animals, people, benches, and playground equipment that connected individuals to their environment. The models provided rich visual, and spatial information about what constituted a safe space for the fellows. They can never relive these memories but the fellows can design places that include physical details that contribute to a feeling of safety. 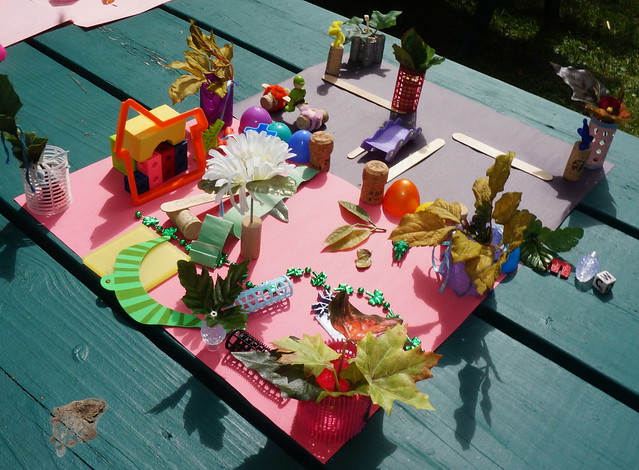 The first individual activity prepared the fellows for the next collaborative activity. The fellows were placed in mixed gender teams. Each team was asked to build a gender-friendly place in the city based on their childhood memories, experiences and imagination. They had just 15 minutes and were instructed to use the same objects from the first exercise.

The collective nature of this activity provided a platform for everyone to participate regardless of typical barriers. For example, building with objects on imaginary maps allowed fellows to illustrate and negotiate ideas that would have been difficult to describe using words alone. As team members tested their ideas with their colleagues, models began to fill the tabletops. When time was up, each team presented their place to the group. Their designs included: safe and accessible streets with key traffic calming measures, a playground in a vacant lot between two buildings, a natural site with a river, and streets with open views focused on transparency.

In working with the objects to build their designs, the fellows were able to easily collaborate and in a relaxed atmosphere generate insights for designing gender friendly places. Moreover, the physical design process prompted questions and comments about gender equity that go beyond the physical and begin to address economic discrepancies like affordable housing, childcare, or transportation.

We live in a world in which women’s experiences are not always highlighted or respected in the urban planning outreach process. Humanizing and relaxing the community meeting format be integrating storytelling, imagination, found objects, and hands-on activities allows for all voices to be expressed in a variety of different ways. Having the men and women fellows collaborate, allowed for the women to take the lead and teach the males how to create a gender friendly place. 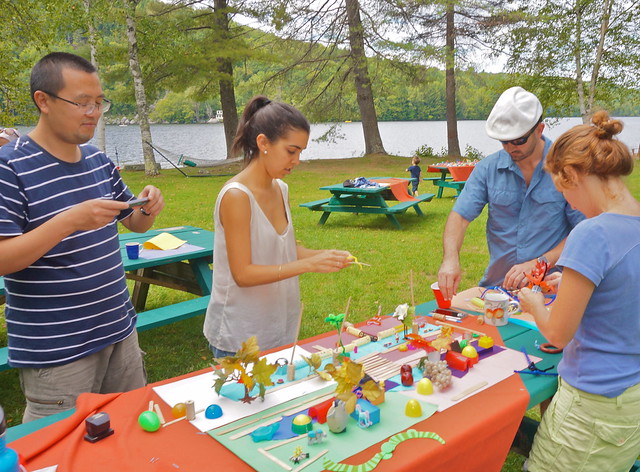 Post and photos by James Rojas, city planner and founder of Place It.