Keeping Baltimore Cool, Especially for its Most Vulnerable Residents 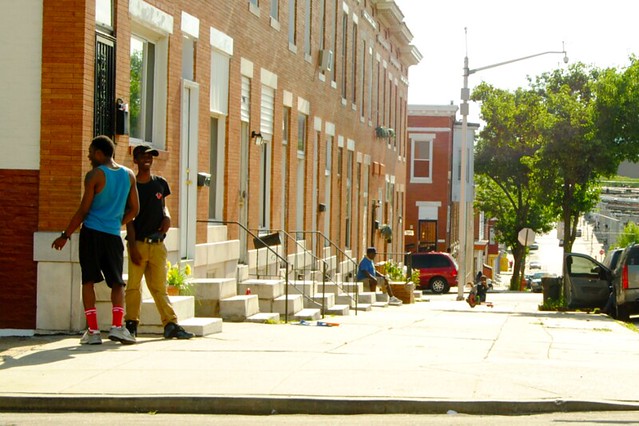 This story was originally written for the Great American Adaptation Road Trip in June 2013 and has been adapted for MIT CoLab Radio.

Baltimore is known as the “city of neighborhoods.” When we passed through in the summer of 2013, Kristin Baja, the Climate and Resilience Planner for the city, was working on learning the names of all 225. At the time, she was eight months into the job and doing pretty well—as we drove around the city, she rattled off names: Patterson Park, the Middle East, Four By Four (actually a four block by four block square), Oliver. Easier than memorizing neighborhoods, though, is figuring out what areas of the city are in need of more tree canopy.

“We’re conducting a vulnerability assessment to help inform planning; however it’s pretty obvious which neighborhoods are in need of trees just by walking through them,” Baja said.

We drove down inner city streets that were completely devoid of canopy, many of which were also peppered with abandoned homes. At midday, there was no hiding from the sun. 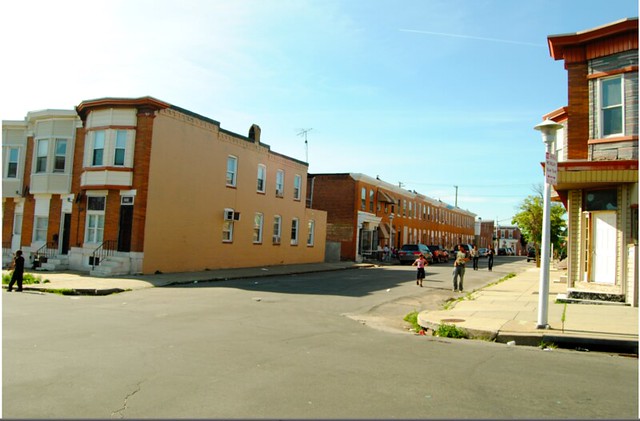 To address the tree canopy shortage, in 2006 the then-Mayor set a goal of doubling the urban tree canopy to 40 percent by 2037. With the 2013 canopy at 27.4 percent, the City was trying to coordinate tree planting efforts under TreeBaltimore, run by the Department of Recreation and Parks’ Urban Forestry Division. An important part of this effort is to ensure that new trees are planted where they are most needed. When we visited, trees had been going in the ground at a rate of 3,000 per year since 2009.

“The urban heat island is a big problem in Baltimore. The tree canopy is extremely limited the closer you get to city’s core,” Baja told us.

The urban heat island effect occurs when developed areas absorb more heat than the surrounding rural areas. In 2008, an analysis by NASA showed that Baltimore’s surface temperature can be up to 50 degrees Fahrenheit hotter in the city center when compared to the surrounding forest. The City’s Climate Action Plan predicts that Baltimore will experience between 15 and 35 days over 100 degrees Fahrenheit by 2100, as compared to the average five days per year at the end of the 20th Century. These predictions are especially concerning for Baltimore’s vulnerable population of elderly, poor, and homeless residents.

Tree canopies can lower direct temperatures up to 9 degrees Fahrenheit, but they also have many co-benefits. They absorb air pollutants and stormwater, plus they cool buildings, reducing energy bills—the ultimate green infrastructure. Canopy can also make neighborhoods safer. A 2012 study showed that a 10 percent increase in Baltimore’s tree canopy is associated with a 12 percent decrease in the neighborhood crime rate. A young resident of North Luzerne Avenue told Baja that the trees planted on the block changed the way people were talking to each other and that she actually felt safer.

Three years later, Baja, who continues her work with the City of Baltimore, has probably mastered the names of all 225 neighborhoods, and the saplings, now three years stronger, are hopefully providing some relief to the Baltimore residents who need it most.

After completing graduate school at the University of Michigan School of Natural Resources and Environment, Kirsten Howard and Allie Goldstein embarked on the Great American Adaptation Road Trip during which they drove around the country seeking stories of community resilience in the face of climate change impacts. You can read more of their road trip stories at www.adaptationstories.com.

Follow #citychat on Twitter from 3 p.m. to 4 p.m. EST on Tuesday May 31st to learn more about how green infrastructure can contribute to community resilience and wealth. Even if you don’t have a Twitter account, you can watch the conversation unfold here.