Posted January 13th 2017 at 9:04 am by Lawrence Barriner II
in Media for Movement Building

Today’s class began with grievances and a quick check-in about how everyone’s interviews went. Everyone seemed to be in a good place and some groups even felt like they were welcomed into the family of their interviewees. Some of the groups had close to two hours of audio each! 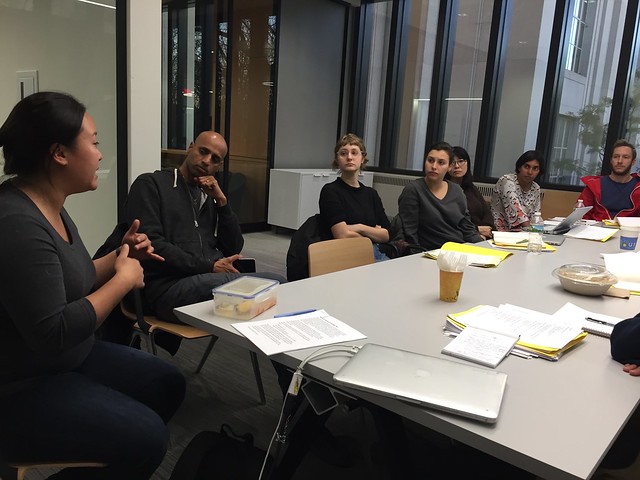 Then we did a brief activity about framing and editing. We used the canonical example of the April 9, 2003 toppling of the Saddam Hussein statue in Firdaus (Firdos) Square in downtown Bagdhad. The crux of the activity was how the media framed the toppling initially and then how, almost ten years later, the actual story was revealed (see resources below). We discussed what a frame is and how media makers shape the perceptions of their audience by what they choose to put in (and leave out of) the frame of a story.

Three different framings of the toppling of the Hussein statue

We then moved over to our computer lab and did our first dive into our editing software for the course, Adobe Audition. Each group listened to its audio, marked their audio clips, and made major content cuts. The goal was to get down to the 25 or so minutes that would be the bulk of the final pieces. It was a stretch for many groups, but all the groups made progress.