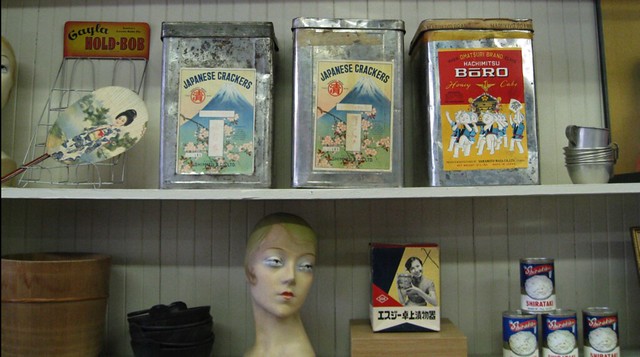 Researchers use a wide variety of social science methods for learning about cities and the communities within them, but many of these traditional means ignore alternative forms of knowledge. During the third PAR speaker series talk on October 29th, artists and educators, Katherine Shozawa and Catherine D’Ignazio discussed how critical information cannot always be captured through these conventional practices.

Aesthetics present a completely distinct realm of inquiry and knowledge-creation. It is a way of creating familiarity with and empathy for realities not captured by conventional forms of data or comprehended by scientific explanation, particularly those involving conflicts of culture, identity, and experience.  Disciplines such as fiction writing, film, photography, music, and sculpture can help us know places and people better, as well as facilitate connection and understanding between individuals. PAR scholarship is often enriched by these other ways of knowing, communicating, and disseminating knowledge. 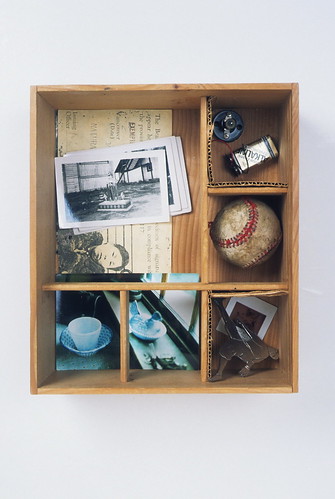 Katherine Shozawa discussed three projects that embody very different sorts of relationships to visual thinking, art making, and urban histories. She shared stories about two former post-WWII Japantowns, one in Seattle, WA and the other north of the border in Vancouver, B.C. Canada.  She also discussed Japanese-Canadian and Japanese-American redress and reparations from 4.5 years of internment or mass incarceration during WWII. Shozawa created the memory box project collaboratively with Japanese Canadian elders who endured incarceration during World War II. In this project, elders’ stories and material objects from their past are displayed in small wooden boxes.   She also presented a community art redevelopment project, Kobo at Higo, which is a gallery space in Seattle, Washington that occupies the former Higo variety store from the 1930’s, and maintains much of its old world character.

Shozawa introduced the term perceptive ambiguities, which refers to epistemological stances that allows an observer to make sense of the world before familiarity or “what one already knows” comes into play.  The idea of perceptive ambiguities is really important in participatory action research because it is what allows people to collaborate and see from one another’s point of view.

At the end of her presentation, Shozawa left the audience with some key questions:

To demonstrate how art and culture can activate the civic imagination, she begun with showing the audience a temporary public art installation at the University of Massachusetts Amherst known as “The Border Crossed Us.” The project aims to understand how the international border in Arizona, seemingly remote from a college campus in northern New England, touches all of our lives.  D’Ignazio presented photographer Dulce Pinzon’s images of migrant workers who are dressed as superheroes to show how art can reframe the mainstream narratives about this population and their livelihoods. 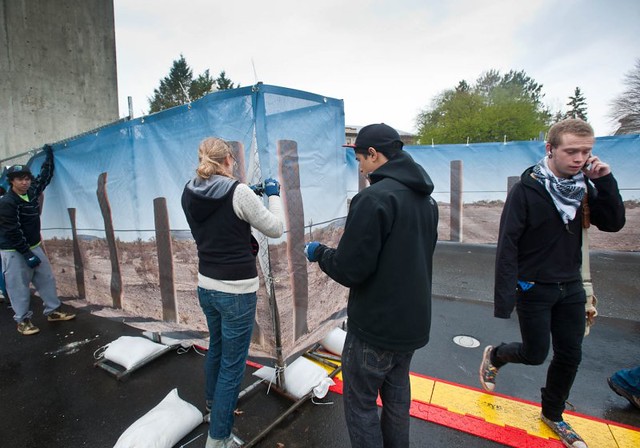 To exemplify her second point– that aesthetic experiences offer us a way of performing power even when we do not have it– D’Iganzio presented the project “The City Formerly Known as Cambridge.” In this project residents could rename all of the city’s public spaces and created maps with these newly named spaces. 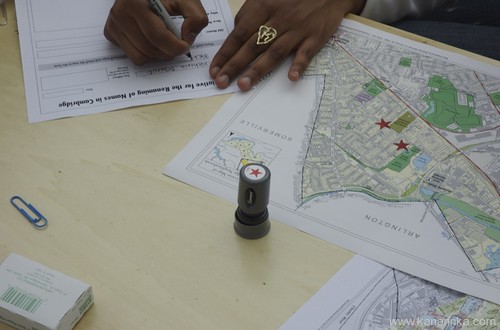 The City Formerly Known as Cambridge project in progress

Lastly, D’Ignazio discussed how knowledge production and understanding come from the act of creating and making. The MIT “Make the Breast Pump Not Suck” Hackathon is an example of how engineers, designers, midwives, and parents collaborated to design novel solutions to this “loathed trapping of modern-day motherhood.”

From both of these presentations, we learn about how aesthetics help us to imagine, deliberate, design and understand research.

Katherine Shozawa is a Canadian interdisciplinary artist, educator and curator who blends community engagement with contemporary art practice. Most recently, she was an artist-in-residence with the Philadelphia Mural Arts Program exploring the textile industry’s past and present in the city.  She has also designed several participatory exhibitions about Japanese internment during World War II in the U.S. and Canada. Catherine D’Ignazio is an artist and assistant professor of Data Visualization Storytelling and Civic Media at Emerson College. Her projects combine the visual arts and technology to engage viewers on various political issues.