“When I loose my voice, people tell me “go home Jale, ‘cause your working tool is broken. My tool is my voice. If I don’t shout, I do nothing.” – Jale

Profiled in Pregoneros de Medellin (in English, the Criers of Medellin), an interactive web documentary, Jale, quoted above, is a street vendor in Colombia’s second largest city. In the web documentary, viewers/ participants virtually stroll through the city’s downtown, listening to the urban soundscape and stopping intermittently to hear the stories of vendors like Jale, who use rhythm — simple, often funny and repetitive songs and chants—to share bits and pieces of their life experiences and to sell their products.

For most Colombians, vendors who use songs and chants to sell their goods are ubiquitous; not a phenomenon that would require much pause or consideration. But, for Ángela, Juliana, Esau CarabalÍ and Thibault Durand, creators of Pregoneros de Medellin, and their team, this is not the case. Through their immersive, interactive transmedia project, they help viewers become sensitive to the sounds and the stories on Medellin’s streets.

In the Q&A below, Thibault Durand, the co-director of the interactive web documentary and Mario Barros, the Director of photography, camera and editing, share the back story behind Pregoneros de Medellin, and discuss the power of listening, nuancing perceptions and building trust.

Nse Umoh Esema: How did you all come up with the idea for Pregoneros de Medellin?

Thibault Durand (Co-Director) – The idea started years ago with Esau, Ángela, and Juliana CarabalÍ, the director and her brothers. For a long time, they had listened to singing street vendors in their neighborhood. They had always thought it was really artistic and nice, but they didn’t do anything with it.

Three years ago, Ángela really started to dig into this idea and started a project taking photographs and producing sound recordings of the street vendors in Medellin. I met her 2 years ago and she told me what she had been doing and showed me some pictures and I became interested. Because I’m a software developer, we started to work on an interactive documentary.

NUE- What was the team’s relationship to the vendors featured in the project? How did you identify who to focus on and how did you get them to participate?

MB- So, like we mentioned before, Ángela was doing another project with the same premise, so she had met some vendors already. Some of them stuck in her head. When she got the last bit of funding she started researching a little more. She started meeting with a lot of vendors and would track them in a database. Noting which ones were charming, had chants that were a little different, and who seemed like great characters, but were potentially repetitive. Then there was the painful process of deciding who to include and who to leave out because we started getting attached to a lot of them.

TD– When trying to find street vendors we also used social media. We bought ads on Facebook asking people whether they had any charismatic, funny, and friendly street vendors passing by their streets. We built on our database of vendors with this information and one week I went with Ángela on a motorbike and visited all the locations people had shared with us.

When we met the vendors we had to build a trusting relationship because we were entering deeply into their lives. Building trust is a long process and Ángela did a great job with this along with a friend, Ángela Castano who was helping us to find some vendors. Jale, for example, we have known for 3 years and we consider her a friend. 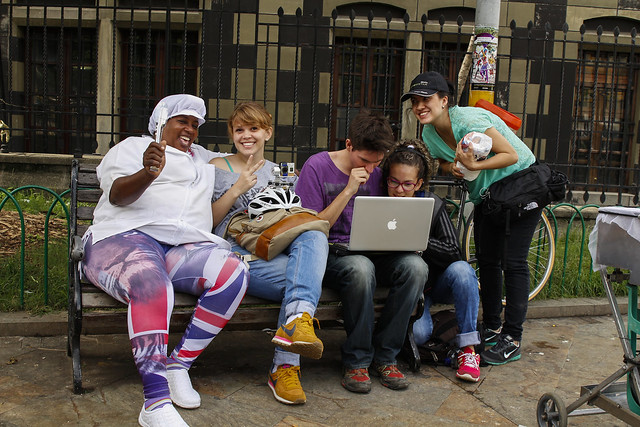 MB– Actually if you watch the teasers that were made with Jale a year and a half ago and watch the interactive documentary, you can see her evolution. In the teaser she is talking but doesn’t seem invested in the project. In her video in the interactive documentary that we shot in November of 2014, she seems like she has much more confidence and trusts the team. Ángela had been meeting with her a lot so she felt like she was with a friend. You can just feel that she is in a relaxed place.

Also, we were all laughing and cheering with the characters, so they weren’t just people we were recording. We treated them as equals so they didn’t feel like we were just using their story. We are friends with each other and the characters; that allowed people to open up.

Teaser for Pregoneros de Medellin, made a year and a half ago, described above by Mario.

TD– It was really important to have a local team. Everyone who worked on this project is from Colombia. I’m the only foreigner; the one French guy. Also, most of the team is from Medellin so they know how to behave in different neighborhoods and how to build trusting relationships. I think it was fundamental that our project have a local team with people from Medellin.

NUE- What surprised you most about the stories the street vendors shared?

MB-I was surprised at Jale’s ability to keep the bad stuff inside & just laugh. There is a video where she talks about how she doesn’t have savings, a pension, retirement or healthcare. But then, she makes a joke and cracks up. We know that she does that with everything in her life. She talks about problems a lot but then she starts laughing. She once shared about how her son denied her because he was ashamed of her. But then she laughed. To me it seemed a bit weird, but it is what makes her who she is. Everyone who knows her thinks she is happy all the time, because she is. She faces life with a smile. I don’t think she is hiding sadness or depression. When something is bad she decides to be happy. 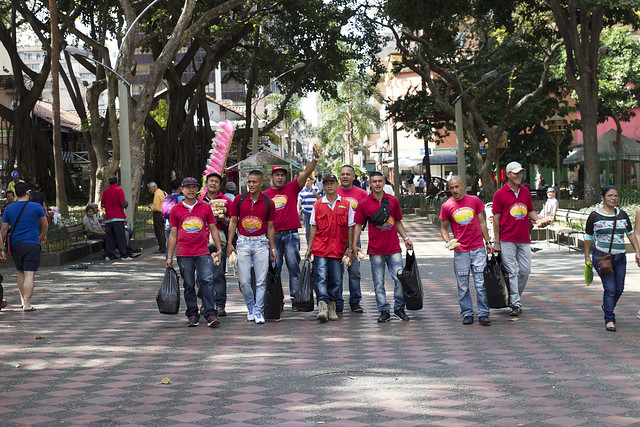 The other thing that shocked me was the group of young men recovering from addiction. They say in the documentary, that some of them were addicts who lived in the streets and felt outside of society. So when they go out and yell and chant they feel included in society again. That got me in my feelings. 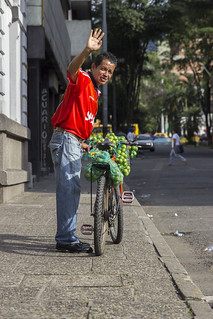 TD-The person who touched me the most was Limon Pajaritó (the lemon seller.) He has like four jobs and has gone through a lot of things. He was the poorest of all the characters, but he is really happy. It is incredible. He takes every day as it comes. He lives in a tiny dormitory room with just a bed and some books. He was the person who touched me the most.

NUE– How are street vendors in Medellin perceived and how do you think this project might help change that perception?

TD-I will share my thoughts and Mario will correct me if I’m wrong, as I’ve only been in Colombia for 2 years. I think informal selling in the street here is very common. Everyone buys from people selling in the street. Though not everyone sings. So they are well perceived by the people. They aren’t too discriminated against. But, the elite parents tell their kids things like, “You need to work in school, if not you will be selling avocados in the streets.”

MB– Yes, what Thibault says is true. What I think we did with this transmedia project is to show these vendors as humans, as people we pass by everyday. Through the project, we can go deep inside their lives and understand why they do it. Maybe they are doing it because they have children to feed. Maybe they are doing it to pay rent. The project takes a deeper look at this.

They have had to invent techniques to get more customers. If you have a talent for singing or rhyming or you can be charming and build relationships easily, people will buy from you. So vendors sell their products with gusto and with spice so that people will come to them and buy from them. They are entrepreneurs.

TD– I read that more or less 50% of all the work in Colombia is informal. These people represent 50% of society. For a French guy like me where we don’t have precarious work situations like this, I was surprised. But we decided not to address this in the documentary.

MB-Yeah, it was focused more on the people and the lives of the people. We never engaged the question of what do you think of informal work or tried to start a discussion around whether it should be legal or not. It was more about people. 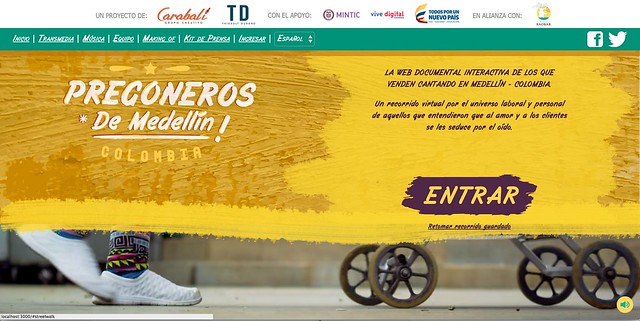