In Dakar, Accra, and Johannesburg, three women are developing urban cultural spaces for African children centered around play and learning. Curious to understand what they might learn from each other’s experiences they engaged in a Q&A triangle. This is the first post in the series where Gretchen Wilson-Prangley of Play Africa in Johannesburg, South Africa interviewed Amowi Phillips of Mmofra Foundation in Accra, Ghana. 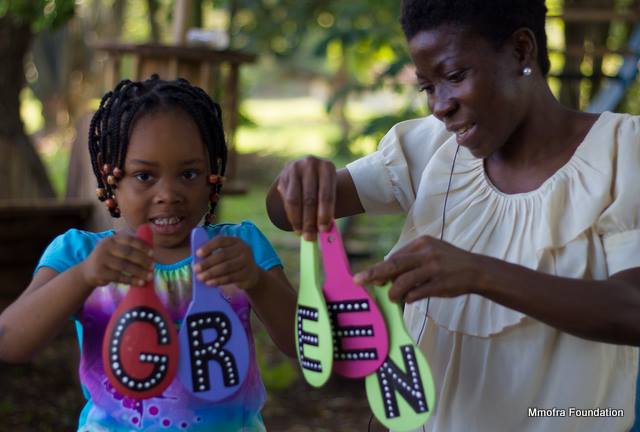 Gretchen Wilson-Prangley: At Play Africa we are truly inspired by the work you are doing at Mmofra Foundation in Accra. Can you start by telling us a bit about Accra?

Amowi Phillips: Accra has grown a great deal over the last two decades and in general many more children are growing up in urban Ghana than ever before. With rapid growth, we’re seeing stresses on city infrastructure – power, water, sanitation for instance – that directly impact children’s wellbeing. We believe it’s possible for cultural organizations like ours to address these development challenges.

Gretchen Wilson-Prangley: I think that is a really important point because the work we are all trying to do is so multifaceted. While it is around children it is about trying to respond to the various challenges we are facing in urban environments across the continent and to different extents, urban environments across the world too. Where did Mmofra Foundation come from?

Amowi Phillips: Mmofra means children. Our mission is to support the cultural and intellectual life of children in Ghana outside the classroom. We have a rather prescriptive legacy of formal education in Ghana, so this mission was very important to my mother, Efua Sutherland, the founder of our organization.. She was a Ghanaian writer, educator, dramatist, and cultural activist and was really the person who in the era of independence began an indigenous children’s literature movement. She encouraged institutions that were grounded in our own culture and environment.

Efua Sutherland founded Mmofra in the 90s but passed away in 1996 before the organization went active. So this really has been a legacy project. Originally, we provided an outdoor invitational environment for children under some trees, with carefully selected books and the opportunity to interact with all sorts of interesting people. In 2012 we launched the Playtime in Africa Project. Playtime in Africa is the development of a physical 2-acre site in Accra as the home for our programs. It is about creating a natural learning environment, maker-space and child centered community hub, and championing open public space for children. 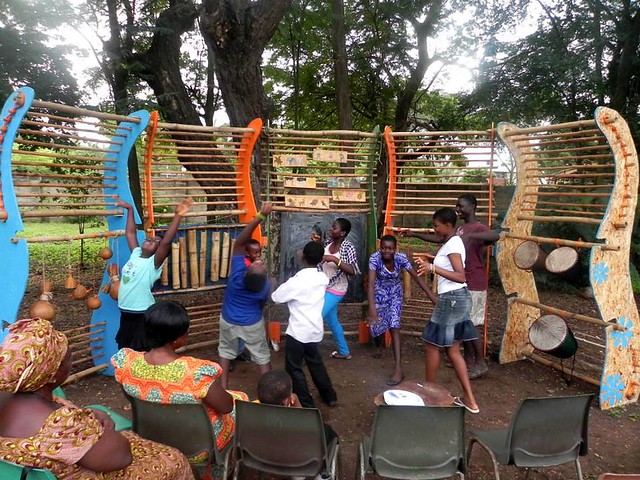 Gretchen Wilson-Prangley: Everything you are saying is striking a cord with our work at Play Africa in South Africa. We feel we have so much to learn from your experiences. Can you tell me a bit about the urban environment and child centered spaces in Accra and tell me how the Playtime in Africa project fits into that?

Amowi Phillips: We have almost no publicly accessible green space in urban Ghana. The parks that were set up in the 1980s have deteriorated and even the ones that continue to exist are vulnerable and under threat. I’m speaking, for example, of a 12-acre space in downtown Accra which Efua Sutherland championed in the same way Wangari Maathai battled for Uhuru Park in Nairobi. This space was retained in the middle of a high value financial district in Accra and yet there is always some threat of having it taken over for building.

Playtime in Africa is re-establishing this model of child centered cultural and physical space, which we badly need. Parents are very anxious to put their children through the formal education pipeline and they often don’t recognize the connection between play and learning. We try to remind them of it.

There is also a certain anxiety about the written word. I don’t know if it comes from our colonial legacy or what but we are not playful with the written word, particularly English. We restrict it to the textbook and the classroom, in that boxed- in environment. Mmofra Foundation wants to break out of that and inscribe literacy into the landscape. 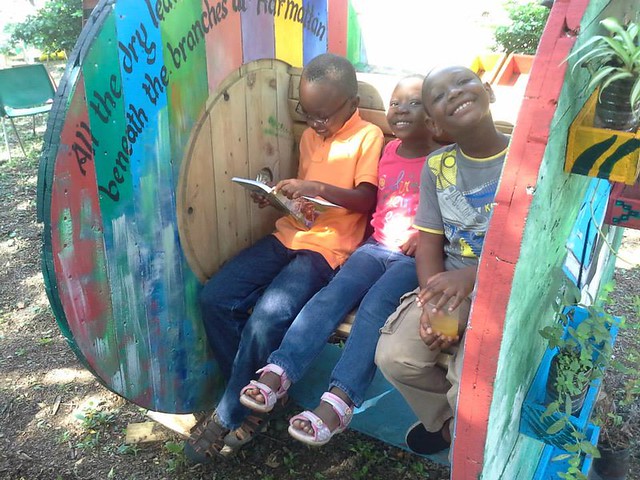 Gretchen Wilson-Prangley: What are some of the biggest successes you’ve had?

Amowi Phillips: Because of the profession of our founder we’ve been grounded in literacy based programming. We’ve been able to create a literary ecosystem. This isn’t just about carefully chosen reading materials for children. It’s about exposing them to writers, storytelling and language. It is about creating audio books, and recognizing and celebrating writing and illustration with African content by African writers.

Think about World Book Day – you hear kids say, “I’m going to be dressed up as Harry Potter,” or some other character from a classic book. I have never seen an African book celebrated in that way or a poem by an African poet inscribed in a spiral in a landscape or written on a wall. I think those are really important ways of making literature a sensory experience.

Gretchen Wilson-Prangley: You have played such an incredible leadership role on the continent in this so I just want to thank you. I know it hasn’t been easy. What have been some of your greatest challenges?

Amowi Phillips: Last year within a quarter mile radius of the park we had a cholera outbreak. When you bring children together under those conditions what do you do? We are having to design for that. We are trying to figure out how to make a hand washing ritual part of the fun and the first thing you do when you enter the park. The question is how do you design it so that it is robust but attractive and fun so children are instinctively drawn to it? 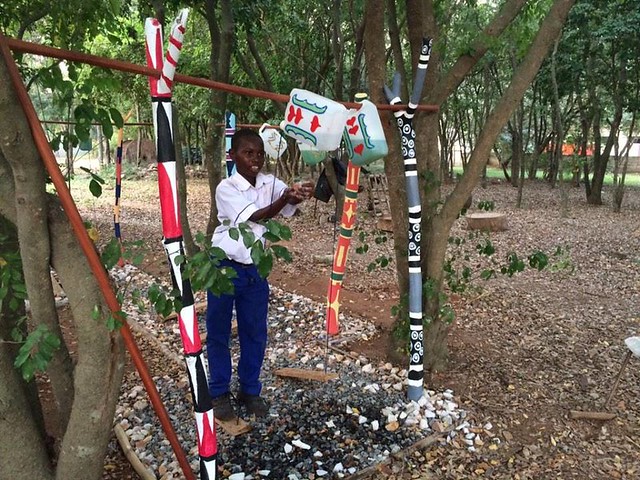 This is probably one of the only spaces where you will have children from different socioeconomic groups spending time together. Elsewhere their lives don’t intersect. But it is critically important that they mix; that the children see the value in each other. For example, the kids from the lower income communities are the ones most likely to build their own toys. It would be great for kids who can afford toys to learn from other kids how to make things for themselves with their own hands. Design is such a big part of what we are learning. How do you design to meet these challenges? To make places that work for kids and communities? 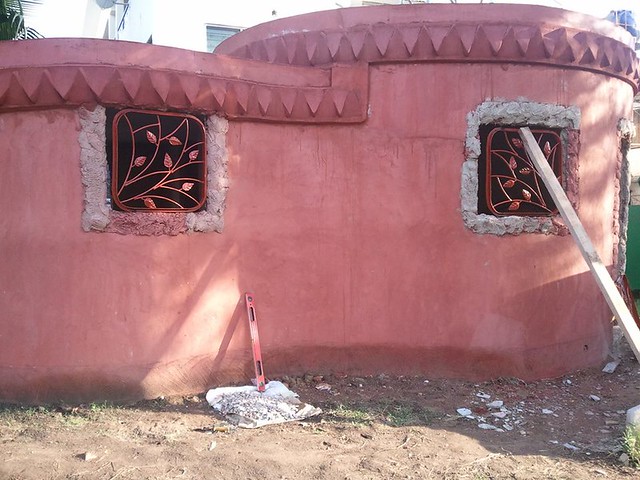 Another challenge is that Accra is water stressed and has inadequate power. We have dug a borehole to have access to water and our toilets are composting toilets. But we are doing it in a way that can be teachable and made beautiful. I heard a statement recently by Theaster Gates that I love: beauty is a basic service. When we built our composting toilet I said we would not have a box with a zinc roof on it. We have the technology of the eco toilet but what we then did was create around it a building after the style of Northern Ghana architecture. We hope to put an amazing mural on it that communicates to kids the importance of washing hands and how the process of the toilet works. We are combining utility and practicality with education and aesthetics across the park as much as possible.

Amowi Phillips: There is so much from all over the continent to work with in terms of material culture, and language. We want the park to reflect this. For example, we have a mural inspired by Adire, a Nigerian textile artform. As it went up I noticed that the pattern consisted of squares, rectangles and dots. It is a wall that a toddler can learn mathematical concepts from. They can climb up and point to shapes or imagine anything they like. 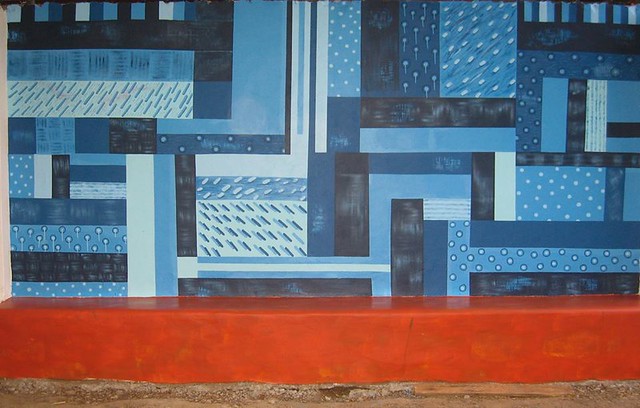 If we can reflect many different arts and cultural traditions from across the continent on the site, it will be wonderful.

We’d really like to see a network of African people and institutions who are doing this work, and interact with them because there isn’t enough intra-African exchange. If we knew and appreciated each other’s cultures maybe what is happening in South Africa right now wouldn’t be happening today. It is rare to have books from other African countries in Ghana. We just don’t. Even story books about Ghana may be more available abroad than in Ghana.

It’s imperative that we document the work we are all doing and pull it together on some platform especially as our institutions are developing in a specifically African context.