Posted September 28th 2015 at 11:21 am by Alexa Mills
in Perspectives on Current Events

The Displaced Artists of Somerville 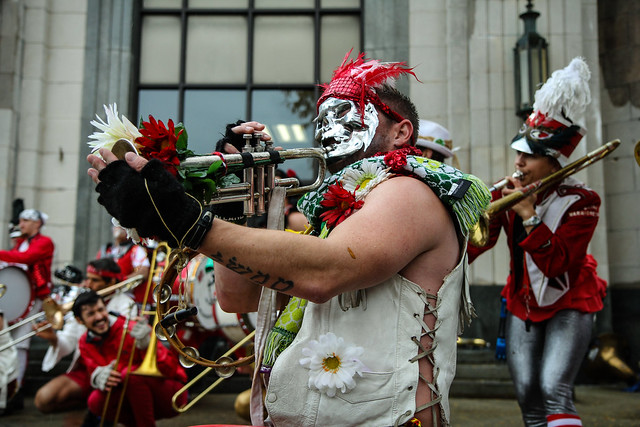 Skyrocketing rents are all the talk in Somerville, Mass. this September. The city of 79,000, once known by the nickname “Slum-aville,” is an easy commute from both Cambridge and Boston, and home to a robust community of artists and musicians.

While rent hikes impact every person struggling to make ends meet, the historic art-maker community of Somerville has been particularly vocal over the past year.

“The number of people who have moved lately – it’s insane,” said Tim Devin, Somerville artist and co-founder of Getting By In Boston, a discussion forum for area artists struggling to make ends meet. He co-founded the group with fellow artist Jason Pramas and sociologist Matthew Kaliner in 2014, because area artists were having so much trouble getting by.

The unaware poster boy for the displaced artists of 2015 has become Roger Clark Miller, whose famed band Mission of Burma was an early influence on both the indie rock and punk movements back in the early 1980s.

When Miller moved to Boston in 1978, rent was among the least of his concerns. At one point, he said, he managed to secure an illegal loft apartment in Boston’s Chinatown for $50 a month. Today, a luxury residential tower touting itself as “a shimmering glass sculpture in the sky” is under construction about six blocks from Miller’s 1980’s punk rocker loft.

Today, at 63 years old, Miller is still a full-time internationally touring musician. He was living in a one-bedroom unit with a small music studio in Somerville for the price of $1,475 per month, he said, when he got word that his landlord was going to sell the building.

Have Rents Really Spiked in Somerville?

Sale signs mark many yards in Miller’s former neighborhood. On leafy Cedar Street, 21 housing units, in 8 buildings, sold in the year 2014, according to the city assessor’s database. Most condos sold for more than $500,000 each. For residents who walk a street like Cedar each day, the trend is hard to miss.

In August of 2015, Public Lab co-founder and Union United member Jeffrey Warren circulated an informal survey titled “Rent Went Up,” directed at Somerville and Cambridge residents. Most of the 120 respondents, submitting by September 28th, reported a rent increase of $100 – $200 per month. Collectively, the survey respondents suffered a $352,920 increase in annual rent.

Artist Meagan O’Brien counts herself in the high end of that spectrum. O’Brien occupied one room in a 4-bedroom apartment, and had taken on the responsibility of finding tenants for the other three bedrooms. She said she’d settled on a price and tenants with her landlord, when he surprised her with a request for a meeting.

“I thought I was going upstairs to sign a lease,” said O’Brien, “but then [my landlord] started acting all somber and strange.” She said her landlord told her rent would increase by $900.

Somerville has averaged 422 condo sales per year over the past 5 years, according to the Greater Boston Housing Report Card, making it one of the strongest city markets in the region.

In the first two quarters of 2015, though, the market shifted in Somerville. Private real estate blogs and publications like this one reported a decrease in the number of houses and condos sold, but a significant increase in price per unit.

With limited stock and high demand, Somerville home prices have soared in 2015. 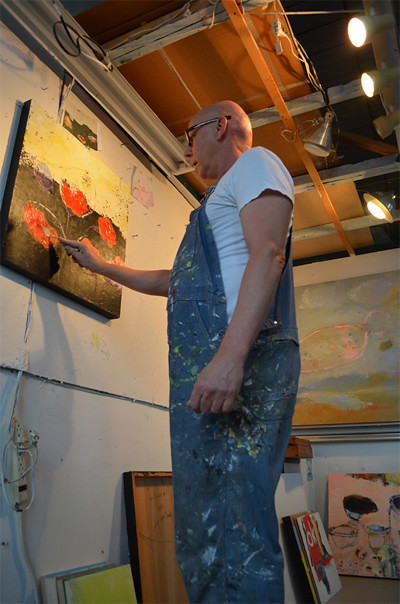 Decades ago, Somerville had factory and warehouse space to spare. Today, artists get on waitlists for studio space.

Ellie Jones, who manages the waitlist for Vernon Street Studios, says she has more than 350 artists on her list, waiting for one of the 93 studios at the facility. “The list just grows every year,” said Jones. Artists at Vernon Street Studios have the option to renew their leases each year, and most of them do. Jones said that she’s had some artists on the waitlist since 2009.

In early 2015, after the former Powder House Community School became available for redevelopment, the City of Somerville issued a Request For Proposals.

A group called Somerville Makers and Artists, Inc., submitted a proposal to transform the old school into studio and exhibition space, with a gallery for selling art and classrooms for the community.

Artisan’s Asylum, a Somerville art production space which also keeps a waitlist for its studios, collaborated on a proposal for the Powder House School. Artisan’s Asylum and their partners also proposed studio, exhibition, and selling space, as well as a 35-unit condominium building.

Neither artist group won the bid. A proposal primarily focused on housing, including some residential units set aside for artists, won out.

Not Only Artists Facing Rent Increases

Somerville artists and musicians are quick to point out that they are not experiencing rent increases alone. Warren’s “Rent Went Up” survey was not directed at artists, but all people facing a significant rent increase.

Artists often have a particular role in the evolution of a city’s housing prices. The cycle goes like this: Artists and musicians move in to an area with low rents and high vacancy. The low cost of living enables them to dedicate abundant time to creative work. Because music is meant to be heard and art is meant to be seen, their work becomes collectively visible. The area develops a reputation for being a good place to live. Rents rise, and wealthier people with more stable incomes move in, eventually displacing the original artists.

Other resident groups have a similar impact: the neighbors who turn a vacant lot into a community garden, the crime prevention group, the block party committee.

Dr. Matthew Kaliner, a researcher at Harvard and also a founder of “Getting By In Boston,” studies the dynamics of artist communities, and sees Somerville fitting in to a national, historic trend.

“Every time artists make the neighborhood better, it’s another reason for the rent to go up,” said Kaliner. “My burning question is: How do you improve a place without making people precarious and vulnerable?”

Where Do Displaced Artists go? 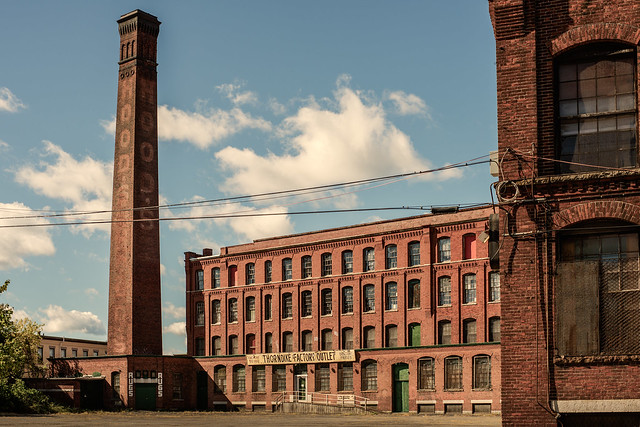 The City of Lowell, a 28-mile drive north of Somerville, is best known for being a powerhouse factory town during the American Industrial Revolution. Today housing is more affordable there, and many of the old mill buildings still stand.

Several artists interviewed for this article speculated that people who are priced out of Somerville choose Lowell and nearby Lawrence, as well as cheaper, inner-ring suburbs like Malden and Medford. Those who can afford Somerville’s rising rents might opt for Brooklyn, where they can have easy access to New York’s internationally recognized art scene.

Meagan O’Brien is considering a move to Troy, New York. She said that the city hosts a small but vibrant arts scene, and rents are dirt cheap. Troy is a three-hour drive to New York City.

Others are hanging on in Somerville. Liz LaManche, most famous locally for tattooing an entire pier in East Boston for the annual HarborArts Festival, a project for which she received no payment, is staying. “I’m doing ok for now because I’m staying in an old friend’s group house, and she gives me a deal on rent in exchange for me being able to make the room available to other visiting friends occasionally,” wrote LaManche in an email. 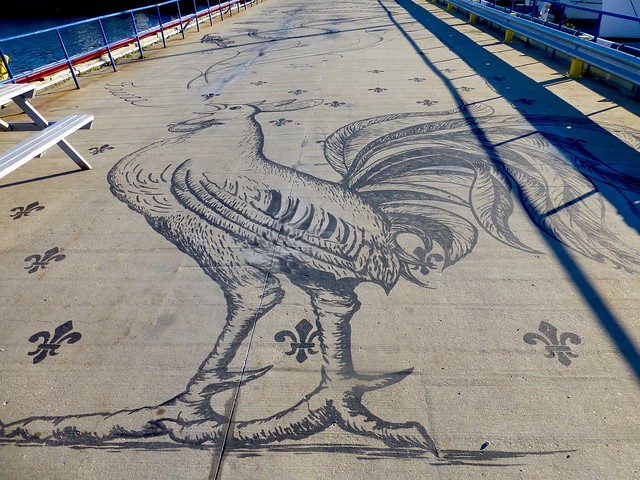 Sidewalk tattoo of a rooster at a pier in East Boston by Liz LaManche. Photo Credit: Flickr/Leslee_atflickr.

Dr. Samuel Shaw, a Vanderbilt University sociologist, has found that most artists cannot simply move to a cheap town. The idea that an artist can find a rundown cottage in the in the woods is more myth than reality.

“I would say that artists are highly concerned with where they live,” said Shaw, who studies artist communities. “They need to be in a reputable place, so that they can be part of a recognized scene.”

“My street, Highland Road, was the most beautiful street in Somerville,” said Miller, who has nothing but warm feelings for the city that embraced him and his music.

When he found out his building was for sale, he deliberated for a total of 15 hours. He’d had a 36-year run in Boston. Any increase in rent would be a financial burden. His girlfriend, also a Somerville artist, had secured a home in Vermont. He decided to trade in urban beauty for rural beauty.

“When I wake up in the morning,” said Miller, who just moved to Vermont,“I see a fox. I hear a bird. It’s beautiful.”

“Punk was when I blossomed,” recalled Miller, of his early years in Somerville. “I was earning $300 a month from my band, and I was able to live on that. You can’t live on that anymore, and over all, that’s just a huge negative for civilization.”

“People will always find a way,” said Miller, “but I’ll tell you, it was a lot easier in the punk rock era.”