Posted June 1st 2017 at 8:09 am by Jason Spicer
in Cooperatives & New Business Models

The French Connection: Cooperatives at the Heart of the “Social and Solidarity Economy”

Just a block from the famed Paris Catacombs lies one of city’s top temporary visitor attractions, now garnering 2,000 visitors a day. A temporary showpiece for something called the “social and solidarity economy”, Les Grands Voisins (The Great Neighbors) houses as many as 600 residents and 200 cooperative, non-profit, and sustainability-oriented organizations, all on the 8-acre site of an aging troubled public hospital which was closed in 2012. The city plan for the site will see it redeveloped into a sustainable eco-district, where a majority of housing units will be affordable, but its interim use is garnering attention as a “utopian village”. 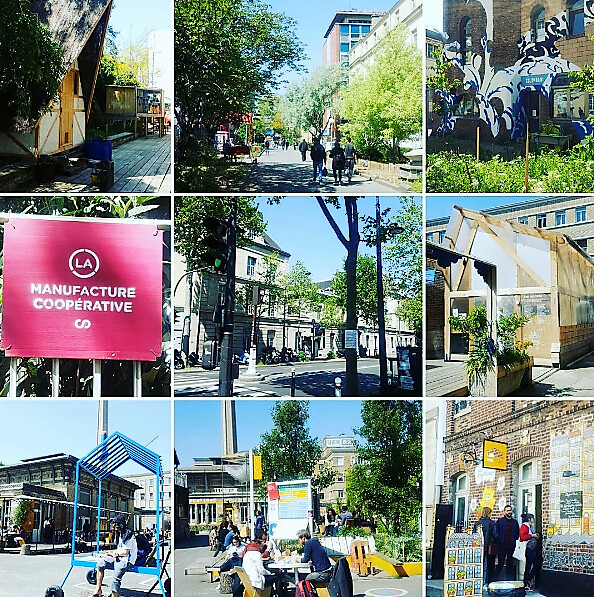 Les Grands Voisins, a temporary, rent-free utopian village for cooperatives and allied groups in the social and solidarity economy, shows Paris’ creative use of underutilized or temporarily vacant urban spaces.

While a few of the organizations may be able to remain at the redeveloped project, most will seek out new homes, and will hopefully have been “jump-started” by the temporary rent-free space and the network connections formed at the site. And on a permanent basis, across the river on the other side of town, they will find a meeting place at Les Canaux, the house for the Social and Solidarity Economy sector, which will occupy an older structure now under renovation on the Canal. 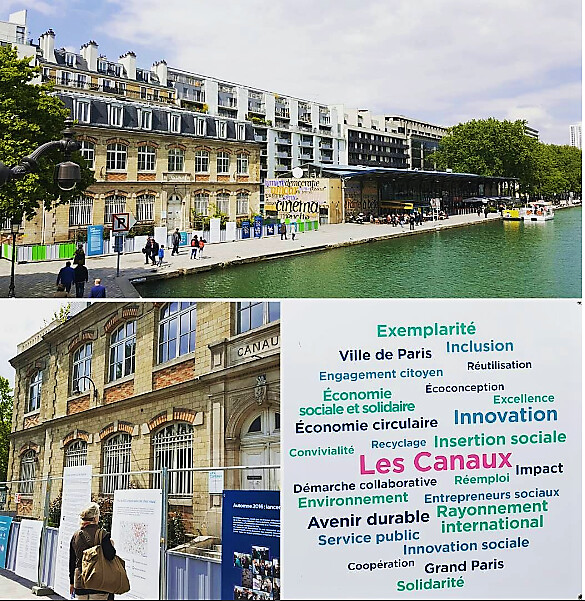 This historic structure is being redeveloped by the City of Paris and Yunus Foundation as Les Canaux, a new home for the social and solidarity economy in Paris.

The project, an idea of the mayor of Paris (Anne Hidalgo) and Nobel-prize winning Muhammed Yunus, will house both a convening and meeting space for the sector, as well as the Paris office of the Yunus Foundation. Other new spaces to incubate the next generation of such enterprises are also being created. Solidarité Étudiante, a student cooperative group, is currently renovating space into a cooperative and social business incubator and co-working atelier, ESS’pace, on a university campus on the left bank. The project is being funded by a consortium of cooperative developers and financiers, with participatory budgeting funds from the City of Paris, too. In Saint-Denis, which adjoins Paris and known as one of the city’s under-resourced “banlieues”, Coopérative Pointcarré is a boutique café, coworking space and atelier, offering cooperatively-oriented seminars and trainings in a renovated and previously empty garage. It is part of Coopaname, a larger network of Paris worker-owned and employment development cooperatives. 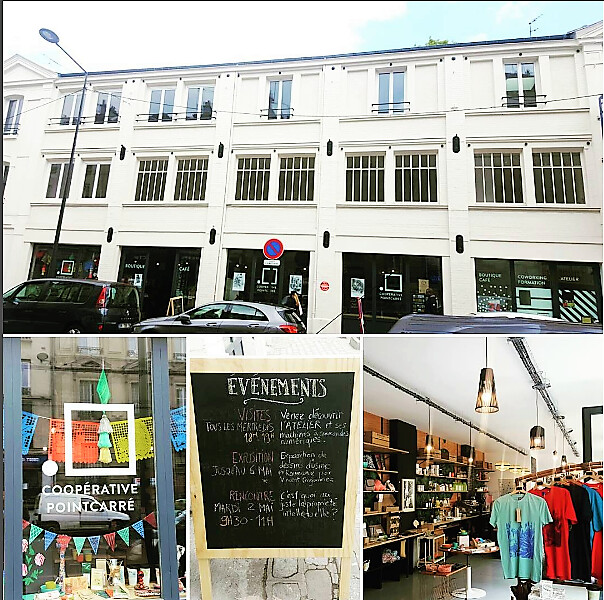 A vacant three-story garage building in Saint-Denis, a lower-income first-ring suburb (banlieue) of Paris, has been redeveloped into a cooperative complex, as part of Paris’ Coopaname network.

What are all these cool reuses of urban space for social aim, and how is this all happening in a pricey city like Paris? Is this the latest version of the famous but short-lived “Paris communes”, which have been created repeatedly in the past? Not quite. Rather, these installations in Paris are supported by the large, complex network that is the French social and solidarity economy, a sector that is here to stay.

If you are an American, or really, from any Anglophone nation, odds are that you don’t know what this social and solidarity economy term precisely means. You might hear people talk about the social economy, social enterprise, or even the solidarity economy, perhaps, and have a vague sense of what that might mean. What is it? As noted by one sectoral stakeholder I interviewed in France, “There are two worlds. One world is about using money in business to make more money. That world is the “classic enterprise” model. Another world is about using money in business to serve people’s needs. In that world, you still want to make money, enough to cover your costs with some reserves for security and reinvestment, but it’s not about money for more money. That’s not the primary goal. It’s about turning money into something else. This second world is the world of the social and solidarity economy, with cooperatives at its heart.”

In France, the social and solidarity economy, or ESS for short (l’économie sociale et solidaire) is a formal, legally defined sector of the economy and accounts for between 10-15% of the economy. It includes cooperatives, as well as most associations, foundations, and some social enterprises, too, that adhere to democratic principles of operation, finance and ownership. These principles, set out under a comprehensive law passed in 2014, was enacted while the newly-elected President of France, Macron, was the Minister of the Economy. These laws make it easier for ESS firms to raise money and coordinate their efforts, and enhances the structures and incentives for individuals and institutions to invest in them.

The law is one of a long series of national regulations which address the needs of the cooperative sector and the broader ESS. In fact, there are 16 different types of cooperatives grouped into 11 families, created by national laws in France. They include the worker cooperative (SCOP), the multi-stakeholder cooperative (SCIC), an employment/workforce development cooperative (CAE) the cooperative bank, and even a artisan’s cooperative and a maritime cooperative. Some of these forms can reduce their tax burden if they reinvest their surplus into developing the organization, while others are eligible for favorable treatment in government procurement, nationwide. Some cooperative forms, by legal right, can also be used by workers to acquire a private sector business that an investor wants to shutter. Others, still, can utilize cooperative “preferred equity” (called titre participative), a type of special, legally-created equity investment, or “90/10 solidarity funds”, which are linked to the mainstream mutual fund and retirement investment system. And yes, a few are eligible for special government subsidies. But most are not.

Each legal form of cooperative is set up to meet the needs of different groups in society, and those particular member-owners. Sectoral feedback is communicated to the government through a group of formal, national organizing bodies, some specialized by legal sub-type. Most of these national entities are based on a network structure of regional federations. This mirrors the structure of many large cooperatives in France, too, which are often constructed as a federation or network of other, smaller cooperatives.

While a complicated system, I’d argue it is no more complicated than America’s corporate laws. In France, the ESS has enhanced the resilience of the cooperative ecosystem, which has been able to adjust and change with the times. It’s possible for a French person to live their entire economic life within the ESS, or even just within the cooperative ecosystem. Do you want a cooperative bank, one that focuses on lending to other cooperatives? You have Credit Cooperatif (featured in this post) and La Nef. Want to invest in a cooperative through crowdfunding? There’s Wiseed. Looking for cooperative preferred equity? Esfin Gestion can provide it. Need to hire a worker cooperative construction company for a big project? There’s UTB. Accounting and consulting services? Finacoop. Employee benefit packages and business services? Groupe Up. Insurance? MACIF, MAIF, or Agr2 La Mondiale. Looking for a cooperative restaurant? Les Temps de Cerises. Cooperative food? There’s Invvivo, and many more. A cooperative grocer? Too many to list, but the national, organics-focused Biocoop network is popular. Cooperative energy? There’s the Enercoop network. Looking for a cooperative that will help you trade services with others? There’s FranceBarter. A thriving arts, media and cultural cooperative? Try Clarabis. A car-sharing coop? Check out Citiz. 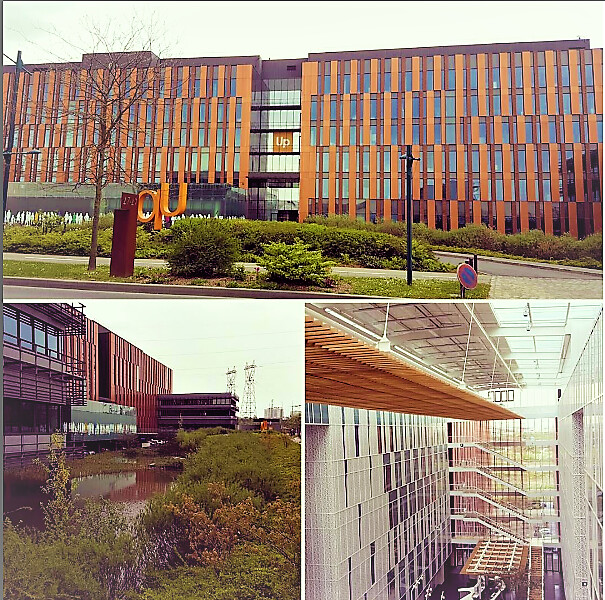 France’s largest worker cooperative, larger than any in the US is Groupe Up. Its new headquarters, pictured, was built in another of Paris’ banlieues, Gennevilliers, and the complex won sustainability design awards. The property features a rainwater retention system and every room in the building has natural light, thanks to its courtyard design.

This is all a far cry from the US context, where the ecosystem is not so well developed. There is very little national legal consideration of cooperatives: the US has no national, worker, consumer or multi-stakeholder cooperative statutes. Other emerging US social and solidarity economy legal forms, such as “B-corps”, are also a state-by-state issue. US laws have, over time, also made it easier for cooperatives to demutualize, and privatize the group’s capital gains, which was often created by generations of member-owners. Regulations can also often make it hard for many types of cooperatives to raise money, and there are no laws like France’s ESS framework, which might encourage cooperatives to join forces with traditional non-profits, foundations, and other related types of organizations, either, to create common cause.

But if you are an American reader, take heart, because the French model shows that it is possible to grow a new economy to scale. Since its founding, America has a long history of close relations with France, and continues to embrace many wonderful French exports, from wine and food to fashion. As much as a third of the English language, too, is drawn from French. Perhaps it’s time we look at embracing some other winning French ideas, like the social and solidarity economy.