The History of a Bogotá Main Street

This is the first in a series of four posts on the impacts of pedestrianizing Bogotá’s Carrera Séptima. To learn more about pedestrian main streets, scroll through this global conversation on the topic. 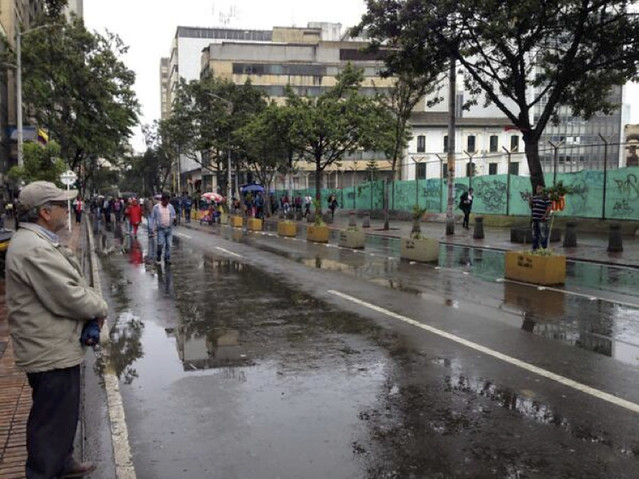 Over the years, Bogotá’s main street, Carrera Séptima, has suffered notable architectural and road changes: building demolitions, varying modes of transport, and most recently the pedestrianization of the street between 11th and 26th streets, which began in 2012.

The City of Bogotá proposed the pedestrianization with this goal:

“place the human being as the center of public policy in an environment that promotes the capabilities and freedoms of citizens without any segregation.”

However, many of those who traverse Carrera Séptima each day do not identify with the project or even the place.

In an effort to understand this street, we created a calendar of 366 days in which the important events in the history of this street are recorded, regardless of year. This investigation of the history of Carrera Séptima is a strategy to identify the events that have forged this site, and have led to the street’s current reality. Through fieldwork in the Carrera Séptima, we (engineering students at Universidad de los Andes) found that there are many challenges to be overcome in the pedestrianization project. We hope that this first step will help generate roots and a sense of belonging in people, and that we can start planning the future we want for this main street.

You can join the project by submitting your knowledge of a historic event that occurred on Carrera Séptima to @historia366 on Twitter or unahistoria.366días@gmail.com.

Instructions for scrolling through the calendar:

1. To return to a special date in the calendar press →

2. If you want to see a specific date click on it. Once you zoom in the month, click again on the date.

3. To return to the calendar press ↓ three times.

Note that the events in the timeline are listed in Spanish but closed captioning in English is available for the introductory video on YouTube at: http://goo.gl/BGyp3p, just select the cc button.