The Poetics and Pragmatics of Participatory Art 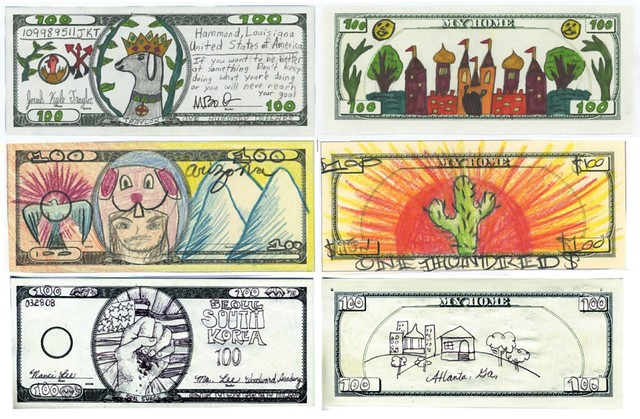 Mel Chin, prolific conceptual and visual artist, is known for bridging the distinct disciplines of art and science, and using creative expression to illuminate issues of social and environmental injustice. On Wednesday Feb 11th, CoLab’s Empathetic Aesthetics Program invited the 2014-2016 Mel King Community Fellow to engage a group of urban planning, architecture and art students and practitioners in a conversation about the role of experimental and participatory art in urban transformation. Much of the discussion was centered around his ongoing community-engaged project, Operation Paydirt, which is the focus of his Fellowship at MIT.

Initiated in 2006, Operation Paydirt invites children, families and communities to imagine, express and actualize a future free of childhood lead poisoning. Central to Operation Paydirt is the Fundred Dollar Bill Project, a creative campaign advancing public education, community engagement and the use of arts to cultivate activism. Fundreds – original, hand-drawn interpretations of hundred dollar bills – have been contributed by nearly half a million community members to demonstrate the power and value of community expression for policy makers and the general public. Working closely with CoLab and DUSP, Mel intends to continue to build and deliver capacity for activism around this important issue and apply this creativity towards policy change at the national level.

Operation Paydirt grew out of one of Mel’s post-Katrina visits to New Orleans, where many artists had gathered to help make meaning out of the crisis. His search to understand the scope of the disaster reconnected him with scientist Howard Mielke. Years before, Mel had conversations with the scientist about lead and soil contamination. Mielke had created a map of the city marked with red zones and numbers visualizing the extent of contamination. Chin asked what it really meant as far as people were concerned and Mielke responded that significant portions of New Orleans’ childhood population were poisoned with lead before the storm.

In follow up conversations, Mel learned about the financial resources it would take to remediate the soil and solve the problem; the estimate was several hundred million, but Mel wasn’t intimidated. Instead he began to formulate a creative solution: Operation Paydirt. He recounts, “a project like this is born out of being compelled to say, well, if we need a lot [of money], then we’ll have to make it.”

For participants, the experience of “making the money” is empowering; it creates a space for artistic expression, advocacy, and education around lead poisoning prevention. Mel notes that it is, “an experiment in creative democracy.” The symbolism is rich; a trading of legal tender for creative tender. But, it is not all pretty. Lead severely impacts physical, emotional and cognitive development. It decreases IQ, and leads to adverse health outcomes. High lead levels in blood have also been linked to criminal behavior. As Mel insisted on Wednesday, when much was being made of the symbolism by discussion participants, “we like the physicality of it [hand drawn currency] because we live in such an ephemeral world [but] human creativity is certainly worth more than $100 over a lifetime. And, it is being endangered by consequences of environment.”

Mel has learned many lessons since Operation Paydirt’s inception. Chief amongst these is the importance of being open to expansion and evolution. With his infectious humor, Mel reflected, “I was cray cray when I thought [Operation Paydirt] would be done in a year.” Indeed, the project has lasted for eight years with no signs of slowing down. The initial focus has expanded beyond soil remediation in New Orleans. An armored truck has driven cross country collecting Fundreds at schools in dozens of cities, lead prevention advocates and scientists have gotten on board, and now the project addresses lead poisoning prevention across a national landscape, with potential partnerships emerging in the cities of Houston and Cincinnati. Explaining how the project has been scaled up, Mel reflected, “Once you get into the public, once you have a drawing from a child from Idaho that believes things are going to change you have to be responsible, it’s no longer just your dream.”

The way Mel sees it, the expansion and evolution of the project, has been required in order to take the “poetic attachments and move them into the pragmatic.” Mel candidly shared that in order do this, he has had to both learn how to communicate with partners from other disciplines and deal with both his own and others’ delusions. He explained, “When you come up with a project there is a certain poetry to it. And there is delusion. Then you realize after the first year it is scary! Things change, people change, projects change.” As the project has grown, Mel has thought increasingly about his own role and responsibility in the effort, and the lasting impacts he would like to see. “When working on experimental projects, one important lesson is that you might need to evolve out of it,” he reflects. Determining when and how to leave, however, is not always an easy balance to strike.

While committed to and pleased with the way Operation Paydirt continues to move from the poetic to the pragmatic, Mel insists that, “it is all the in-betweens that matter.” The success of Operation Paydirt can be defined by neither the initial artistic spectacle nor the delivery of Fundreds to D.C.. Its success lies in everything in-between. From the 4th grader in Idaho who learned about the dangers of lead exposure, to the Congressperson understanding the need for policy change, Operation Paydirt has already made a lasting impact by fostering empathy between those of vastly different backgrounds. Mel argued near the end of his talk that, “engagement is a process of education, and you [first] have to be sensitized.” Art has a unique role to play in this process of sensitization, shedding light on the sometimes-invisible problems we face as a society, and calling forth the creativity and voices of the community to address them.