Posted September 21st 2015 at 1:35 pm by Nidhi Subramanyam
in The Impact of the Mahindra World City Special Economic Zone 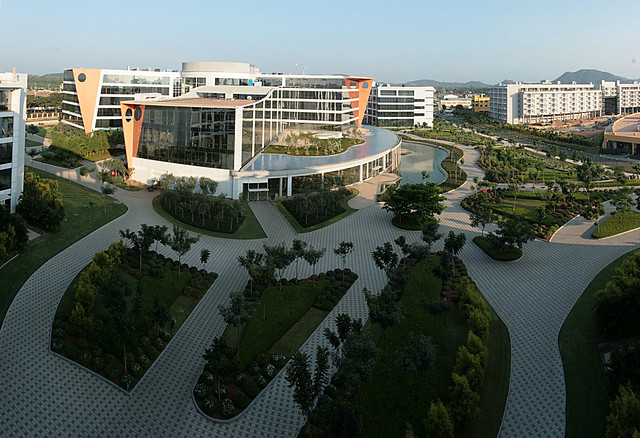 “When someone keeps a  lakh [0.1 million] of rupees in cash in front of you, it’s very hard to resist because we had never seen that kind of money in our lives from agriculture, and probably never would…” reflected Poovarasan, a former farmer from Tamil Nadu’s Kancheepuram district. In the late 1990s, Poovarsan* sold his farmland to the developers of Mahindra World City, India’s first operational Special Economic Zone (SEZ).

Special Economic Zones (SEZs) are geographic areas carved out with the underlying objective of attracting foreign and private investments to promote exports, and in turn increase economic growth and development, by providing zone developers various tax benefits and subsidies. Spatially, they often operate as ‘enclaves’ or foreign territories that are legally, politically, and often socially separated from the regions within which they are located.

The Special Economic Zones (SEZ) Act adopted by India in 2005 is among the most debated policies to have been implemented in the country since the beginning of economic reforms in 1991. Policy makers justified it with claims that it would bring in over US $5 billion in investments and generate nearly 500,000 jobs in rural regions through the creation of new industries and supporting infrastructure.

Critics question the foregone tax revenues, and the acquisition of huge swathes of rural, farmland for the development of these zones in a country where nearly 60% of the population depends on agriculture for their livelihood. Equally contentious but less discussed is the fact that the top down model of development under this policy, largely favors the private sector, taking away the constitutional right of a rural majority to participate in the planning of their regions.

These critiques have led to widespread protests against rural land grabs for SEZs in various parts of India. But, some communities have acquiesced to this ‘draconian’ form of development that takes away both their land and livelihood. 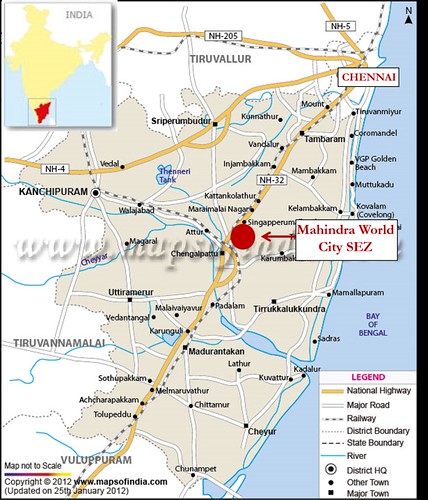 The Mahindra World City (MWC) SEZ, for which Poovarasan sold his land, is located on the urban fringes of Chennai, and is spread out over 1,550 acres of what was formerly agrarian land in eight villages. Prior to the establishment of the MWC in the early 2000s, the eight villages had a combined population of around 10,000 people, and over 62% of the working population was engaged in agriculture, either as cultivators or agricultural laborers. Like most other SEZ’s in Tamil Nadu, MWC is located in peri-urban Chennai to capitalize on the availability of an urban skilled workforce, transportation infrastructure and relatively cheap land costs.

The MWC SEZ developers hired a private land aggregation agency from Chennai to negotiate land deals with farmers. Being outsiders, this agency hired local villagers as middlemen or brokers to understand landownership patterns, broker deals and coax community members to sell their land. To sweeten the deal, community members were promised jobs in the incoming industries, improved schooling for their children in the new school, and overall ‘development’ in their village, including better roads and infrastructure. The brokers also offered compensation packages that were typically on par with or higher than the prevailing value, as determined by the government, enticing people like Poovarasan to sell their land. In fact, other farmers echoed his sentiment, noting, “We got good rates so we sold our lands.”

But compensation packages tell only a part of the story. They do not explain the community members’ assessments of a potential shift towards alternative livelihoods, nor their willingness to part with land, which also holds significance as ancestral property or a symbol of social status in rural Indian society. Besides compensation, people often mentioned the failure or risks associated with agriculture, and/ or an expectation of securing employment in the incoming industries as reasons for acquiescence to land transfers for the SEZ.

Most community members openly voiced their perspective that agriculture was an unstable and risky source of livelihood since profits were very low. This was due to water shortages, unreliable electricity supply for irrigation and the lack of wage labor to help out in the fields. Agricultural laborers were increasingly being employed in the industrial estates and construction sites surrounding Chennai, increasing the cost of the labor supply for agricultural tasks, and resulting in poor profits. A former farmer explained, “We would need to employ at least around 25 women or 10 men per acre per day during the harvest season. [The investment] did not yield a proportionate profit. That is why we sold our lands.” To diversify their income, community members had become accustomed to relying on alternative livelihoods in public utilities such as working for the telephone or the power company. One village president summarized the situation saying, “Agriculture was like a ‘side business’ – if people owned land, then they couldn’t let it lie fallow so they cultivated it for some income. It also helped to grow food at home.”

Unlike agriculture, employment in the SEZ, even if in low-paying jobs, held the promise of a steady salary. For landless agricultural laborers, who typically belong to marginalized lower castes, this was liberating compared to being trapped in traditional, and oppressive caste-based occupations. Many people, landowners and landless laborers alike, did not want their children to pursue agricultural occupations, which they regarded as low-paying and laborious. They wanted their children to study in good schools, and be employed in well-paying industrial or service sector jobs, and they were willing to raise money for these benefits through the sale of their land.

At the same time, despite the promise of better employment and liberation from the hardships of agriculture, not all community members were so willing to part with their only asset – their land. Frustrated with nontransparent brokers, leaders and middlemen and believing the market-based compensation to be unfair, these community members turned to the courts and informal protest through political channels. They demanded justice, and continued to assert their requirements in exchange for transferring land for the SEZ.

The next post in this series will tell the story of these community members who resisted, examining all these years later, whether they succeeded and have been able to realize the promises of better jobs and development.

*Names have been changed to protect individuals who shared their thoughts.