The Relationship between Ideas and Social and Political Movements 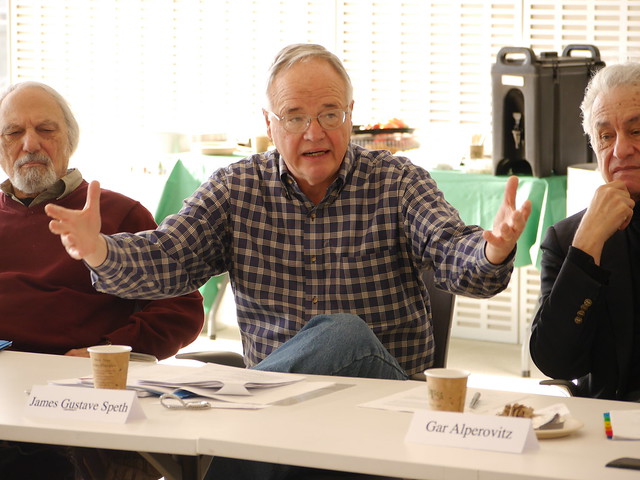 Gus Speth speaking on the immediacy of the climate change crisis.

While the future of American politics and economy were the topic of the recent Next Systems convening, participants spent a good part of the day thinking about the past. In order to consider the stated goal of changing the status quo – roughly defined by the group as an economic system which cannot nurture ecological sustainability or social justice – the conversation reflected on past transformative moments and particularly on the relationship between social and political movements and transformative ideas.

This relationship was put at the center of the agenda at the very beginning of the day. Participants wove together personal anecdotes to suggest that the progressive (even radical) political openings of the past several years (the election of Obama in 2008, Occupy, and the election of de Blasio in 2013) have not been matched by the production or dissemination of transformational “Next Systems” ideas. Without policy tools at the ready, the recent progressive breakthroughs had no concrete proposals to push and either flamed out (Occupy) or were coopted by neoliberal forces (Obama and de Blasio) with little change to the status quo.

Over the course of the day this hypothesis was fleshed out to include 100 years of American history. Several speakers spoke of the twenty to thirty years of intellectual production and radical organizing that laid the groundwork for the progressive breakthroughs of the New Deal. The ascendance of the right in the 1980’s followed the same pattern: conservative intellectuals had been preparing policy ideas and political strategies since the 1960’s. After decades of behind the scenes preparation (even during the relatively moderate Nixon years) the rise of Reagan gave these ideas a vehicle for implementation.

A key takeaway from this historical reflection was that in order to bring significant change to the structure of the US economy and political system, preparation has to begin straight away. Electing progressive politicians and disrupting business as usual with inspiring social movements is not sufficient without concrete ideas to push and carefully considered strategies to push them with.

This perspective is both sobering – in its emphasis on gradualism and the limitations of mass action – and optimistic – in an underlying conviction that a more sustainable and just society is in fact possible. Both of my reactions were heightened by the urgency communicated throughout the day.

Speaking after decades of national leadership in environmental advocacy, Gus Speth implored the participants to grasp the immediacy of the climate change crisis. Other speakers echoed Speth and described a climate crisis in which irreversible damage is just around the corner. Even though the message is not new to me, I found hearing such earnest desperation from distinguished academics with extensive experience to be unsettling. On the one hand there was agreement that transforming American political economy takes decades of preparatory work, but on the other, the group was in consensus that our era’s social and ecological crisis demand immediate action. The moment when it will be “too late” is imminently approaching. To a significant degree, The Next Systems convening was a meditation on the paradox of those two facts being true at once and the beginning of a conversation about what possibilities for action can exist under such difficult conditions.