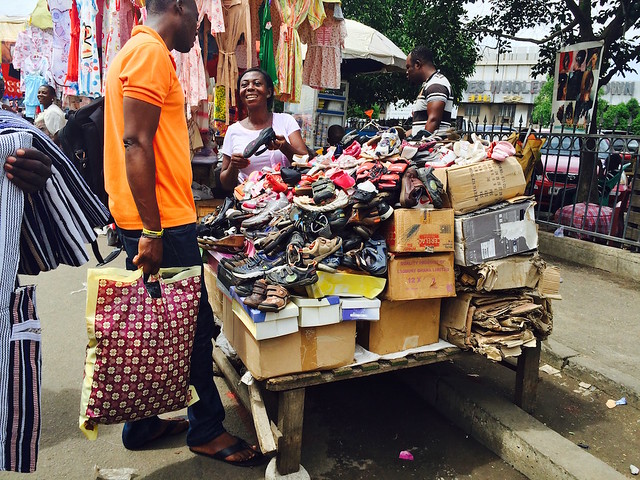 It’s Saturday morning and Kwame Nkrumah Avenue, a high-traffic and high-commerce road that links Accra’s Kantamanto and Makola Markets, is bustling. Walking the 100-meter length of Kwame Nkrumah Avenue from Commercial Street to Derby Avenue offers a glimpse into the lively economic activity at the heart of Accra’s busiest hub. On one end of the avenue, Kantamanto Market has earned a reputation as the city’s most famous secondhand goods bazaar. There, hundreds of traders have created an indoor/outdoor market for goods – from women, men and children’s clothes to curtains, purses, bags and shoes. On the other end of the avenue is Makola Market, built in the 1920s in the heart of today’s Central Accra.

In a series of decades, Makola has grown into a densely packed lattice of streets where multistory buildings and roads teem with commercial trade in everything one can imagine – imported goods and foods, locally made African fabrics and jewelry, as well as schoolbooks, and pots and pans. Together, Kantamanto, Makola (and the adjacent Tudu) Market form the commercial hub of Central Accra, attracting an estimated 70 percent of the city’s traffic each day.

This morning’s street sounds are typical of the area; the hustle and bustle of vehicles and commercial traffic make this place a thriving commercial center. There’s the ubiquitous rumble of vehicles, their rickety engines ebb and flow in line with changes in the traffic light. Trotros (small minibuses) and car horns blare in short bursts that pierce the air. It’s a call to attention for pedestrians and cars alike, a means of indicating one’s presence, one’s intention, as if to say, “Watch out!” “Make way!” or “I’m available!”

Shop owners, street vendors and customers decorate the air with the consistency of conversation and haggling in the local languages–Twi, Ga and Fante. It’s a familiar street rhythm. An old man walks along, singing to himself. Vendors call out to passersby, with greetings, hails and other attention getters, hoping to entice potential customers. 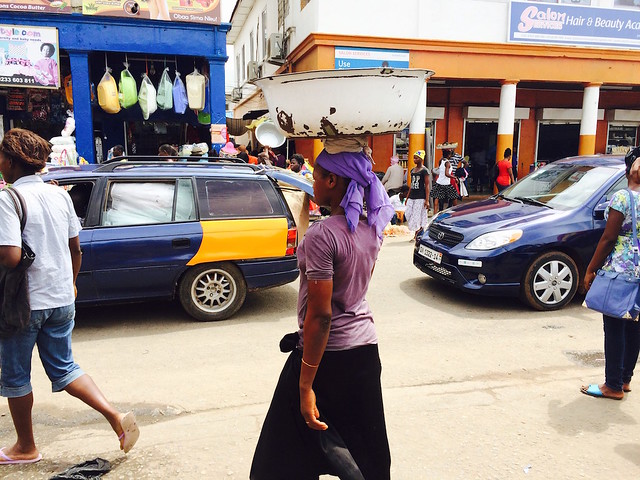 “Pure water!” calls a young female water seller, deftly balancing a load of water sachets and bottles on her head. It’s nearly empty now. Her eyes dart back and forth as she looks for potential customers in all directions. A man forms a kissing sound to call her, and she rushes over.

By and large, the dominating sounds are the transport-related ones. The exhausted engines of vehicles stopped at the traffic light rise in rhythm to the signals of the device. When the light turns green, the vehicles shift into movement, continuing on their journeys. There is a regular series of trotros, many heading in the same direction. The trotro mates – charged with attracting customers and collecting fares holler out the destination of their vehicles. These ones are headed northwest in the direction of Kaneshie Market and the peri-urban areas of Kasoa, Kaneshie, Odorkor, and Mallam. The trotros rarely bear signs noting their destinations. Instead, the mates communicate it in typical style: verbally. 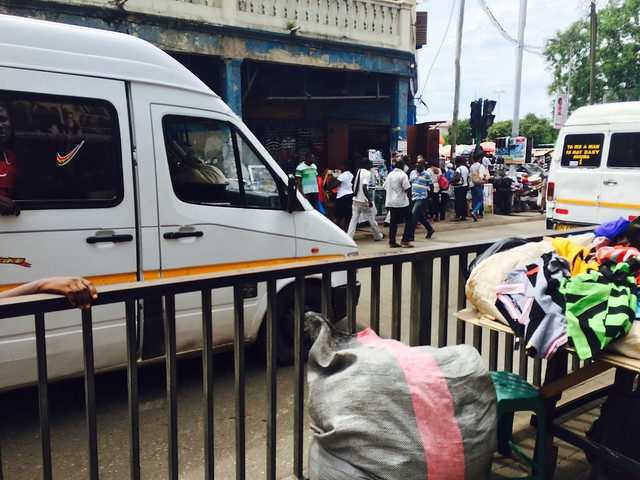 All of these sounds are a normal part of everyday hustle and bustle here, says one shop owner who’s been selling on Kwame Nkrumah Avenue for more than 10 years. Many of the vendors who sell on the Avenue have been here equally long, he adds, if not longer. It’s a hurried, purposeful space all along this street – each person, whether trotro driver or mate, shop owner, sidewalk vendor or street hawker is effectively a businessperson hustling for his or her living. You can hear a certain urgency in the sounds here. Every foot of the landscape is utilized, save for allowing shoppers access. Pedestrians are forced to weave through the traffic, making their way (quickly, but with care) dodging vehicles, products and other shoppers.

Just as the air is filled with sounds, it is commercial activity that dominates this space. There’s a high level of informality, in a city where more than 70 percent of residents are engaged in the informal economy in some form. This commerce forms the heartbeat of the city – so much so that despite Accra’s growth from a city to a full-on, sprawling metropolis, locals still say they are coming to “Accra” itself when they are heading to this area. 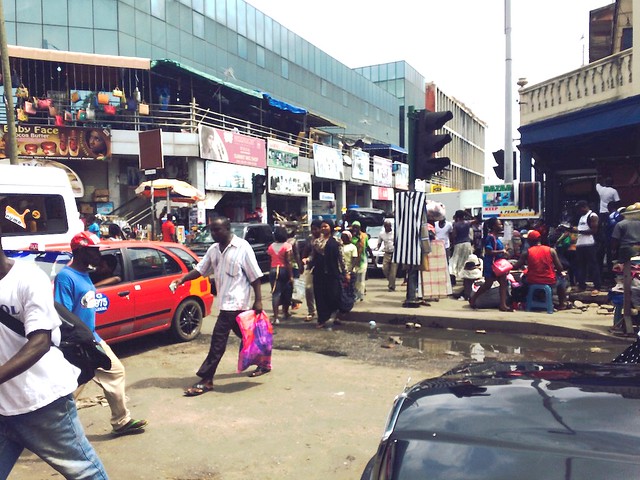 This is one of many posts where CoLab Radio contributors take readers and listeners on a soundwalk in their city. Read and listen to yesterday’s sound walk in Portland Maine, here. If you’d like to submit an example from your own city, see the easy steps here.

One response to “The Sounds of Street Hustle: Accra’s Kwame Nkrumah Avenue”