Posted May 22nd 2014 at 10:07 am by Elif Yasemin Azaz
in Perspectives on Current Events

Protests have erupted again in Turkey. The reason this time? A mining explosion ten days ago on May 12th in Soma, Manisa has led to the death of at least 301 miners.

All kinds of support have poured out from different institutions and different groups, including Turkish youth. Journalists have gone to the disaster area to report on their observations and professional football clubs have been fundraising and publically declaring support for the victims and their families.

There will be a charity match between Atletico Madrid and Galatasaray where the funds raised will support the victims and their families. FC Barcelona, a professional football club based in Barcelona has also issued a condolence message.

Galatasaray, one of the biggest professional sports clubs in Turkey, has a great protest and show of support underway. The exit door of their stadium has been designed to resemble the inside of a mine. When the footballers were going out for the match on Saturday, May 17th, they were wearing hard hats to commemorate the victims of Soma.

Moreover, in response to the disaster, peaceful protests have been staged throughout Turkey. Pictures on instagram show the police attacking protesting crowds with TOMAs, armored water cannon vehicles designed for riot control, like they did in the Gezi protests. Since the Gezi protests, there has been a revival in the outcry against the government’s over repressive policies and implementation. 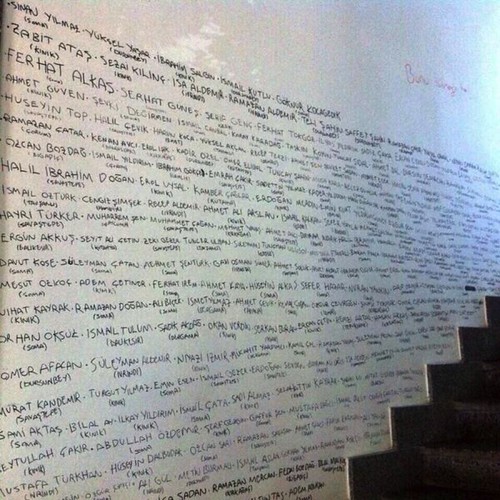 So far, the most organized group has been the Turkey Youth Union; established in 2006 they have the participation of 65 university clubs from 40 universities. The Turkey Youth Union’s goal is to unite the youth towards Mustafa Kemal Ataturk’s revolutionary values and to fight against the assimilation and reactionary attitudes of the State. The Union planned a march from May 17th to May 19th from Samsun, a city on the north coast of Turkey to Ankara, Turkey’s capital. May 19th is symbolic for many reasons. It is the date that Mustafa Kemal Ataturk landed at Samsun, marking the beginning of Turkey’s Independence War. May 19th is commemorated annually as the National Youth and Sports Festival.

Government officials have not said anything satisfying about the disaster yet; so far their statements have been circuitous and lacking in substance. They have claimed that they will take steps that will satisfy public opinion. However, I am concerned. When news recently broke about a huge prime ministry building being illegally built on Ataturk Forest Farm, the Prime Minister’s response was, “It is finished, what are you still fighting for?” Their response is unbelievable!

Our government may cooperate with people who it finds useful, but it puts no value on the middle and lower class. The government’s inability to intervene in the Soma disaster area shows ineptitude and irresponsibility. What type of Prime Minister would say that such disasters are customary? Ours did.

The Search & Rescue Association’s President noted that the laborers’ working conditions were poor and that the technology they were using was not well developed. If so many mistakes had not been made in the first hour of the disaster many lives could have been saved. Moreover, the visits by state officials are negatively affecting the search and rescue efforts.

Mustafa Kemal Ataturk: “Work for your Country that you belong to, not for yourself. The highest work is this.”

What Turkey urgently needs are hardworking youth committed to our country and an honest, responsive government that does not treat their own citizens as enemies.

I hope that these recent upheavals will get us a good result, and put an end to the social and psychological pressure we face; thereby creating the strong, diverse, peaceful community that we, the people, are thirsty for.