What if Urban Development was Resident led? 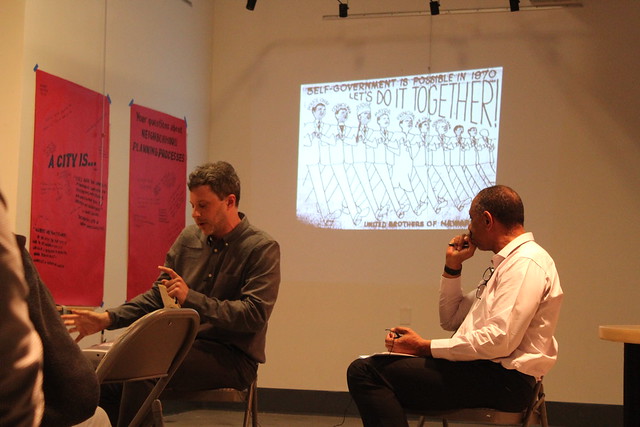 At the second Tuesday session of the People’s Redevelopment Authority (PRA) series, Damon Rich founder of the Center for Urban Pedagogy (CUP) and Ceasar McDowell, professor at the Department of Urban Studies and Planning at MIT came to discuss how cities work from “corner stores to condos,” as prompted by the PRA project creators Design Studio for Social Intervention (DS4SI) and the Fairmount Cultural Corridor (FCC).

What ensued was a couple hours of straight talk: cities don’t work for the people currently living in them, said Ceasar. “We live in the most diverse, complex demographics and we don’t have infrastructures to enable us to act as a public… we need to start afresh, with a new public engagement process for democracy.” Damon agreed. “Planning is often used as a smokescreen that drains the community’s energy and leaves little room for accountable development,” he said.

Long-time resident Carol Carter recalled the clearing of her block during Boston’s urban renewal period.  When the evening began, Carol introduced herself as the “oldest person in the room.” As Damon traced the history of urban renewal in cities around the US and showed images of the clearing of homes in Newark, NJ, Carol leaned in and spoke up. “I remember that,” she exclaimed. Though she was young, she remembers the frustration of the residents forced to leave. She remembers feeling disoriented when she visited changed areas of the city she used to know. Now, an artist and writer, Carol is a local legend whose life was dramatized in the 2015 play Roads to Wisdom: A Community Love Story. She holds the lived memory of another period of change.

Sitting at the Dorchester Arts Collaborative (DAC) in the Four Corners neighborhood, the threat of change outside the community’s control is ever-present. The roar of the trains at the still new Four Corners/Geneva station a block away are an audible reminder. Trains can take and bring new people to South Station in twelve minutes, and potentially displace locals. Gentrification is harder to understand than urban renewal, it’s slower and more complex. “A slower violence,” said Damon. In response, one participant asked: “Who are these people moving in, who can afford these prices?”

Gentrification seems dispersed; individuals move into the old Victorian houses one by one. How do you place a complaint to market forces? Ayako from DS4SI offered a reframing of the question raised about who is moving in, “What attracts people to want to move here?” she asked.  The decision to build market rate condos next to the newly opened train station is clearly an intentional decision. While current developments in the area are mostly affordable housing with mixed use ground levels, residents feel the threat of displacement. 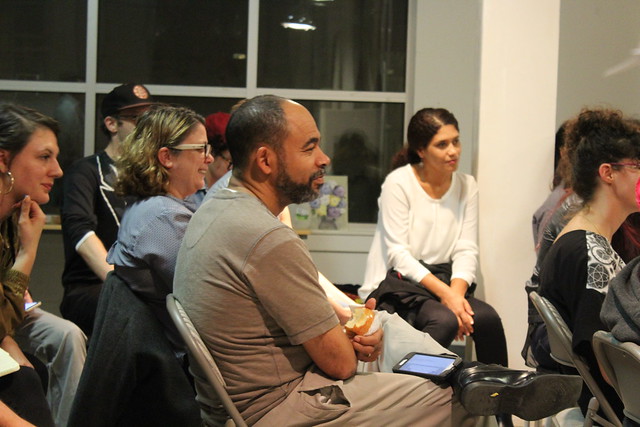 The audience listens attentively at the Peoples Redevelopment Authority session.

Kenyatta Blu, a young local artist recalled attending a meeting at the Boston Redevelopment Agency (now the Boston Planning and Development Authority) and questioning why there was no plan for residents displaced by new, unaffordable development in the project being presented. The board did not address his question; they moved on without response.

Going to public meetings is often a catch-up game; the main parts of the project are set, and have often been in the works for years. According to Ceasar, communities need to drive the development process themselves. For this, communities need an organized infrastructure to:

Such a community process for how to vet projects can help level the playing field between community needs and other municipal plans. To hold the memory of a community’s efforts, “keep the process records in your library’s local collection,” suggested a librarian attending the meeting.

After Ceaser’s comments about communities needing to drive the development process, one resident asked: How do we fight the sense of powerlessness? Damon responded with examples of how CUP works to demystify changes in the city. He spoke about CUP’s projects that “Make Policy Public” through art: explaining why a house was foreclosed, for instance.

Later in the event, Damon shared a story that unpacked the assumptions that led to a particular decision in the critical threshold from public to private space. He led us through the steps that resulted in a new skyscraper in Newark having a spike-topped five foot fence. The developers had initially proposed a ten-foot fence in response to “husbands afraid of their wives working in Newark,” and to prevent people from trampling the grass or smudging the glass. Newark’s image as a dangerous city influenced the designers to create this hostile edge to protect the private space from their perception of a threatening public. But, the resulting environment of fenced-in private spaces compounds the feeling of insecurity.

In response to this story, Ceasar provided another helpful framework, this time for designers and planners:

Different fears encourage stakeholders to hold on tight to the ways things have traditionally been done. Sometimes, fears of unwanted but impending change on the side of the community lead people to feel resigned in the face of an unfriendly bureaucracy. Damon noted that having been on the “inside” as Newark’s Urban Designer, things are complicated, but government is not a monolith.

My takeaway is that inclusive, citizen-led participation and design is still uncharted; we don’t yet know which approaches will stick. Ultimately, I believe that public processes that advocate for the environment, resilience, public space, and anyone on the margins, should not be in the hands of government. These processes should be organized by separate independent public-interest institutions because when public engagement enters city hall it automatically becomes political.

The Public Redevelopment Authority is a collaborative learning space. The space was full of locals and people interested in democratic city design. Join the two remaining sessions of the PRA that will get to the “Imagination Project.” 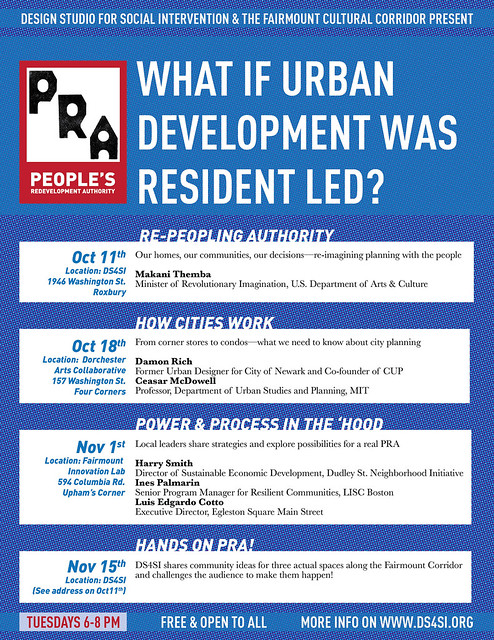