The following is a description of a desperate neighborhood in Thessaloniki, Greece. What would you do next, if you lived here? 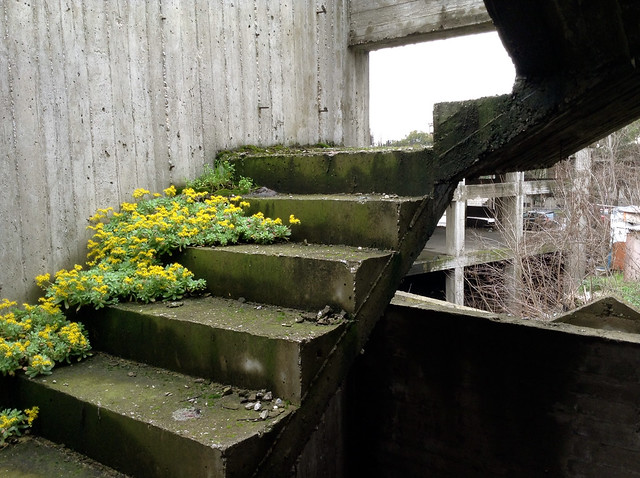 “My neighborhood has become a supermarket of human trafficking,” said Dimitris Tzekis as he walked through Xyladika, a place nearly deserted in daylight hours.

Xyladika is only a fifteen minute walk from bustling downtown Thessaloniki, Greece. When the Greek economic crisis hit in 2010, Xyladika had already been on the decline for years. It was once a neighborhood where woodworkers and mechanics kept shops on the ground floor of two-story buildings, and lived in the rooms above. Today, the area is almost completely drained of a legal economy. 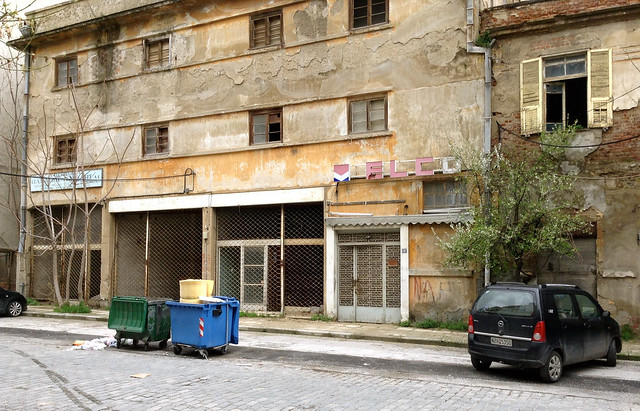 Long vacant buildings in the Xyladika neighborhood of Thessaloniki, Greece.

The girls, boys, men, and women who fill the sidewalks at night, selling sex for money, are mostly from countries outside of Greece. Local residents say that many of them are from Bulgaria, various eastern European countries, and some African countries. They may be victims of sex trafficking, or victims of a brutal economy, but it is unlikely that any but a few are working the streets by preference.

Most renters have fled the area. Streetlights are absent, and walking at night almost guarantees an invitation into someone’s car. Empty lots and sidewalks are lined with trash. In recent years, an informal industry of recycling for profit has bloomed. Sixteen-wheeler trucks make a parking lot of the neighborhood at night. Golden Dawn, Greece’s neo-Nazi party, flies its flags from its 6th story offices in a building overlooking the neighborhood. The party has been able to establish a stronghold in Xyladika. 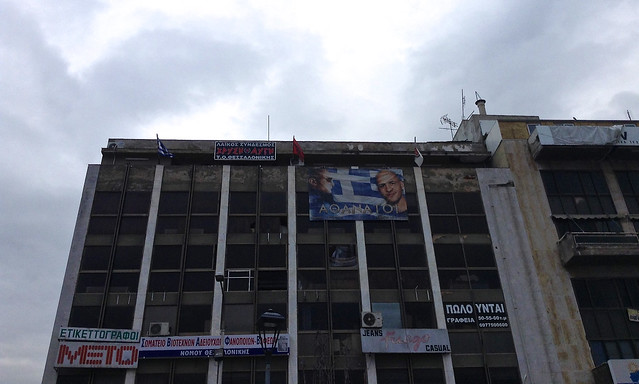 A group of five residents, all homeowners, took me on a tour of their neighborhood in early March. I was in Thessaloniki as a Fulbright Specialist, assigned the task of learning as much as I could about the neighborhood and then presenting what I saw, first in the form of an article for Parallaxi Magazine, and second in a public forum in the neighborhood.

At one point on the tour, Mr. Tzekis asked me if I had eaten recently. I’d finished breakfast several hours ago. Satisfied, he beckoned me to come with him. He took me to this house: 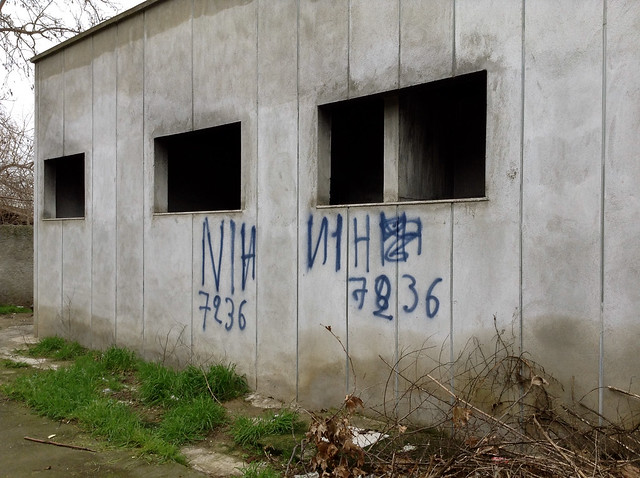 This building smelled like feces from the outside. The doors were open for anyone to walk through. Inside, I found two rooms. Both were littered with garbage, including muddy splotches and shiny red specks. When I looked closer, I found that the red specks were condom wrappers. The muddy splotches were feces, and some so recent, it was still wet.

The only piece of furniture in the building was an old chair in the center of one room, its seat cushion replaced with a piece of cardboard. The residents told me that this house was used for paid sex. 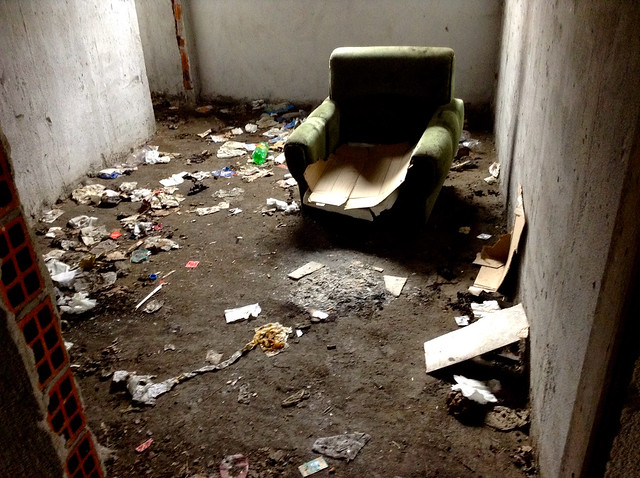 On my own, I found another building in similar conditions. This one spanned the width of the whole block. It was made of striated concrete – beautiful in its way – but was unfinished construction. Giant puddles of feces and trash, including hundreds of used condoms, took up the floor. I walked three levels up a railing-less set of concrete stairs and found more of the same. My feet tingled with the fear of falling on the filth below before I could reach the top.

“This area is the closet of the city,” said Professor Emeritus Sasa Lada of the Aristotle University Department of Architecture, as she pointed to Xyladika on a paper map. I had asked to meet with her to learn more about the area. By closet, she told me, she meant a place where ugly things can be hidden. And by ugly things, she meant something more than just feces and condoms. Xyladika is a metaphor for the “closet” that each of us keeps in our own hearts – “the ugly things of yourself that you don’t want to face,” she said. In that sense, the troubled neighborhoods of the world belong to us all.

I met with a retired transgender Greek sex worker, Nana, who explained that transgender people have few other means of survival in Greece. She herself had wanted to become a tailor, but was turned away for dressing as a woman. At 72 years old, she now lives in a small flat on the other side of the city. She said she risked her life on the street every night, and showed me the scars across her belly to prove it.

Nana remembers Xyladika, when she worked its streets, as nicer than it is today. She recalls café’s and clubs.

Today there is development pressure on either side of the neighborhood. To its east, a small Chinatown is prospering. To the west, a stones-throw from the house with only a chair in it, a new mall and movie theater complex has opened its doors. Developers estimate they are bringing 800 new jobs, during a period in which more than 50% of young people are unemployed in Greece.

Immediately to the south, the city’s former passenger rail station has given a piece of land to the Jewish Community of Thessaloniki. They’d like to build a Holocaust museum there, as the city’s population of 50,000 Jews was deported directly to concentration camps over the course of eight months in 1943. Longtime Xyladika residents witnessed this horror, and remember it. Their adult children, still living in the neighborhood, carry their parents’ memories. They’d like to have a museum in the neighborhood as well, but it seems an impossibility given the economy.

A few West Side homeowners want to turn Xyladika into an arts district. They see the potential. Xyladika, steeped in history, presents an intriguing stage for performers and a unique canvas for artists.

On the same block as the building with the treacherous concrete stairs, beauty peeks through. Along the front of a shop displaying tires of all sizes, eleven birdcages hang in a row along the outer storefront. Above, a painting on a small second floor structure says, “Never too late.” 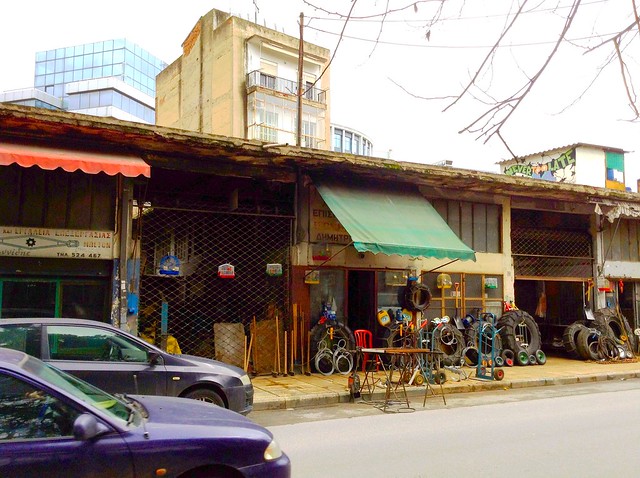