Posted August 19th 2015 at 11:45 am by Jason Spicer and Lily Steponaitis
in Banking On Values in Action

This is the third in a series of blog posts by Jason Spicer and Lily Steponaitis, who are both conducting research on values-based banking in association with the work of MIT CoLab’s 2015-2016 class of Mel King Fellows. They are based at the offices of the Global Alliance for Banking on Values (GABV) in the Netherlands this summer, and are also traveling to meet GABV member banks around the world. 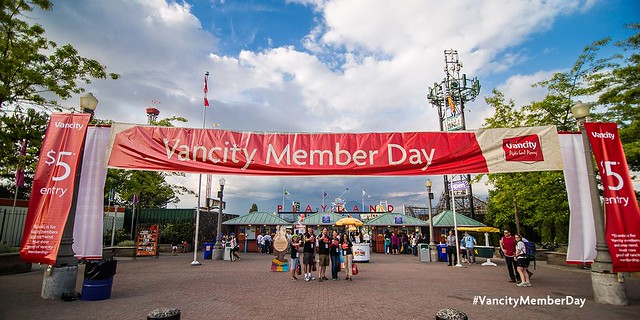 Even though prior posts in this series have focused on values-based banks in Europe, these institutions can be found all over the world, including North America. Earlier this summer, Lily spent a week with Vancity Credit Union in Vancouver, Canada. With over 500,000 members and $18.6 billion in assets under management (AUM), Vancity is the largest credit union in Canada and the second largest financial institution in the Global Alliance for Banking on Values (GABV).

Traditionally, credit unions formed to serve individuals with a shared social bond—otherwise known as a “closed bond.” Shared bonds included: a profession, employer, neighborhood, religion, or ethnic affiliation. While these credit unions offered services to groups of people who would have a difficult time getting financed at a mainstream bank, they also excluded those who did not share the common social bond. The founders of Vancity had a different approach in mind. In 1946, they created an open-bond community credit union, designed to serve anybody in need of banking services in the entire province of British Columbia, with an emphasis on the Greater Vancouver region.

Consistent with its regional focus, Vancity uses its business operations to incubate growth in the Vancouver region ethical economy. The credit union has deployed innovative programs, that use its banking operations to spur connections among businesses and individuals.

For example, Vancity connects business clients with suppliers, partners, and mentors with shared “triple-bottom line” (economy, environment, equity) values, and connects individuals with ethical consumption options. Last year, Vancity piloted Localty, a smartphone app that enables consumers to discover Vancity business members in their area. Through the app, consumers can find discounts and other incentives to patronize and promote these local businesses. Ultimately, the goal is to boost local business and ethical consumption among Vancity members, and provide a tool that draws attention to, and builds the local cooperative economy. 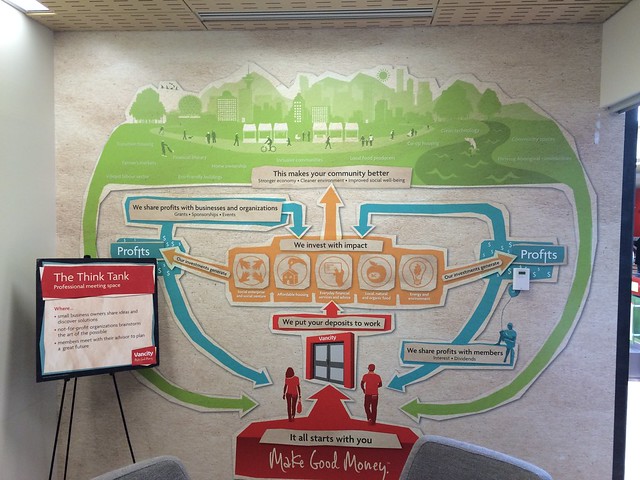 Another example of how Vancity is spurring connections in the local ethical economy is through the revamping of its branch system to provide free rooms for community meetings. These spaces may help foster more connections among bank members and other actors in the social economy because any local group, not just Vancity members, can sign up to use them. By offering needed community space with no strings attached, Vancity is providing an important service while leaving the door open for beneficial network connections and business opportunities to form.

How can the bank afford to invest in these initiatives? Vancity needs to make a surplus. However, because it is a cooperative, it can afford to think about profit differently—in more holistic and long-term ways. In a traditional bank, external shareholders might be looking to squeeze every last loonie (an affectionate nickname for the Canadian dollar coin) out of the customers. But at Vancity, the customers are the shareholders. Up to 30% of net profits are either distributed as dividends to these customers, or reinvested through grants to organizations in the local community.

The bank’s cooperative model also informs the type of businesses and products it chooses to develop. Without external stakeholders exclusively focused on financial returns, the bank is able to choose to take on projects that may not deliver high short-term profits, but may instead strengthen the future economic health of clients. One of the most potent examples of this approach is Vancity’s Fair & Fast Loans. These loans are an alternative to the payday loans that have become an increasingly popular credit option in Canada since the 2008 financial crisis, especially for families living paycheck-to-paycheck. Quick and easy to acquire with very short terms of a few months, payday loans come at a huge and predatory cost. They have the potential to exacerbate cycles of extreme debt, sometimes charging up to 600% APR.

Fair & Fast Loans, of $1,500 or less, are offered at up to 19% APR and can be serviced within 50 minutes. An added benefit of the offering is that, unlike payday lenders, Vancity reports to the credit bureau. This means Fair & Fast can help borrowers boost their credit scores or build a credit history. At first blush, it would seem that a bank would prefer to service a $500,000 mortgage application over a meagre $500 Fair & Fast Loan. The potential returns on the former are much larger than the latter. However, by helping clients avoid preventable cycles of debt, Vancity sees itself as enabling these same clients to one day apply for that $500,000 mortgage, among other benefits. In fact, it is estimated that in 2014, during the pilot of Fair & Fast, clients saved $1 million in fees and interest. This is money that is freed up to be spent in the local economy in other ways.

These unique approaches to profit and community connection are not a side-project of Vancity; they are weaved into the core of its banking model. Vancity does not make money so that it can take a percentage for community reinvestment. Rather, at the heart of the Vancity model is the understanding that banking and community good can be intricately intertwined, or even one and the same.