I recorded the soundscape of French Street Park, a pocket park located in the neighborhood of Shaw in Washington, DC at the intersection of French Street and 10th Street Northwest. I chose to sit and record the soundscape from the bench located closest to the west entrance to the park because I have anecdotally observed this as one of the most frequently used seating areas, and I believed it would capture the greatest mix of park and neighborhood activity. I observed the park at roughly 5:25pm on Thursday, March 15th believing this time would be the sweet spot for park usage considering it was after 9-5ers returned home and before dinner. 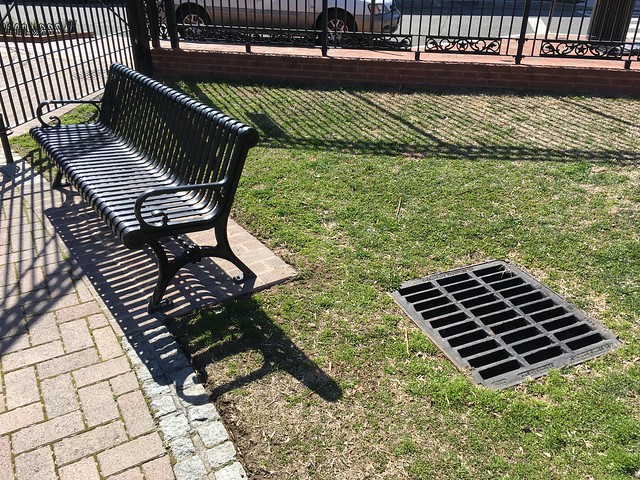 Overall, the soundscape for French Street Park proved largely positive. The constant ambient noises included the rushing water of a nearby (broken) storm drain, birds chirping and the breeze blowing through the trees and wind chimes. One park user described it as “soothing” and likened it to the peaceful sounds of nature, musing that if she closed her eyes, she could picture herself in the woods. I, too, experienced this peaceful sensation, though my rural upbringing precluded me from truly picturing myself somewhere more deserted, as it was impossible for me to completely tune out the sounds of cars, motorcycles, and nearby conversations. The human element, though, was pleasing as well, in that it made me feel as though I was part of a close-knit community. I could hear children playing together in the distance, and neighbors greeting each other as they returned home after getting out of their cars, or while walking their dogs. Furthermore, the sounds of traffic going down the larger arterials of Rhode Island Avenue, 9th and 11th Streets was largely muffled by the surrounding buildings, making it feel somewhat removed from the otherwise dense, urban soundscape.

The tranquil nature of French Street Park’s soundscape could be interpreted as a reflection of how people use parks in rapidly changing neighborhoods. In the 70s and 80s, the park featured a play structure and would have certainly exhibited more immediate sounds of children playing (Boehm, 2014). Furthermore, one neighbor described the sounds as remarkably more pleasant compared to the previous design, when it was an “open air drug market.” While few people used the park as more than a shortcut from French Street to 10th Street during my soundscape recording session, my other observations mostly featured users either sitting by themselves, reading books, or having quiet conversations with fellow park-goers.

Two elements of the park’s soundscape proved more disruptive and controversial. A group of six white men passed the park and were particularly loud (2:55), which I found unsettling and caused me to feel as if they were intruding. Alternatively, if they had been in the park, I likely would not have felt welcome to enter – and I am also a white man, leading me to believe that women or those of another ethnicity or race might have felt even less inclined to enjoy the park if they were present. Additionally, a percussion band of predominantly black men who often practice nearby began warming up (3:46). One white park user confessed that she found the band “annoying” but that she “valued the sense of community” the band brought and left shortly after they began. While I enjoy the band, this could surely be evidence of park usage changing as a result of the rapid change exhibited by the Shaw neighborhood.