A Reflection on the Death of Walter Scott 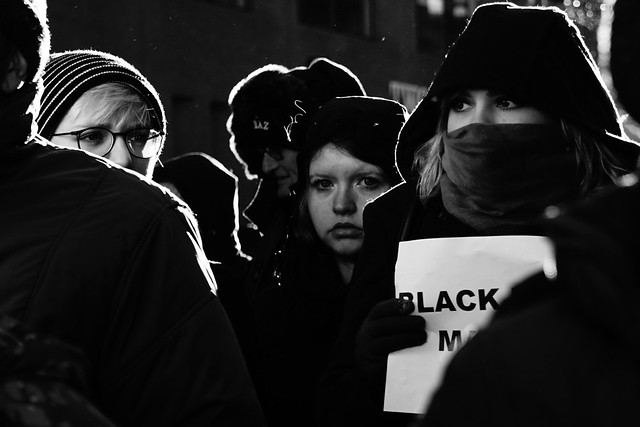 On April 4th, Walter Scott, an unarmed black man, was shot and killed by a white cop as he ran away from the police vehicle after a brief confrontation. This was only the most recent in a string of violent incidents between black male civilians and white police officers that have gained national attention in the past year, and it may not be the last. But the blunt cruelty of the incident has me reeling, and has shaken my faith in a justice system that no longer seems fair or reliable.

As a white middle class kid from the suburbs of New Hampshire, I was relatively ignorant about race issues growing up. The incidents that have reached the spotlight in the past year—from Michael Brown’s death in Ferguson, MO, to Eric Garner’s murder in NY, and now Walter Scott’s death— have forced me to confront issues that I had been foolishly ignorant about. I had never witnessed police violence like that before, and wasn’t aware that it even existed. Now, through my classes as a graduate student in city planning, conversations with classmates, and my growing awareness of social justice issues, I have realized that we are still a far cry from the image of equality I’ve been taught to believe this country is.

I am angered and frustrated by the incidents from the past year. I am ashamed and embarrassed to be associated with a race that continues to inflict violence and hatred on others. I am grappling with how to process the feelings of horror, disgust, and helplessness that come with each of these events. As a white individual, I am not always sure how to help. I fear being part of the problem, and I don’t know how to talk about race. But I know things need to change.

Very few white people talk about race. I struggle with it myself. It’s easy to think it’s not your problem, or that it’s not your fight. I also often wonder what my role should be, or if there is a place for me in the fight for racial justice. But fighting injustice is ultimately all of our responsibility. The lack of public dialogue on race in the white community is glaring, so after some reflection I have concluded that this is where I can add value. I am aiming to become more literate in racial justice issues in the coming months so that I can become a more effective advocate and ally for racial justice among my friends, family, and peers.

As the press coverage of Walter Scott’s murder continues this week, I am sickened again. I want to reach out and support others who may also be struggling to comprehend these acts of violence which so blatantly defy our understanding of justice and equality. It calls into question our roles in the problem, and begs for a larger dialogue of which we all need to be a part. For individuals with more experience in race issues in America, this crime may not be a surprise. For others who are newer to this topic, the events of the past year may be a rude awakening to the reality of racism in this country. Let’s join together in conversation, support, and dialogue to uplift each other during times of pain and work together to put an end to racism. I know I am in this for the long haul. The diversity of humankind is a beautiful thing, and we need to celebrate and protect it.

Post by Jamie Bemis. Photo Credit: Flickr/sunlightrunes. She can be reached at jbemis@mit.edu.