What happens when you Google “anchor institution, urban farming, and social entrepreneurs of color”? The search engine returns a term: Acrefy. At least that’s what happened for me and that led me to its founder, Aton Bridges, in Atlanta. 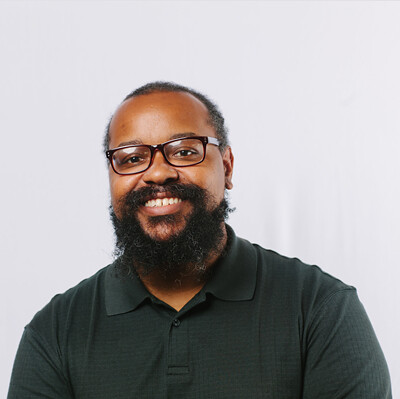 Acrefy is a product built by Aton’s company, Mashamba, in Atlanta, Georgia. It is an online platform that connects property owners with surplus unused land to the city’s growing number of trained urban farmers.  He says it’s like AirBnB, except the stays are longer and the end result is high quality local food that’s delicious!

Originally from a small textile town in North Carolina, Aton is a trained urban agriculture farmer, so he is keenly aware of how much opportunity is wasted by not connecting land to farmers when “urban agriculture” is such a buzzword.

Before starting Mashamba, Bridges was living in Dixie Hills, a neighborhood of southwest Atlanta with a population just shy of 2,000. He constantly thought about all the land (including people’s lawns, vacant and blighted properties, and space under power lines) that sat idle yet could be generating income and tax revenue for the area. 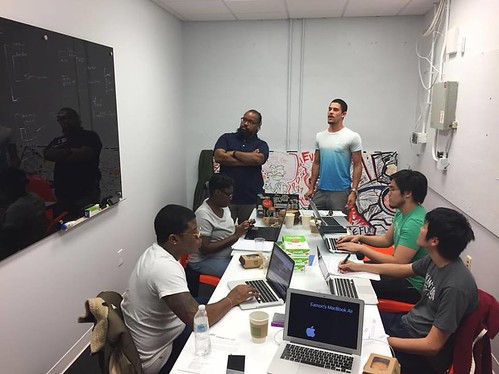 The Mashamba Team at work

So this term: Anchor Institution. It’s definitely academic jargon that most everyday folks, community organizers, practitioners working at community based organizations are not familiar with. Why, then, did I lead a Google search with it? And why include it in the search with the term urban farming? Though the term anchor institution gets lost on most folks who hear it, the notion of what it is does not.

Anchor institutions are large non-profits in cities, that by virtue of their size and longevity, tend to be anchored to a place and aren’t likely to move elsewhere (unlike many nonprofits and businesses that can get up to follow cheap rent or other favorable conditions). Universities, colleges, and hospitals are usually what come to mind, but libraries, museums, cultural and art community institutions, utility companies and stadiums can also serve as anchors institutions.

An critical detail to understand about anchor institutions is do outside of their obvious, explicit, stated intentions. For example: a university is typically thought of as a place to create new knowledge and research. But when put in it the anchor institution context, questions about a college or university’s civic engagement and with their surrounding community come into view.

To put a finer point on it, when we talk about anchor institutions it is largely a discussion about what they are or are not doing as institutional citizens to really create social change and what, in fact, is their obligation.

Over the two or so decades that the term anchor institution has been used, there continues to be much debate about them, their measurable impact, and whose voices are involved and amplified in their partnerships.

And now add to all that to the Post-Ferguson urban context that anchor institutions in cities find themselves in. We are living in technologically rich landscapes where social tech is used by community-based organizations (CBOs) more and more. Tools (old and new) and platforms are supporting connection hyper-locally as well as globally. And many people, in their quest to make cities more just spaces, are investing their time in community building efforts that work to be intersectional and dismantle the hierarchy of human value.

Which brings us back to Aton and why we wanted to talk to him about his work. Aton is a computer engineer as well as urban farmer. He writes code and regularly participates in coding hack-a-thons. In these hack-a-thons, he and his team design software that will support the blurring of the lines of food tech and agricultural tech opportunities in Atlanta. As Aton sees it, the future of food is local, but it’s going to take some tech to help growers synchronize their efforts to serve market needs.

Of course, this synchronization is more difficult than it may sound.

Caroline Williams, a staff writer at CivicSalon, was able to catch up with Aton by phone and talk to him about his work. We wanted to better understand how he blurs the boundaries of technology and urban agriculture to address sustainability issues in Atlanta.

Take a listen to our conversation with Aton on CivicSalon’s podcast, Proximity.

About the Author: Dr. Holly E. Harriel is an independent consultant working on university-community partnerships, anchor institutions, civic engagement competencies and urban community transformation. Prior to her consultancy work, Harriel was the director of education outreach at Brown University. She received her Ed.D. in higher education management from the University of Pennsylvania, holds a masters degree in city planning from the Massachusetts Institute of Technology and is an alumnus of Auburn and Tuskegee Universities. Holly’s work is greatly informed by 20 years of experience working with a wide range of stakeholder groups; as a senior leader at two community development corporations, a cross-sector collaborative neighborhood development non-profit, and a national community economic development funding agency. Holly’s passion for social justice has been the driving force in her career as an urban planner and educator. She can be reached at hello@civicsalon.community.

One response to “Proximity: Aton Bridges on Anchor Institutions and Urban Farming in Atlanta”