This series, Seeing from the Field, is based on interviews conducted with community development practitioners about the values, goals, and premises underlying their work as well as the contours and directions of their ongoing practice. Conducted by graduate students of urban planning, public health, international affairs, and education programs in the Boston area as part of Dr. Lily Song’s Spring 2018 course, “Community Development: Past, Present, and Future,” at the Harvard Graduate School, the interviews highlight the possibilities and dilemmas of operationalizing theories of change in set institutional, spatial, and cultural contexts that are complex, contentious, and shifting.

In the early hours of Wednesday, 14 June 2017 a fire engulfed a London public housing tower block, Grenfell Tower. The fire spread rapidly and resulted in the tragic death of 72 people and made hundreds homeless. The tower was located in North Kensington, a neighborhood within the Conservative-led Royal Borough of Kensington and Chelsea. The borough is deeply divided with life expectancy dropping by 22 years between South Kensington and North Kensington, a difference that has increased by six years since 2010. The south is home to expensive commercial streets containing iconic stores, such as Harrods, and multi-million-pound homes, such as at Kensington Palace Gardens, nicknamed ‘Billionaires’ Row.’ Meanwhile, the north contains one of the two poorest wards in London, where reports of tuberculosis and rickets are rising. 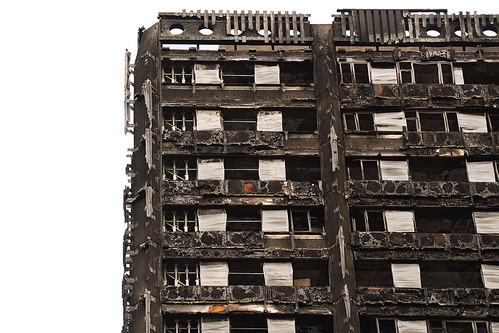 Following the tragedy, a sickening story has unraveled in which regulators are accused of putting costs before the safety of the 24-story building residents. A public inquiry has been launched into the fire, with corporate manslaughter charges being considered for both the Council and the management company, Kensington Chelsea Tenant Management Organization (KCTMO). Furthermore, the Council have been heavily criticized for their immediate and continued response to the tragedy.

Several community-led groups have formed to provide services to those affected, and to advocate for Council and State action and a thorough investigation into what happened. Justice4Grenfell is one such group with four campaign objectives:

The following interview with Tasha Brade, one of the group’s four leaders, discusses Justice4Grenfell’s campaign objectives, challenges and inspirations.

Thank you so much for sharing your work and experiences with me. To begin with I would love to learn a little more about you. Where are you from? And can you describe the work you’re doing right now?

My name is Tasha and I grew up in Ladbroke Grove, right by the Lancaster West Estate. I am a celebrity personal assistant (PA) for actors and musicians. On June 14th everything changed with the Grenfell Tower fire. Before June 14th I was involved in the community but not in campaigning. Then the fire happened. In my community if you don’t know someone who lived in the tower, you know someone who knows someone who did. Everyone was affected.

I live a few minutes’ walk from the tower so was there when the fire was happening and for the days after. Everyone came together with donations. I was distributing food, water and clothing, and organizing alternative rooms. We gave lists to the Council but they didn’t do anything with them. The community ran the response, the Council weren’t there for days.

Two months after the fire I began to experience PTSD. At first, I was confused. I couldn’t understand how I felt this way even though I wasn’t directly involved in the fire. It was around this time that I saw a flyer for Justice4Grenfell. They were organizing a coach to Manchester to protest at the Tory Party conference. I joined for that protest and just felt like I needed to be there doing that and have continued since. 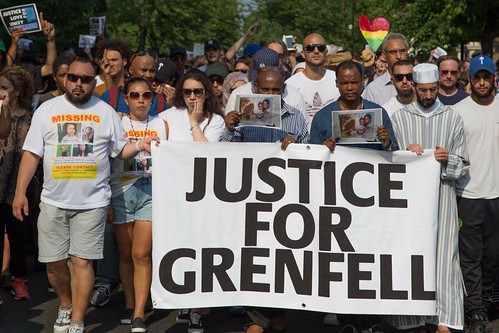 As a group we are organizing campaigns to fight for justice. We are discussing and exposing the racial, social, and economic issues that existed in the lead up to the fire and have continued to exist in the aftermath. The Government and State have developed a negligent and abusive stance to housing tenants. We are not protected and no one will take responsibility for our safety.

What changes is your work designed to create?

We are fighting for both a full and thorough investigation of what happened at Grenfell Tower and for a change to the system to ensure it will never happen again. We want justice for the 72 people who died. 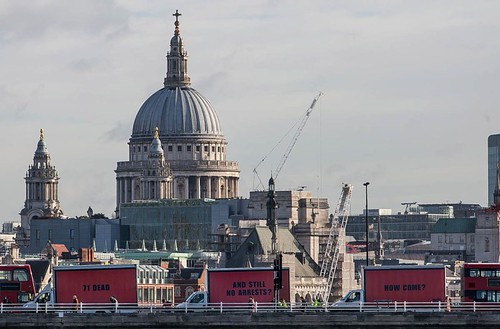 In February we launched our Three Billboards campaign to keep the pressure on the government to conduct a fair investigation. Inspired by the movie Three Billboards Outside Ebbing, Missouri, we had billboards driven around London that read “71 dead,” “And still no arrests?”, “How Come?”. We wanted to ensure the fire remains in national conscience, beyond the news cycle, because it’s still being felt in our community and in others. 72, now, people died and still little has been done by the government. There are still over 300 flammable towers and hundreds of victims are still homeless.

We are fighting for changes in legislation and policy to protect the people who live in social housing and private housing. The current policies are killing people and they need to change. Our advocacy is not about pointing fingers at one person. Instead, we want systematic change.

What challenges are you and Justice4Grenfell facing in your work? 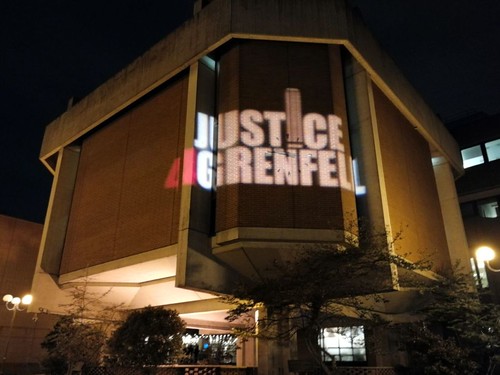 One of our biggest challenges is dealing with the Council. They have been unresponsive both to our attempts to provide information and to receive information. As I mentioned, immediately after the fire they were nowhere to be seen. The community stepped up and filled the gap in government response with donations. Since then, the Council has gone through shifts, with leaders resigning, but it feels like nothing has changed. The Council has not rehoused all the families who were in or around the tower. There are lots of people who are still in hotels. This is illegal in some cases as children cannot legally live in hotels for more than six weeks. Also, the Council published its program and assistance materials in English and did not release translated versions. This is just another example of the Council being out of touch from those who were affected.

We are also facing challenges with the media. There have been articles published that smear our campaign and our community. Some outlets have claimed our campaign is associated with individuals that none of us have ever spoken to or met. Others criticize our community and residents with prejudices and misconceptions about welfare and immigration and more. The stories reveal the race and socio-economic issues Kensington and Chelsea, London, and Britain are facing. We want to show the world who our community really is – our vibrancy, diversity and creativity.

You’ve used the word justice today and of course it’s within Justice4Grenfell’s name. What does justice look like for you?

Having a shared vision of justice has been an ongoing challenge for our campaign and our community. For some people, justice means rehousing and accompanying services; but for others it means prosecution. I think it is both. The survivors need to be rehoused so they can start healing but we also need a full inquiry into who is responsible. If we can get a prosecution then this won’t happen again. A prosecution will force companies and decision makers to consider the risks of their actions. They will be more aware of the costs, in terms of lives, freedom and money.

Is your work inspired by other campaigns?

Our work has been inspired by the Stephen Lawrence and Hillsborough justice campaigns. It took 19 years for Stephen Lawrence’s killers to be convicted, with some still walking free, and 27 years for the ruling that the Liverpool supporters were unlawfully killed because of negligence from the police, emergency services and others. We’ve been talking with some of the campaign leaders and are learning from their experiences of sustaining campaigns for justice.

Justice4Grenfell leadership is all female. How do you see this structure affecting how you are perceived?

Our leadership being all woman is not intentional but something that we have been thinking about a lot. I think it can mean that some people write us off but I believe it also gives us an edge. It’s great for other people, especially from our community, to know there are strong women out there who are working and fighting for justice. I would love to be able to inspire anyone, young girls and women, to also stand up and use their voices for their rights and communities. Amnesty International included us in their map of Suffragette Spirit in the U.K for International Women’s Day. We were honored by this and humbled to be part of this larger community of women working for what they believe is right and just.

There is increasing discussion about the future of the Grenfell Tower site. What do you think should happen with the site and how do you think the final decision should be made?

The bereaved family members, survivors, and community need to be at the center of this process from start to finish. The government has said those affected will be given a veto on the decisions and we need to hold them to this promise. The tower is a crime scene now but when it does come down it needs to be decided together what happens with that space. It might end up being a garden where people can reflect or housing or both. Whatever is decided we need to make sure we don’t forget the people who died and the people who have suffered because of this.

Looking to the future, where do you see yourself and your work headed?

That’s such a hard question because last year I could not have imagined I would be doing this now. Last year I was just a PA and now I am helping on this campaign, it’s been a big change. I think there is going to be a long fight for justice, unfortunately, and I am not going to give up. I want to continue fighting for people and learning about the power that is within people. My future is people, I think.