Posted March 14th 2017 at 8:00 am by Carey Dunfey, Tatianna Echevarria, Juan Constain, David Tisel
in Innovation from the Margins: Colombia

Innovation from the Margins: Grassroots Economic Development in the Colombian Pacific

The Community Innovation School, born in 2014 out of a partnership between MIT CoLab and Coporación Manos Visibles, a local nonprofit that provides technical support and training to community-based organizations, is a capacity building program for leaders from the North and South regions of the Pacific Coast of Colombia. With the support of the Ford Foundation, the EIC (by its Spanish initials) is a space for leaders to develop and advance strategies for economic democracy and self-determination in the region.* In 2016, the EIC was redesigned as an accelerator for twelve grassroots initiatives from different sectors, including eco and community tourism, media and culture, youth empowerment and digital fabrication. This past January, our team traveled to Colombia to learn from these twelve initiatives through a participatory asset mapping process. The data we collected informed the creation of a series of asset maps about the region. These will ultimately serve to encourage the formation of a formal peer network among the initiatives as well as local, national, and international stakeholders.

This post, written collaboratively, is an overview of our twenty one days in Colombia. We hope you’ll enjoy learning about these inspiring twelve initiatives. While our trip began in Bogota, our story begins in the Pacific. 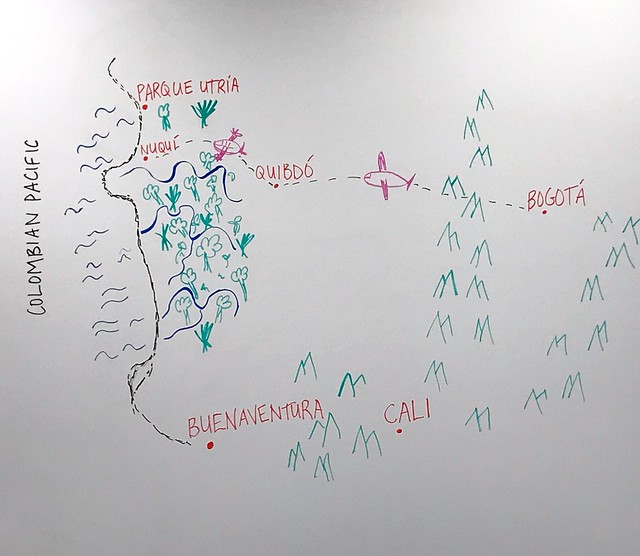 With no direct flights from Bogotá to the small coastal municipality of Nuquí, we first flew to Quibdó, the capital of the Pacific department of Chocó, from which we changed to a 12 person plane. Upon touching down, we immediately boarded a speedboat for a one hour ride on the Pacific ocean waves to the national park, Parque Utría, where the ecotourism organization and EIC member, Corporación Mano Cambiada, has exclusive rights to operate. The term “mano cambiada” refers to an ancestral practice in the Colombian Pacific by which community members interchange goods and services based in relationships of solidarity with each other rather than in monetary value. In 2006, Mano Cambiada was founded on this value system. As an eco and community tourism organization with a focus on equitable community development, Mano Cambiada promotes leadership building, environmental sustainability, and local consumption both in the Parque Utría and in the municipality of Nuquí.

After a few unforgettable days in Nuquí, we headed to Quibdo to meet with four energetic initiatives. We started off with Robótica Educativa, a relatively new initiative that seeks to empower youth through educational programs about robots, drones, and other technological devices. Among their objectives are: to offer a community space where students can learn and improve their technological skills; to empower youth to use these skills to analyze and propose solutions to local problems in their communities; and to provide students with the ability to access economic opportunities.

Our next visit was with Centro de Creatividad e Innovación. This initiative is located in the Casa de Juventud building in Quibdó, a space for youth to participate in a variety of programming in arts, culture, sports, and technology. There, youth can interchange creative ideas to local development problems and/or needs, learn about entrepreneurship, and develop business ideas.

Next, we met with ChocQuibFilms, an initiative that uses film to both inspire youth to express themselves artistically and to guide and teach them about all the steps of the production process. Their films touch on the cultural richness of the Pacific Region, using regional music and dance to construct stories about their realities, ambitions, and dreams while changing the narrative about afro-colombians and the Pacific. The initiative hopes the youth will learn skills that will prepare them for jobs.

Finally, we met with Jóvenes Creadores del Chocó (JCH), a cultural organization with eight years of experience working with some of Quibdó’s most vulnerable and marginalized populations, particularly youth. To combat the insecurity in the communities in which they work, JCH provides programming in theater, traditional dance, and urban dance to youth to bring them together peacefully and artistically. 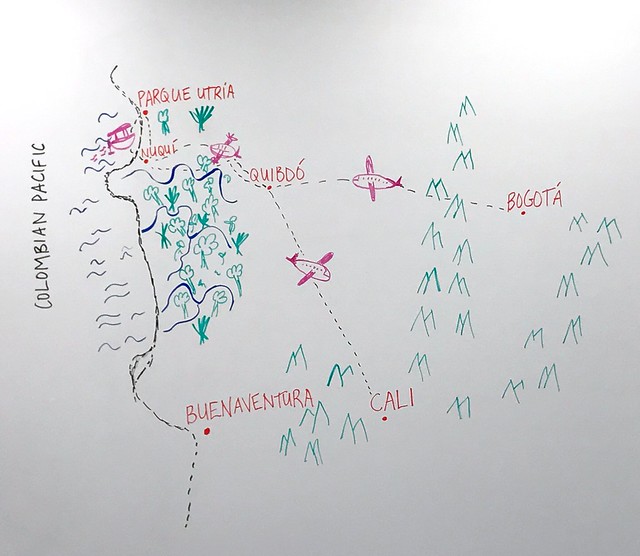 From Quibdó, we traveled by plane to Cali, the city that provides the easiest access to Buenaventura, Colombia’s most important port city. Buenaventura, consistently depicted as being dangerous in the media, is not easy to get to. To get there, one must traverse 78 miles through mountains and a jungle for three to five hours by car, depending on traffic, and wrestle for space with enormous trucks that rumble by at dizzying speeds. Constantly in danger of landslides and erosion, this road is the only connection between Buenaventura’s international port and the rest of Colombia. 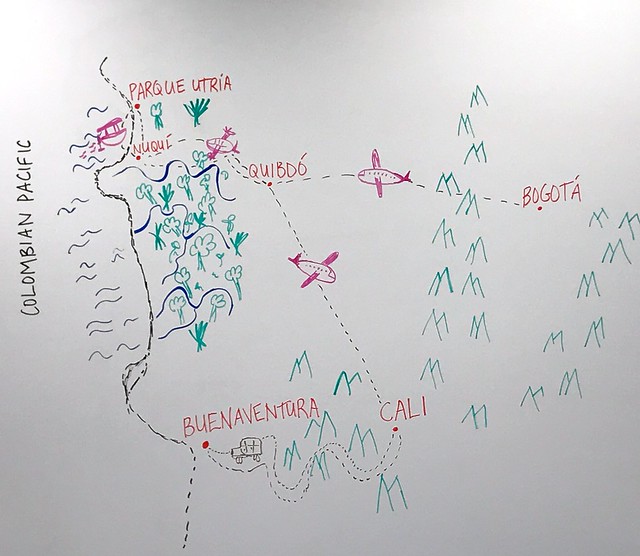 Here in Buenatura, we meet with UrambaLab, a new initiative that is a combination of the Clubhouse Network, an international web of organizations that provide after-school spaces for youth to learn about and improve their technological skills, and a FabLab. UrambaLab’s workspaces inspire creativity and coworking and offer students the opportunity to engage with music production, photography, digital fabrication, 3D printing, among others.

Our final visit was with Colectivo Yemayá. This audiovisual production and communications initiative, tired of being an “object of study” by outside entities, seeks to challenge the assumptions about Buenaventura and its neighborhoods. Instead of focusing on violence and security, they create content that tells the stories of their neighborhoods from the perspective of community members in a way that values their roots, histories, and cultures.

Ending with Colectivo Yemayá brought our trip full circle. The traditional media about the Colombian Pacific doesn’t always paint the brightest picture. However, the inspiring stories from the initiatives showed us a different, clearer, and truer picture of what’s actually going on in the Colombian Pacific: hope, drive, and the desire for a better, more equitable future. 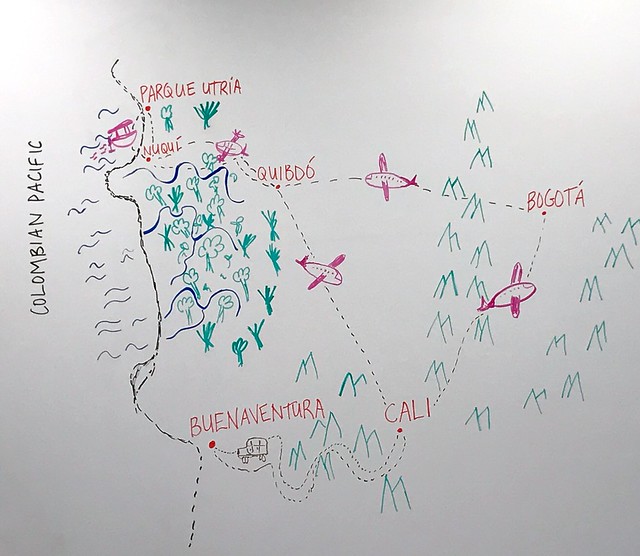 This post is the first of a five part series. The next four posts will include recounted stories about a specific leg/aspect of our trip in the Colombian pacific coast, told through the perspective of one of our team members. While each story will have a unique voice, tone and writing style there will be common threads that connect each experience back to a broader framework. This framework seeks to understand the current status of the region, given previous development practices, as well as the role community based initiatives play in defining and operationalizing economic democracy. Specific themes that will be covered include ideas related to self determination, innovation from the margins, the failure of extractive development patterns, collaboration through the use of social infrastructure, youth & leadership development, as well as asset-based community development. 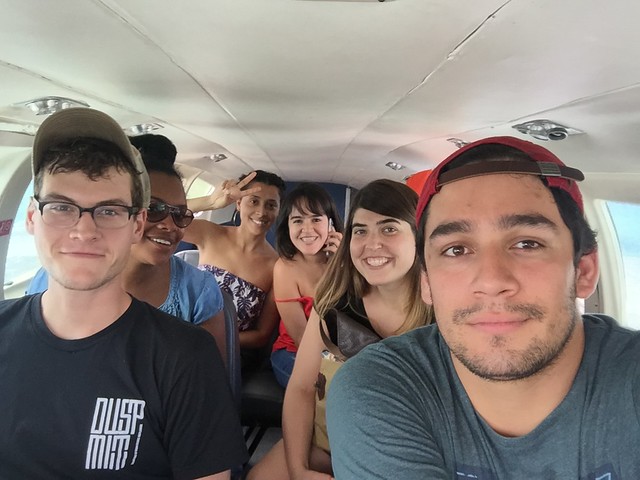 * Economic democracy refers to a framework where economic activities, institutions, and assets are democratically controlled by those engaged in the local or regional economy. Under this framework, ownership of the economy – and decision-making – are in the hands of a larger group. It represents a prefigurative building of structural equality from the very roots of economic power (Malleson, 2013).

By innovation we are referring to the different mechanisms, tools and methods that historically marginalized communities have designed and implemented to respond to systemic barriers, extractive development models, and structural racism. The term also applies to the use of individual, collective, and territorial assets to promote societal change, often using a self-determination narrative.

One response to “Innovation from the Margins: Grassroots Economic Development in the Colombian Pacific”