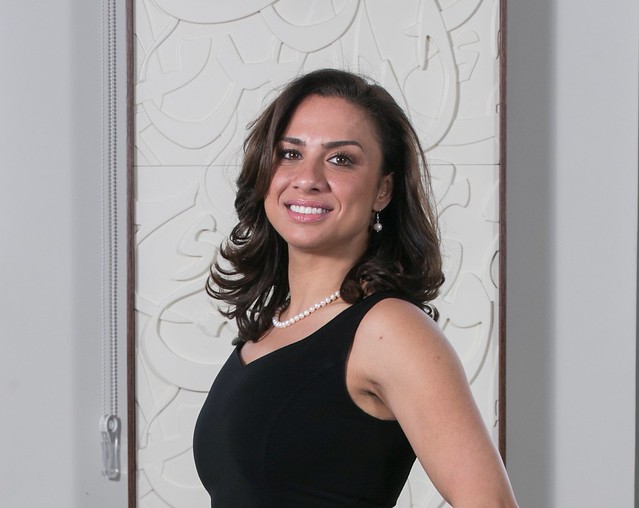 In late 2011, Dana Erekat left the United States and moved back to her native Palestine to work as a planning consultant for a new urban development project. A year later, she was tapped for the position of head of Aid Management for the Palestinian Authority’s Ministry of Finance and Planning. Her new position was under a United Nations contract.

At the time, she had no idea that Palestine would suffer an intense conflict with Israel in 2014, leaving more that 2,000 Palestinians and 70 Israelis dead. She didn’t expect that her job would entail putting a dollar value on damage caused by shelling, and couldn’t predict what exactly it would be like to live day-to-day under occupation.

“Once I got here,” said Erekat, “I had to throw everything I learned out the window and just improvise. Everything you learn in school about developing countries and aid – in Palestine it’s very different because of the conditions of the Israeli occupation.”

Erekat, a dual citizen of the U.S. and Palestine, earned an undergrad degree in Architecture at U.C. Berkeley and a master’s in City Planning at MIT. She returned home to find a vibrant local art scene in Ramallah, and a mind-boggling commute to Jerusalem.

Alexa Mills: What do you do in your role as head of Aid Management for Palestine’s Ministry of Finance and Planning?

Dana Erekat: Palestine is heavily dependent upon aid. Foreign aid represents around 30% of the Palestinian Authority’s budget. We work with about 40 donors – from the European Commission to the European member states, the U.S., Asia, Australia. All of these donors give annual support to Palestine. They give it in three different forms: budget support, development support, and humanitarian support.

Our role is to make sure that the aid coming in is aligned with the priorities of the government. Each donor has its own procedures and commitment years.

The Palestinian government prepares a national plan every three years that sets forth the development priorities in different sectors – economic, infrastructure, social, and governance. And then our ministries are responsible for developing the sector strategies. My job is to coordinate with the donors, and make sure they are supporting the priorities of each sector. My job also entails working directly with the ministries and authorities to make sure the projects they propose are sound, and aligned. We review past investments – what they’ve achieved, what they haven’t achieved.

The most important part of my work, however, is ensuring that development and humanitarian support reaches the most vulnerable communities, especially those at the risk of displacement due to Israeli land grabbing.

AM: What are the challenges?

DE: The biggest challenge is the occupation. Achieving sustainable development with the aid under the status quo is near impossible.

Another challenge is that donors often bypass the ministry and go directly to the implementing agency, because it’s cheaper for them. But that creates project duplication. If we’re not aware of where the funding is going, that makes it extremely difficult to plan, especially to plan the budget. Knowing the whole budget helps us enhance coordination between the ministries. The 2005 Paris Declaration on Aid Effectiveness lays out five principals, and one of them is that donors align support with national priories and utilize the recipient government’s channels.

AM: What is the difference between good aid and bad aid?

DE: It’s not black and white. In principal, good aid should lead to graduating from aid. The whole idea of aid to developing countries is that you give them enough so that they can function on their own, and then they graduate, and they’re not dependent anymore.

In the case of Palestine, that is extremely difficult to achieve. A lot of the aid that comes in is simply a bandage to the Israeli occupation. It’s allowing communities to simply survive. Without the aid, these communities may not have access to water, schooling, health care. So in that case it’s not bad aid or good aid – it’s just needed.

AM: What was your role in coping with the 2014 conflict, and what do you call it?

DE: We call it the War on Gaza of 2014. When the attacks started, I immediately began working with my colleagues to coordinate committees. At that time we didn’t know what would happen next. I was working 14-hour days, 16-hour days.

Two days before the attacks ended, I was finally able to get a permit to enter Gaza. It was extremely difficult to get the permit. The United Nations, at the coordinator level, had to get involved to get me a permit. Gaza is very physically removed from the West Bank where I live, and Israel occupies the land in between. Palestinians on the West Bank are restricted from entering Gaza, and it takes 4 to 6 hours driving to get to there, depending on the borders.

I couldn’t even begin to describe the amount of damages, devastation, and destruction I saw there. We’re talking about full on neighborhoods, fully on the ground. Imagine the distance between MIT and Harvard (about one mile) being almost completely on the ground, shelled. Towers were just completely destroyed. You’d look up and just see skeletons of towers. Families were living in tents everywhere. Some people – even though their houses were demolished – they put tents on their land.

The cease-fire happened one day after I got there, and I spent a week. At that point, my job was to assess the damages. Right after the attacks, I was heading the technical committee for this assessment. My job was to coordinate all of the assessments between the various organizations and governments.

The amount of destruction, for me, was mind-blowing. And then Gaza itself is fully enclosed – and I don’t mean enclosed by barbed wire. No, it’s enclosed by a wall. To enter Gaza, it’s like you’re entering a prison. And to exit Gaza you have to go through – I think I counted seven metal doors. It’s literally an enclosed prison, and not everyone can leave whenever they want.

So after the assessments, the government formed a group specifically focused on the rebuilding. I’m not as involved in that aspect. My role was to work on the assessments.

We’re talking about over seven billion dollars to rebuild.

AM: What is day-to-day life like where you live, in Ramallah on the West Bank? 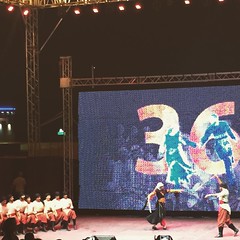 DE: Today was a good day. There were a couple of art exhibition openings and a gallery opening. I have a good group of good friends here, but it’s restricted because Ramallah is very small, and it’s very hard to move from one city to another.

You have to have a permit to go to Jerusalem, which is close by. Thankfully I have a permit, but I can’t drive through the checkpoint because I’m Palestinian. A friend has to drive me.

AM:So how do you get to Jerusalem, as a Palestinian?

I have a Palestinian car. I’m not allowed to rent a car or buy a car that has a yellow license plate. If I were ever caught driving one, I would go to jail. Even though I’m an American – I have dual citizenship in the U.S. and Palestine – my Palestinian citizenship is the one that counts here. My U.S. one is basically obsolete.

AM: Why do you go to Jerusalem? 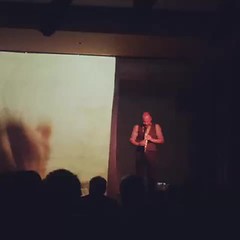 “Brilliant Kevork Mourad & Kinan Azmeh in Ramallah turning music into a live painting that dances in your soul.” Photo and caption by Dana Erekat.

DE: For work, I sometimes have meetings in Jerusalem. I have a United Nations contract, even though I’m based in the ministry in Palestine, so the UN got me a permit to go to Jerusalem. It’s a piece of paper that says I’m allowed to be on the Israeli side between a certain hour and a certain hour. Mine is between 7:00 a.m. and midnight. I can’t sleep there.

If it’s empty and all goes smoothly, it could take ten-minutes to walk through the checkpoint. Or it could be a couple of hours. You have to go through security, like at the airport. You have to be thumbprinted. Sometimes the security guards stop letting people through for 20 or 30 minutes, or even an hour.

I’ve shown up for meetings in Jerusalem an hour and a half late because of this. And my colleagues know; they are very understanding. I’ll say, “I got held up at Qalandia.” This checkpoint is called Qalandia.

And I’m super privileged here. I have a UN card, I have a permit, and I have a U.S. passport. Most people have many more obstacles than I do.

For more of Erekat’s though on planning in Palestine, read her essay Colonial Planning of my Grandfather’s Hilltop.